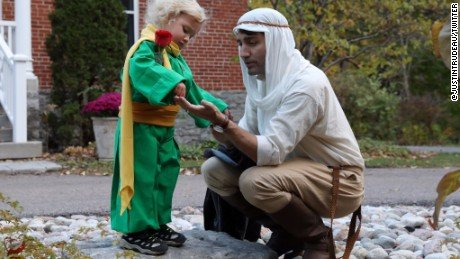 “The Canadians are among thousands of suspected ISIL members rounded up by local, coalition-backed forces in northern Syria. Most have been detained since the March 2019 fall of the Syrian town of Baghouz, the last holdout of ISIL’s self-declared caliphate.”

Check it out–see what it’s all about: Turns out a “Human Rights Activist” wants Justin Trudeau to repatriate suspected ISIS killers. Such is the state-of-affairs within contemporary international politics.

Farida Deif believes she has a right to tell our country to import violent, militant Islamic terrorists. And why not? Seems “everyone is doing it” these days.

Watch as Black Lives Matter push around City Police forces. Witness as National Council of Canadian Muslims demand MP candidates be disqualified because they don’t like what the candidate had to say.

This social inversion is all the rage within PM Trudeau’s “post-modern” Canada. Hey, ingrate 3rd World Muslima journalist from CBC— wanna grind Anglophone Canada into a pulp? Feel free– here’s a daily news column to serve as the vehicle.

Just imagine– an ISIS terrorist priority Canada–just as Farida Deif demands. How sad and sick our nation became after Justin Trudeau got his Anglo-hating hands upon our country.

More “Logic” From The ISIS Supporter:

“Every government must grapple with the potential security risks and political fallout of bringing their nationals home.”

So Canada should make things much worse by way of importing your militant co-religionists, eh?

“But these concerns do not absolve Canada of its duties to protect its citizens, which extend beyond its borders. Abandoning citizens to indefinite, unlawful detention in deeply degrading conditions also will not make Canada safer.”

Yet bringing ISIS terrorists to our dying Great White North will? Damn–these liberal globalist-third world types have some nerve–what the lady says makes no sense whatsoever–therefore, the request may well be accommodated by Trudeau’s Liberal-3rd World government.

“Instead, it denies ISIL victims or their families their day in court, while creating grievances that could perpetuate cycles of violence.”

The poor and the suffering. How many million times can this whining methodology win the day for political 3rd World warriors? Perhaps they are now so used to winning by way of PM Trudeau and Somalian sidekick MP Ahmed Hussen that they now believe “the sky’s the limit.”

CAP has some prudent advice for Farida Deif: be quiet and bugger off. Despite Trudeau-Hussen 3rd World elitism, there are still millions of Canadians who understand right from wrong.

This Deif character has no interest in these particular trivialities. Like her counterparts in the Liberal government, their media slaves and Canada’s academic Anglophone-haters, all that counts is WINNING.

3 thoughts on “Ottawa Citizen: ISIS Terror Suspects MUST BE Brought Back To Canada”