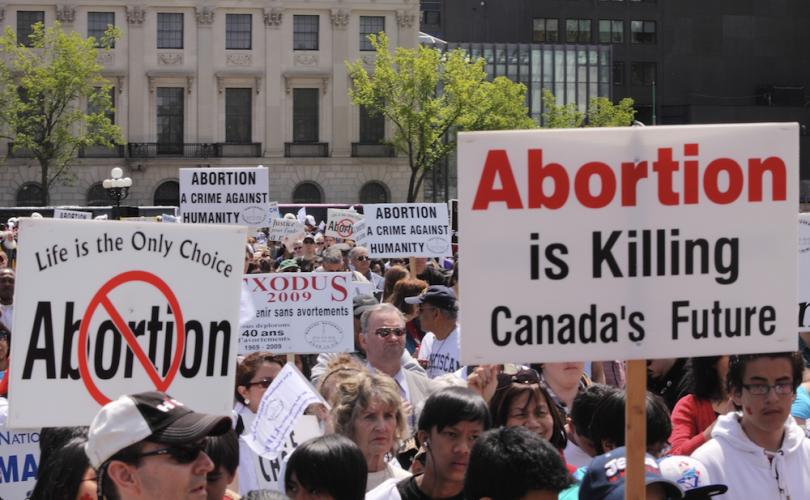 “This is truly the human rights issue of our time,” says Scott Hayward, who’s Catholic and grew up in rural Manitoba in “a very pro-life family.”

“The thing that moves me, if I can say that, is when you look at the number of abortions in Canada every year … generally, the number is about 100,000, which I think is about one in four pregnancies,” Hayward said. “I believe it’s something about 300 children per day are aborted in Canada, which is about one every five or 10 minutes.”

Stop The Press. Let readers understand the true(non- mainstream media) dynamic at play. PM Justin Trudeau informs Canadian that our nation has a serious problem of an aging demographic and workforce.

His pit-bull from Somalia, Immigration Minister MP Ahmed Hussen, tells Canada we must maintain the highest immigration quotas per-capita in the western world, in order to off-set a lack of Canadian workers. Over 90% of these imports come from Hussen’s chosen African, Islamic and Third World nations. These are Hussen’s people, and this is who he chooses to import–even the illegal ones.

What government or media  never speak of is the fact that our current and previous governments could have set up programs to motivate Canadians to have more children in lieu of a problem that has been understood for DECADES. They did no such thing.

What was set up was the most open, no-limits, FULL-TERM permissible fetus destruction. The man who created this was Pierre Trudeau. It was he who placed a European refugee in charge of the program–a man named Dr. Henry Morgantaler.

This sketchy fellow claimed to have personally performed 5000 abortions. At the time, his behaviour was against the law. Memories of Trudeau Dynasty? Of course– both father and son Justin share a tendency for setting aside domestic law to accomplish their ideological goals.

“After the Conservatives were defeated in the 2015 election and the Liberals formed a majority government under Prime Minister Justin Trudeau, who has been supportive of abortion rights, Hayward co-founded RightNow. It’s an anti-abortion group that’s on a mission to help win 50 federal ridings for candidates who identify as “pro-life” during the election in October — and more in the future.”

Hear ye, hear ye–Justin Trudeau is “supportive” of abortion. Talk about down-playing the circumstances.!Trudeau is not “supportive” of fetus destruction–he DEMANDS it. Upon seizing control of Canada in 2015, our PM instructed his Liberal Cabinet and Caucus they MUST vote pro-abortion under all circumstances–a far cry from the benign manner in which the source article describes Trudeau’s attitude.

What else does media eschew? How about the fact that a Trudeau founded mass fetus destruction in Canada, while a current Trudeau family member tells his party they must support the destruction of 100,000 fetuses each year.

Now, we flip to the b-side. If our Canadian-born babies are to be killed off, how does Canada grow its population? Such a simple, basic question–yet Andrew Coyne, John Ibbitson, Toronto Star, and CBC have not once addressed the issue. Not once has National Post or Toronto Sun exposed the relationship between abortion and immigration. Once again, the entire dynamic is overlooked. CTV? Global News? Forget about it.

Therefore, CAP must indulge. The government of Canada’s solution for our fading demographic is found in the importation of the Third World into Canada. These families generally have more children than the Canadian-born. Why wouldn’t they, when the Canadian-born are killed off to the tune of 100,00 per year– 300 per day.

More of what government/media bury: what kind of people most indulge in abortion? Christine Blatchford of the Globe & Mail doesn’t inform us. Nor does Minister of Safety of Women, MP Maryam Monsef. Yes, she is the queen of “safety” alright–for those who want to destroy their unborn child. One wonders how many of her religious co-horts are indulging in abortion. Are Muslim-Canadians  leading in the abortion demographics? Sikhs? A little–they sometimes like to kill off their female children–even some mothers indulge in this practice.

First Nations? Nope. Chinese-Canadians? Marginally, perhaps. No–CAP believe it is Anglophone and Francophone Canada who most indulge in the practice–so why should Trudeau’s chosen religious community leaders and politicians give a damn. Fact is, this situation is “jihad-friendly.” No wonder Justin Trudeau is all over it.

As a corollary, note this commonality between abortion, and transgenderism. Again, this is a point establishment media will never make: abortion weakens Old Stock Canada–and so does transgenderism. Both result in depopulation. Transgenderism renders our male adults and children sterile–no babies. Looking once again to which segment of society most indulges, we find the same result.

Is it Third World Canada which most indulges? Muslim-Canadians. Sikh-Canadians. Chinese or Korean? The folks from the Phillippines? Of course not. Again, it is our “native” populations–in this case meaning Anglophone, Francophones and Christian- Canadians.

Bingo. There’s the bottom line. In other words, these two local population-impeding Trudeau-enforced programs are globalist in nature. From an ideological perspective, these are weapons of destruction. Globalist ethos calls for the erasure of nationalism, patriotism, western values, democracy, as well as the related communities themselves.

Ask yourself– to what degree does Justin Trudeau adhere to the whole affair? 20% 30%? Try 100%–never to waver, transition, augment or re-consider.

This, folks, is globalist destruction at its ultimate. It is the United Nations. It is international banking, multiculturalism, diversity, foreign religious supremacy, and the rest of the Liberal-Trudeau-Globalist malarky.

Want more? All you have to do is vote Justin Trudeau back into office, and witness as everyday of his next four year term as prime minister is dedicated to completing his globalist mission not a single Canadian asked for, or voted for.

Canada as a democracy? Only in a patriot’s dreams.

2 thoughts on “One Out Of Every FOUR BABIES In Canada Aborted, Claim Pro-Life Organization”