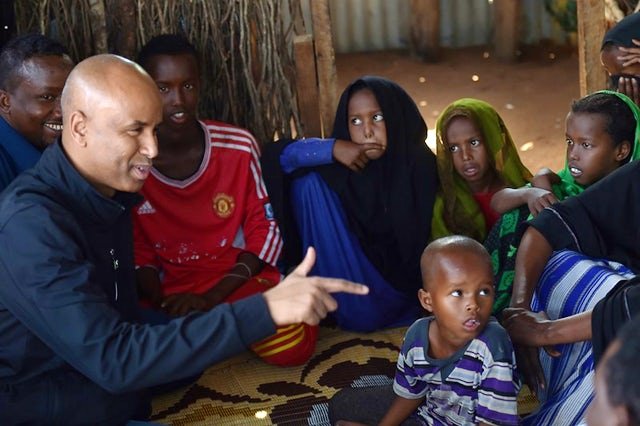 A Waterloo man is suing the prime minister after he says his fiancée was denied a temporary resident visa. Patrick Kinsella requested to bring his Kenyan fiancée to Canada to stay with him after he says he suffered a pair of strokes. But he says Ottawa rejected her visa due to “racist” policies.

“It’s kind of offensive that Canada assumes that anybody who comes here from a poor country, or based on the colour of their skin or race is going to stay here,” he says. He’s now filed a $1 million lawsuit against Prime Minister Justin Trudeau, Immigration Minister Ahmed Hussen and local MP Bardish Chagger.

“I should be focusing on my health and I should have my new family here with me,” he says, tearing up. He says he’ll do whatever it takes in order to get his wife-to-be by his side.

The Trudeau government certainly are strange decision-makers. So Somalian half-Canadian Immigration Minister Ahmed Hussen refuses to permit this lady to move to Canada. Yet, at the same time, this fair-weather “Canadian” permits tens of thousands of illegal so-called refugees to waltz into our nation unemcumbered, and begin to receive welfare cheques within thirty days.

Where is the logic in this? Answer: there isn’t any. After all, we are dealing with Liberal-Globalism–the movement has NO logic. But what it does have is a covert, secondary plot of national transformation.

How many establishment media organizations in Canada have reported this story?  One–CTV News.  No CBC, Globe & Mail, and other usual suspects. CAP can see why. This story tarnishes the Trudeau brand. Therefore, mainstream media eschew the whole affair.

The complainant states the reason for refusal is based upon “skin-colour.” This appears to be the fellow’s subjective opinion. At risk of being overly analytical, perhaps one reason for her refusal relates to the cross the lady wears around her neck. This may be one important clue.

CAP maintain that the Trudeau government maintain a malevolent attitude toward those who follow the Christian faith. We believe Ahmed Hussen dislikes Christianity very much. Same for boss-man Trudeau

The foundation of the Trudeau government policy is not one of fiscal responsibility, deficit reduction, job creation or any other fundamental of democratic, capitalist-oriented governance.

Rather, the government of Justin Trudeau is one of political and social ideology. This calls for the complete trans-formation of Canadian society. Replace democracy with a dictatorship, with King Justin installed as “ruler-for-life.” Transform religion in Canada to elevate the Nation of Islam to the top of the religious food chain. Overwhelm English Canada by way of massive immigration quotas. Marginalize white Canada through accusations of racism and bigotry.

Eventually, a “new” Canada emerges. This is Justin’s handy “no-core-identity-post-modern nation-state” Canada. Within this ersatz socialist nation, Anglophones and Christians will assume the role of a demonized minority community, while Third World Canada assumes control of our nation.

Think about it. In terms of demographic balance,  Muslim and Sikh members of parliament are over-represented within government. In his article, “Why Sikhs are so powerful in Canadian politics,” Vancouver Sun writer Douglas Todd informs us:

“Why do Canadian Sikhs punch so much ABOVE their weight? How, to the envy of other minority groups, are they so adept at turning grassroots activism into serious political clout?

After all, the country only has 500,000 Sikhs, accounting for a little more than one per cent of all Canadians. But more than 12 per cent of federal Liberal cabinet ministers are Sikhs, including Defence Minister Harjit Sajjan.

Fast forward twenty years. The Sikh population doubles, and so does the number of MP’s. Now they have 24% of Parliament, while comprising around 2.7% of the Canadian demographic.

You know what CAP call this? White PRIVILEGE-not!  See the way multicultural globalism rolls in Canada? Let’s be clear: Within contemporary society, white Canadians are accused of maintaining white “supremacy.” Not only by IMAM’s at local mosques, but rather by our government, its MP’s, media, and the academic world.

Yet, the data shows that Sikh Canadians are privileged in a BIG way. 12% of MP’s are Sikh, while their current population is a whopping 1.35% of our overall demographic.

Please do tell– who are the privileged ones?

On this basis 25% of Parliament may well be Sikh within two decades. Is this not a major accumulation of ethnic-oriented POWER within our borders? And guess what– our prime minister wants this. In fact, he created the dynamic in the first place.

Dressing up as a Sikh noble fluent in Sanskrit, Justin Trudeau has pandered, strutted and “bollywood-ed” his way into the hearts of our Sikh community. As an unashamed  political panderer of the highest order, Trudeau has single-handedly empowered our Sikh and Islamic communities beyond what they deserve. After all, neither Sikh nor Muslim culture and values had anything to do with the founding of Canada, its form of governance, or its legal foundation.

So our Somalian religious supremacist immigration minister has denied an African-Christian the right to move to Canada to join her husband. One immigration case doth not make a policy.

It is the big-picture, high level agenda which Old Stock Canada MUST remain vigilant toward. This is the very item media are conditioning Canadians to overlook by focusing on the “minutiae” of Trudeau government policy.