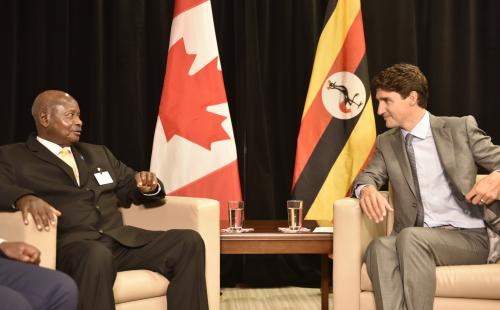 Talk about “accountability”–or a lack thereof. One would imagine that within the world of Canadian economic aid to foreign nations, we could do a bit better than shipping $940, 586,000 to something labelled “uncoded.”  Such is the frivolous nature of Justin Trudeau’s approach to so-called “Foreign Aid.”

Not that there aren’t “coded” entities on the receiving end of government’s massive tax-payer dollar giveaways. For starters, try $254 Million Dollars to Afghanistan in the year 2018 alone.

“Muslims who change their faith to Christianity are subject to societal and official pressure, which may lead to death, imprisonment or confiscation of property.”

“The Islamic Republic of Afghanistan does not recognize any Afghan citizen as being Christian, nor are Afghan citizens legally permitted to convert to Christianity.”

How about Nigeria? In 2018, the Liberals gave this African nation a total of $133 Million Dollars.

“In the gruesome video, the so-called Islamic State said the murders were part of its recently declared campaign to avenge the deaths of its leader and spokesman in Syria.”

The short video was released on December 26th, and timed to coincide with Christmas celebrations.

Celebrate good times, come on. Know what CAP find rather fascinating? How so few Canadians know of the circumstances surrounding the billions of dollars Justin Trudeau is giving despotic Third World, African and Islamic governments.

Reason why: the Canadian establishment media. Basically, CBC, CTV and Globe & Mail hide away all information related to what may be considered an entirely fraudulent foreign aid dynamic.

Ever heard of a phenomenon called “Phantom Aid?” CAP has, but you can bet 98% of Canadians have not. Pourquoi? Because Trudeau’s media puppets are burying the entire scenario on behalf of Trudeau and his globalist string-pullers.

“There is a lot of corruption, [but] most of what we have identified are just head-smacking stupid programs and really poorly managed and no accountability. Nobody is really held accountable for wasting the money,” Special Inspector-General John Sopko said in an interview with The Globe and Mail.

Crazy, isn’t it? Our government hands billions of Canadian dollars to nations like Afghanistan, Pakistan and Somalia, yet demands no accountability regarding the proper designation of those funds.

Dear Afghani Leader-– would you like these monies delivered on a gold, or a silver platter? It’s all so insane–while media have prevented general knowledge of the whole sordid affair.

Then, we find out that in addition to all this financial 3rd World pandering, just under One Billion Dollars in aid is delivered unto a category entitled “Uncoded.” What the frack does this mean?

If Pakistan, Iraq, Ghana and Syria are the “coded” recipients, which countries would be the “uncoded?” Know how many coded nations are listed in the official Liberal Government Foreign Giveaway Program?

Try 50 countries--out of a total of 200-odd nations on earth. Who then are the uncoded? It boggles the mind, really.

And there is more: Another category is entitled “Africa-Regional.” They received a cool $479 Billion. What pray-tell does this mean, when recipient African nations such as Mali, Ethiopia, Tanzania, Congo, Ghana, Ivory Coast, Sudan, Senegal, Mozambique and a dozen more are broken out separately from the Regional component.

Wanna know how CAP see this? As an example of a frivolous, ill-conceived and wasteful program to buy international favour from African and Islamic nations. But just think about this for a moment–what would be the state of our nation if rather than “garbage can” status for some $5 Billion Dollars per-year, a cool $5 Billion was spent on domestic issues within our borders.

Would this not function as a major “shot in the arm” for an improvement to society? Of course it would. So why does it never occur?

Why? After all, there must be some form of upside in this for someone somewhere. Because of the covert, mysterious nature of these activities, CAP is forced to guess as to the reasoning.

CAP’s Guess: The future of Canada is African and Islamic. The current citizens of these nations are the future citizens of Canada. What else does CBC refrain from exposing to Canadians?

The fact that in 2020, the fastest growing populations  on earth–as well as the fastest-growing economies– are found in African nations like Nigeria(set to explode in coming decades), Bangladesh, Ethiopia and other African nations.

Now, please consider these facts relative to general perception within Canada regarding the status of Bangladesh and such. Does your mind not conjure up extreme distress and poverty?

But the truth is, times have changed. At this point in the game, the fact is that Justin Trudeau is lining the pockets of the fastest growing nations on the planet. What is the grand design at play? CAP will go first:

To position these people as future immigrants to Canada–millions of them.

Naturally, in typical fashion, Canadian media will not utter a single word about a nefarious side-effect– Anglophone Canada will trans-sition into a minority community. And not only minor in numbers, but rather minor in influence, power and politics.

Justin Trudeau’s job is to ensure all this flows smoothly. He is tasked with fooling 20 million Anglophone Canadians into believing their communities are not going “gently into that good night” of community decimation.

To achieve this goal, Mr. Trudeau bought the Canadian media. Together, these entities are united in their goal– the trans-formation of Canada from democracy to dictatorship.