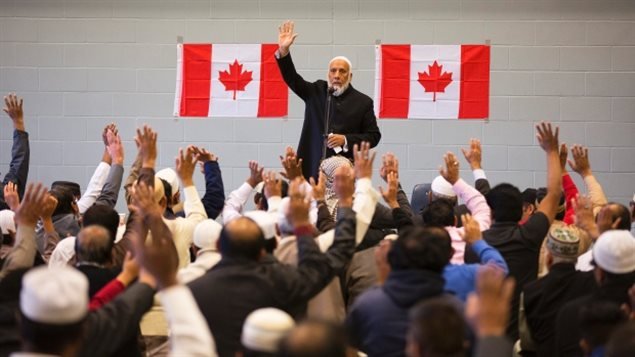 The two-day conference to be held in Mississauga, Ontario from October 8-9, will feature presentations and panel discussions from leaders in the global halal lifestyle industry. Among the growing list of keynote speakers are CEOs of international Halal organizations, global and local experts, distinguished halal standards officials, policymakers and government representatives from across the globe.

“We are excited and pleased that so many CEOs and influential leaders from the halal lifestyle industry have already committed to speak at HEC 2019. Their experience and leadership in the international Halal market will allow for insightful discussions at the first edition of the Conference,” commented Nasser Deeb, Show Director, Halal Expo Canada 2019 “

“The event will reflect the focus on the fast-growing halal industry in North America and raise the standards of the Halal products and services. Having HEC 2019 in Mississauga, Canada, provides a unique opportunity for industry leaders and global policymakers to meet and discuss the Halal business and its current and future challenges.”

“It is the first time ever that such Halal Conference will be held in North America that is widely multicultural and has an evident increase of the Muslims population. With the fast-growing halal market, the event is, expected to draw more than 3,500 representatives of the Halal lifestyle industry, policymakers, buyers, NGOs, media, members of the financial community, and others will be in attendance.”

Man–are these guys ever pumped. Witness the outpouring of pride from community spokesmen. Their population is growing, their markets are growing, Halal is starting to permeate general society, and Muslim leaders, IMAM’s and spokespeople are THRILLED.

Same thing for Anglophone Canada. Well, not quite. For these folks, their birth-rates are decreasing, cost of living is increasing, taxation is rising, divorce and drug addiction is up, while abortion and transgenderism are depleting our numbers.

When speaking of these issues, or attempting to take even a modicum of pride in English Canada, its peoples and its history, the response from government and media is monolithic in its CONTEMPT for our people. We are racists, says King Justin. Bigots and xenophobes, opines MP Iqra Khalid. Racist low-life trash, says Somalian MP Ahmed Hussen.

Now, CAP will lay this on the line in our typical no-nonsense fashion: This social dynamic has the potential to one day DESTROY our communities. If this remains indefinitely, we are screwed– and I will tell you why:

Anglophones and Christians are headed for minority status in Canada. But what were to happen after these folks make the TRANS-ition?  Will the doors of diversity OPEN WIDE as a new privileged minority gains the right to promote their identity in a similar manner employed by our powerful Third World communities?

YES!– on the day hell freezes over. The establishment of minority rights for post-modern minority whites will NEVER HAPPEN. Rather, this identifiable community will remain the nemesis community for Canada’s new majority.

Result? Our eventual social and demographic demise. This, folks, is globalism. It is Justin Trudeau, Ahmed Hussen, George Soros, United Nations, Islam, Open Society Foundation, Emmanuel Macron and Angela Merkel– and all of it spells THE END of freedom and democracy in Canada

“Held at the International Center in Mississauga, Ontario from October 8-9, HEC 2019 will feature more than 30,000 square feet of a nearly sold-out expo floor, the annual event brings together the highest concentration of qualified buyers and decision-makers of the Halal lifestyle industry with attendees in categories such as retailers’ owners and operators, manufacturers, investors, entrepreneurs, policymakers, service providers and many more.”

Wow– Muslimlink are absolutely SWELLED with ethnic pride regarding the big event. What they are less enthusiastic about is the general public becoming aware that Halal dollar intake is often used to fund organizations linked to terrorism.

As it turns out, this community is privileged to have establishment media in Canada at hand to cover up this illicit and often illegal activity. How convenient–wish whitey had such a  privilege.

CAP question: Where is the “Islamophobia” within this whole affair? As non- Muslim Canadians are informed, this is a community suffering gravely from Anglo-on-Muslim racism, bigotry and xenophobia. Yet, here we are, hosting an unprecedented, giant Islamic Expo with dozens of guest speakers, lectures, seminars and training.

Frankly, CAP are not picking up the anti-Muslim vibe in all of this. But remember–the source article comes from Muslimlink, an independent non-profit organization–not from mainstream media.

Then, we pick up the Globe & Mail to read an article by a Muslimah with a hijab complaining about oppression and hatred of herself, and her people. Kind of incongruous with a growing, thriving Halal industry in Canada. After all, if our nation and its people were truly as awful and racist as establishment media make out, the Halal event would not be taking place PERIOD.

What we witness here is not emblematic of an oppressed, down-trodden community struggling to deal with the racism all around them. Rather, we find a community filled with pride, thrilled to be growing exponentially, and down right PUMPED on Islam in Canada.

Then, we have the Anglophone community–racists, bigots and xenophobes with a population shrinking so fast we are headed for minority status within three decades.

This, folks, is the real post-modern Canada as conceptualized by the globalist agenda.

5 thoughts on “North America’s Largest Halal Conference To Be Held In Toronto In October, 2019”