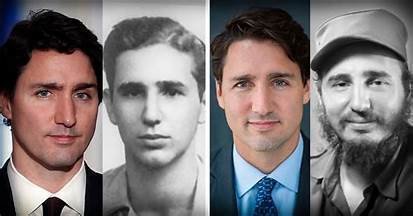 To some degree, one can divide political pundits into two camps: those who eschew conspiracy theories, and those who embrace said theories.

Few CAP followers could deny our party falls into the latter category. In terms of specifics, the examples are endless:

Our ruling government is transitioning Canada from democracy to dictatorship. The Liberals are using mass immigration as a method to control every seat in Parliament. In reality, Justin Trudeau works for the United Nations, and not Canada.

Add one more to the mix: the current social chaos resulting from the First Nations Pipeline Protests in Canada. Is there a purpose for this social calamity which exists one step beyond what media tell us?

CAP believe this for certain. The coast-to-coast protests are indicative of the next phase in the globalist’s plan of national decimation. Marxist theory informs that in order to transition a nation from democracy to dictatorship, two forms of anarchy must exist:

First, Mr. Trudeau imported and empowered Third World Canada to the degree that the original citizenship– sometimes known as “Old Stock” Canada— became disempowered within society. Next, demonize Old Stock Canada by way of branding our communities virulent racists, bigots and homophobes. Follow this with a giant empowerment of Sikh and Muslim MP’s within  parliament.

Now, move to phase two: undermining domestic Canada. Get the original Canadians fighting amongst themselves-– just as it is via the pipeline protests.

And the purpose for this pre-meditated globalist assault? Simple as pie–to steal Canada from its peoples, bring an end to freedom of speech and democracy, and usher in a “new globalist order.”

Truly, this is a veritable “toppling” of Canadian society by way of Justin and his Liberal cultural assassins.

An astute observer may notice a particular trend within the pipeline debacle–it keeps rolling on and on with no resolution. As far as CAP is concerned, Justin Trudeau only gave the green light for RCMP to deal with the issues once he had confirmed the plan would be unsuccessful.

In other words, this saga will continue for as long as possible. Why? Because the longer it continues, the more residual damage will occur within our society. This is what Trudeau’s string-pullers are after, and this is exactly what Justin Trudeau is fulfilling as we speak.

Who knows if this strange Trudeau character even understands how he has been used like a puppet to establish his “no core identity” as the post-modern identity of Canada.

Judging by Mr. Trudeau’s countinance of late, CAP notice a certain deflation in his demeanor. Could it be that Trudeau now realizes how he has been played like a fiddle by the following forces:

In truth, our PM is a used entity. The globalists have used him, chewed him up and spit him out–and still King Justin plays “puppy dog” to banker-billionaire George Soros’ “Open Society Foundation.”

Naturally, all of this brings up a most salient question: How does he get away with it? The answer is surprisingly simple:  communist media tactics. The fact is, if 37.7 Million Canadians understood the truth as hidden away by CBC, 35.7 Million Canadians would demand Justin Trudeau’s resignation.

They don’t–because CTV, Globe & Mail, Toronto Star and the rest are hiding all these truisms from the people of Canada. Fact is, Justin Trudeau has transitioned Canadian media into a replication of media in China. Without this communist-style media control, Trudeau would be finished.

The Canada of 2014 has little if anything to do with the Canada of 2020. Under Trudeau, our nation exists as a grand social experiment. We are, in fact, a globalist “work-in-progress.”

Who is doing the work? One key player is MP Ahmed Hussen, former immigration minister, and current federal minister of families and children. Know what this really means? MP Hussen is Minister of Third World families, and Third World children. These are only form Canadians the man cares about.

Other power-players now include Foreign Affairs Minister, Francois Philippe- Champagne, who stood “puppy-dog” style while Trudeau recently joked with the Foreign Minister of Iran. Another is the entirely silent MP Marco Mendicino, current minister of immigration.

Where Hussen was relatively high-profile, Mendicino is silent as the lambs. Yet, because he is a Liberal Cabinet Member, you just know that behind the scenes he is working like mad to hustle millions of 3rd World migrants into Canada.

This is the way politics roll in Canada. What we have here is a set-up for socialist control of our nation. CBC and the rest play their part by obscuring this development from the people of Canada.

CAP give our nation thirty more years as a true democracy. By this time the socialist transition will be completed, and Canada will move forward from that point as a non-democratic entity in the style of the socialist and communist governments the Trudeau family so admire.