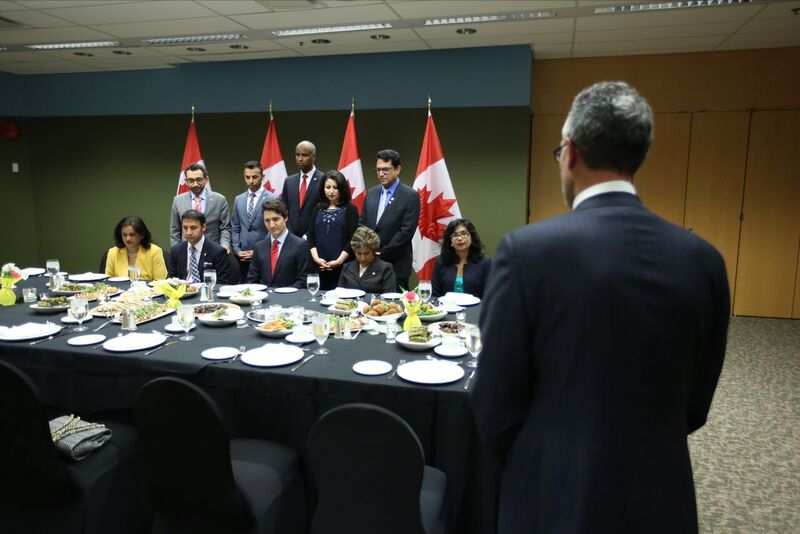 According to a 2015 Supreme Court of Canada decision, political institutions from across the country must remain neutral with respect to religion.

Fascinating it is to discover how this flies in the face of a recent development endorsed by Prime Minister Justin Trudeau.

Turns out that a religious-based Islamic caucus has been established within Parliament. Cultural Action Party bet our bottom dollar that 99% of Canadians have never heard of this committee. Liberal Muslim MP’s Omar Alghabra, Ahmed Hussen, Iqra Khalid and others meet on a regular basis to address Muslim community issues.

Followed by another person who states that “seeing you all together on the Liberal Muslim caucus is heart-warming. We see a team by definition representative of the community.”

It’s may be all sunshine and roses for those involved, yet in reality this could quality as a breach of the law, as well as accepted social standards.

It was in the year 1990 that the Supreme Court of Canada ruled unanimously that a town council’s recitation of the Lord’s Prayer prior to its meetings is unconstitutional. In a 2015 Toronto Star article, current executive of the Canadian Anti-Hate Network Bernie Faber informed readers that:

“The Ontario Court of Appeal unanimously agreed that imposing the Lord’s Prayer as part of Ontario public school opening exercises infringed the right to freedom of religion as guaranteed by the Canadian Charter of Rights and Freedoms.”

In Canada, school-sponsored prayer is disallowed under the concept of freedom of conscience as outlined in the Canadian Charter on Rights & Fundamental Freedoms.

Moving forward, a 2017 Toronto Star article informs us that “the Peel Public [School]Board is providing space for Muslim students to pray as a group. The practice has been going on for two decades — as it has in some Toronto public schools.”

Let us clear away the clutter that would arise from mainstream media analysis. George Orwell wrote of such hypocrisy with his allusions to communism in the novel Animal Farm. “All animals are equal, but some animals are more equal than others.”

What this boils down to is best exemplified with one word: privilege. It is apparent that a single religious community has been granted a right to do what others are prevented from indulging in.

How does one reconcile this with government, media and academic positioning on privilege and oppression within society? The answer is that we don’t. An objective analysis of the dynamics is antithetical to positioning by government and media.

We have here a giant piece of privilege accorded to a specific religious community. The inherent bias against the Christian faith is blatant. No Lord’s Prayer in schools and government institutions.

Bringing to light an observation that CAP has held since the day Prime Minister Justin Trudeau was elected:

Canada in 2021 is an anti-Christian country. What makes it so? The answer is found in an area that government and media never speak of– the future. Of course, just because our controlling institutions do not speak of it does not mean they do not understand it.

The bottom-line is one of demographics. “Old Stock” Canadians– Anglophones and Christians— are out-of-style. Birth-rates of 3rd World migrant communities dwarf the Canadian-born. Christianity is a dying religion, while religions of the 3rd World are in growth mode.

The degree to which our demise is manufactured remains an open question. Abortion has reduced numbers substantially. Euthanasia laws are not helping.

In other words, the future of Canada is 3rd World– and Justin Trudeau knows it. At the risk of appearing paranoid, CAP believe that he loves this.

Away from the media spotlight, special interest privilege has come to dominate society. In the spirit of the transition– a product of Pierre Trudeau’s Charter— a brand new committee has been announced. The African-Canadian Senate Committee is now set to advance interests relevant to their desires.

Do these so-called “progressive” developments reveal the ultimate destiny for our country?  To be brutally honest, the answer is yes.