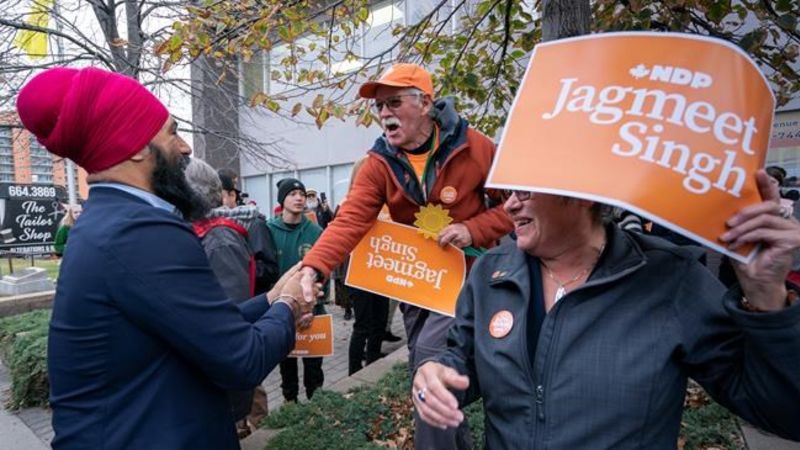 In Justin Trudeau’s Canada, pro-life attitudes toward abortion are shunned on a societal basis. The mere mention of right-to-life brings a look of horror to the faces of abortion policy advocates.

As reflected by our Liberal government in tandem with establishment media, it is one step from criminal to suggest that the life of an unborn child should be held sacred. While so-called “feminists” and progressives push this approach, they cannot hold a handle to attitudes held by federal political party leaders.

Our ruling government is all in on fetus-reduction syndrome. So too NDP Party leader Jagmeet Singh, who vehemence reaches fanatical proportions.

“NDP Leader Jagmeet Singh visited a Fredericton abortion clinic that is struggling to remain open because New Brunswick does not cover abortions performed outside hospitals.”

So a pregnant woman needs to go to a hospital to receive an abortion. What is this, some kind of crime? That abortions cannot take place in the privacy of one’s home is to be considered a travesty? In no manner does Mr. Singh’s vehemence regarding abortion in New Brunswick end here.

NDP leader, Jagmeet Singh, a Sikh-Canadian, wants immediate action on mass abortion in New Brunswick. Why? Is there something special about the Canadian province which makes the NDP leader push to maximize the procedure?

CAP cannot think of a good reason why. The best we can do is provide context in the form  of demographic-based data. According to a Canadian Population Demographics study, a total of 2,790,166 Canadians have been aborted since the Liberal government of Pierre Trudeau decriminalized abortion in 1969.

Moving to the present, an article published this week by CTV News informs Canadians that Canada’s fertility rate reached a record low in 2020. According to data from Statistics Canada, the fertility rate fell from 1.47 children per woman in 2019 to 1.40 children in 2020. Statcan says 2020 also saw the lowest number of births since 2007, as well as the greatest year-over-year decrease in births since 1997.

And Jagmeet Singh is concerned that abortion in New Brunswick can only be performed in hospitals. Since mainstream media neglect this data, they have no reason to report that New Brunswick has the highest percentage of “Old Stock” citizens in our country. The only province to uphold dual English and French official language status, NB is the heartland of traditional Canada.

As opposed to, let’s say, Brampton, Ontario. Forgive our crassness, but we have yet to see Mr. Singh pushing for abortion throughout communities of this majority 3rd World riding. Meanwhile, NDP Leader Jagmeet Singh is calling for free birth control and emergency contraception for Canadian women from coast-to-coast.

“Canadians have fought for the right to abortion, but access is still unavailable in many communities,” said Singh on Wednesday, May 4, 2022.

Translation: Not good enough, must have more.

“We can start by covering the cost of birth control – including emergency contraception – with Universal Pharmacare.”

Translation: Abortion should be free, thereby maximizing the number of procedures.

Readers may want to consider a question that nags at the heart of the abortion issue: who is it that receives the procedures? Which identifiable communities most indulge? The chances that the lion’s share are found among new arrival citizens is unlikely. Rather, the bulk are found among Canadian-born mothers.

“In principal, Sikhism does not view abortion favorably, in fact it takes very strong position against Abortion, as process of bringing life is considered as God’s work and one should not deliberately interfere in it.”

Interesting to juxtapose this with reports from Canadian media: Studies suggest a significant proportion of Indian-origin families in Canada are practising female foeticide, sex-selective abortion.

In June, 2021, a private member’s bill from a Conservative MP to ban sex-selection abortions was voted down in the House of Commons by a margin of 248 to 82.

Two thirds of Conservatives voted in favour of it. The Liberal-NDP coalition voted against it. Nothing shall prevent open season on their sacrosanct positioning.

Back to New Brunswick. Simply stated, this province is all but devoid of Sikh-Canadians. Why is Jagmeet Singh so adamant about instilling systemic abortion in the province?

Seeing as CBC, CTV, Globe & Mail and Toronto Star eschew everything we speak of, they maintain a luxury to ignore the Liberal-NDP panacea to remedy the demise of births on Canadian soil: Immigration Policy.

“Under its Immigration Levels Plan, Canada is now looking to welcome over 430,000 new immigrants each year, which is the highest levels in its history.”

Let CAP offer a point not once considered by Canadian media:

Understanding the demographic reduction of the Canadian-born over the past half-century, the federal government had decades to establish policies motivating parents to have more children. They never did it.

What’s so difficult to conceive? In anticipation of demographic decline, government create financial incentive policies based on the number of children. Two in a family– $200 cheque per month. Three children– $300 per month.

Simple as Nova Scotia apple pie. Just imagine– instead of shipping $2 billion dollars in foreign aid to the Middle East, the funds were directed toward incentives for child-bearing in Canada.

Are we to believe government mentally incapable of instituting such a program? To add salt to the wound, we discover that nearly 3 million abortions have taken place over the past fifty years.

What gives? Did a succession of federal governments– both Liberal and Conservative— have in the back of their minds the idea that immigration should take priority over local births? If so, which political figures have most indulged in pushing forward the practice? Try Justin Trudeau, and socialist sidekick Jagmeet Singh.

A long, sordid and untold tale of demographic transformation it is. One never to be exposed by Canadian media institutions who have witnessed the unfolding of the entire procession.