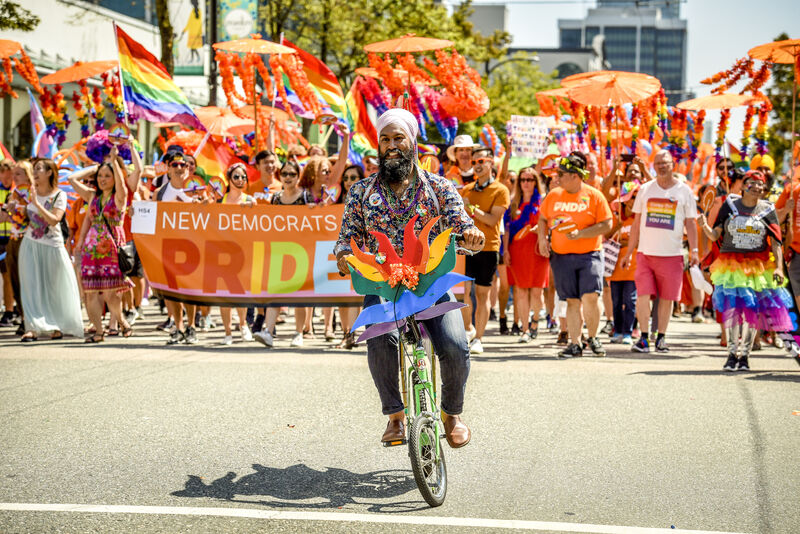 In contemporary Canada, expositions of pride take on a peculiar form– none more unusual than NDP Party Leader Jagmeet Singh’s approach to the topic:

“We must acknowledge that the colonial history of our country has actively had a harmful impact on 2SLGBTQI+ people. Two Spirit and Indigenous LGBTQQIA+ identities were actively attacked and purposefully destroyed. People who were once honored in their communities and held important traditional roles were left shamed, rejected and vulnerable.”

Let us note the New Democratic Party leaders choice of words. Traditionally, Indigenous communities have been accepting of transgender beliefs– hence the term “two-spirited.” In order to dig the knife deeper into the back of traditional Canada, Mr. Singh calls out the lack of acceptance from colonial settlers. In other words, he is insulting the two types of Canadians he most resents: Anglophones and Christians.

Reasonable takeaways: Jagmeet Singh is incredibly bitter toward our country, and its history. Ours is a nation steeped in persecution of homosexuals and transexuals. The reason for it is found in our colonial history. Mr. Singh does not like our national heritage one little bit. In terms of his feelings regarding Aboriginal history, Singh has the following to say:

“There were clearly systems in place designed to kill them.This is not a distant country, this is here in Canada, and the genocide was against Indigenous people. And it is a genocide that is ongoing.”

What to conclude? For starters, everything that CBC and corporate media refuse to acknowledge. This man seriously dislikes Canada. One has to wonder how an individual with such an animus toward our national heritage became leader of a federal political party.

At which point a light-bulb moment arrives: Canada’s prime minister, Justin Trudeau, shares Singh’s animus. No wonder the two recently partnered to lock in a Liberal-NDP Socialist Coalition government until the end of 2025.

Every bit of this is lost on legacy media. They simply don’t get it. Or more than likely, they do get it, but are being funded by Justin Trudeau to ignore the phenomenon. There you have it– Trudeau and Singh– sharing a hatred of Canadian identity, together they control our country.

In what other societies on earth do we find this spurious political dynamic? The answer, of course, is in no other country. Thus rendering Canada unique. Thereby eliciting a salient concept: there has to be a reason for this aberration in social structure.

Without question, there is. Has Canada been selected for a national transformation of magnanimous proportions? Cultural Action Action respond in the affirmative.

Ours is nation has been selected as a prototype western authoritarian society. To facilitate the process, Justin Trudeau and Jagmeet Singh were placed into political office.

“This Pride Month, New Democrats are celebrating the victories of the 2SLGBTQI+ community and recommitting to always fighting by your side for full equality and a future where people can live free of discrimination, homophobia, transphobia, and biphobia.”

CAP offer a corollary: the new Canada will never live free of Anglophobia, Chistophobia, and Heterophobia. These “qualities” have been instilled by Trudeau and sidekick Singh throughout the past six years. Our country is in no manner being freed from hatred. Rather, hatred is transitioning toward Canada’s “Old Stock” communities.

To accelerate momentum, the globalist forces powering the Trudeau-Singh alliance have transcended “traditional” racism. This was accomplished through a carving out of post-modern persecuted communities–homosexuals and transsexuals.

Taken as a united force of oppressed peoples, a war is waged on the so-called guilty parties. This is what Jagmeet Singh is up to with his contrived hatred of Canada.

Now for the bad news: nothing about this is random in development. Every bit of it is part of a pre-conceived attack. Due to its pre-meditated nature, those in opposition have been caught off-guard. We have no resources from which to fight back. When we do, media brand us racists and bigots– another strategy planned out in advance.

Yes sir– the social situation looks mighty dire for Anglophones, and other Canadians of European heritage. The master plan unfolds as directed while our country undergoes an axiomatic transformation.

“This mass grave is a painful reminder of the genocide,” says NDP Leader Jagmeet Singh.

The only problem is, no bodies have ever been discovered in the mass graves. Then again, it’s really not a problem at all. In pseudo-communist Canada, it doesn’t make one bit of difference whether bodies are found, or not.