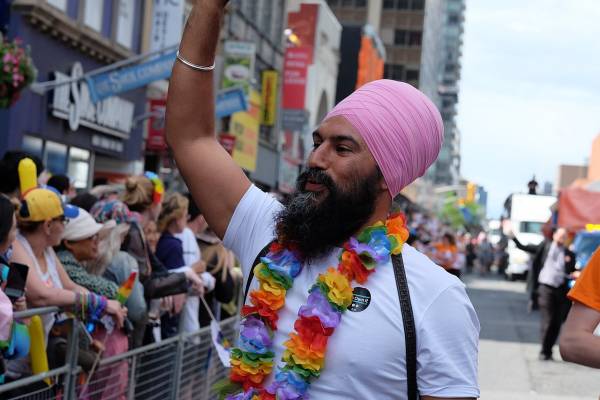 “To brazenly not follow public health guidelines puts people at risk and that is something that we’ve seen with extreme right-wing ideology,” NDP Party Leader Jagmeet Singh recently told reporters in an interview.

How simple it is for political leaders in Canada to play the mighty race-card to their advantage. Jagmeet Singh specializes in this indulgence. In fact, next to PM Justin Trudeau, Mr. Singh is by all accounts the most curious character in federal politics.

As leader of an all-but powerless NDP party, time and again Singh runs to the rescue to prop up PM Justin Trudeau’s iron-clad control of society.

As reported by National News Watch in April, 2021, two proposed changes to the federal budget put forward by opposition parties would determine whether the minority Liberal government would fall.”  A third opportunity to pass judgment on the Liberal budget occurred when the House voted on the main motion to approve the government’s budget policy.

The Liberals required the backing of at least one of the three main opposition parties to survive a vote of confidence, and avoid the possibility of a federal election.

Enter Jagmeet Singh to save the day. Singh’s portfolio these days consists of a certain duality. Either he is protecting what amounts to a Trudeau dictatorship, or he branding Canada a racist, bigoted and xenophobic nation.

What his actual policies are really doesn’t matter. Media don’t give a damn. Yet, when it comes to Canada’s premier obsession– racism within society– Jagmeet Singh is king of the hill.

An orthodox Sikh whose parents immigrated to Ontario from the Punjab, Singh is banned from India for issues relating to Sikh-Hindu ethic conflict. How this serves to qualify this man as NDP party leader is anyone’s guess. Lucky for him, establishment media do not guess at all.

In 2020,  Jagmeet Singh was removed from the House of Commons for refusing to apologize for calling an MP a “racist.” His commentary of his action displayed not a shred of contrition:

People see, do they, Mr. Singh? Which people would that be. All Canadians? White Canadians? Conservatives? My, my–the privileges that wearing a pink turban in Parliament can deliver. Transform Singh’s stereotypes into such coming from an Anglophone MP toward a 3rd World politician, and said MP would be banished as quick as Trudeau can say “His Royal Highness The Aga Khan.”

Thus is the double standard inherent in post-modern Canadian society. Got a beef with the round-up at a Calgary rodeo?  Brand the hides of those awful Canadians racist, and watch the dust fly as they disappear into the darkness.

Don’t get CAP wrong–Jagmeet Singh is far from the only politician stomping around the political fairground screaming racism at every Tom, Dick and Harry Canuck.

Without question, the founder of political race-obsession in Canada is Justin Trudeau. Apart from setting up an erasure of democracy, this is arguably his greatest innovation. Racism in 2021 is not a social malady so much as it is a political weapon.

Jagmeet Singh. Justin Trudeau. Naheed Nenshi. What constitutes racism for these men is simple on conception: racism is anything they want it to be. Forget Canadian law. Toss aside the Criminal Code. Drive the Charter of Rights and Freedoms to the nearest recycling bin.

In terms of crimes within present-day Canada, CAP cannot think of a greater example than the transformation of race to the pinnacle of social issues. Regardless of our ethnic identity, citizens of Canada did not ask for or approve of this state of affairs.

Far more logical it is that the current condition of race-obsessed Canada has been forced upon society by “the powers that be.”