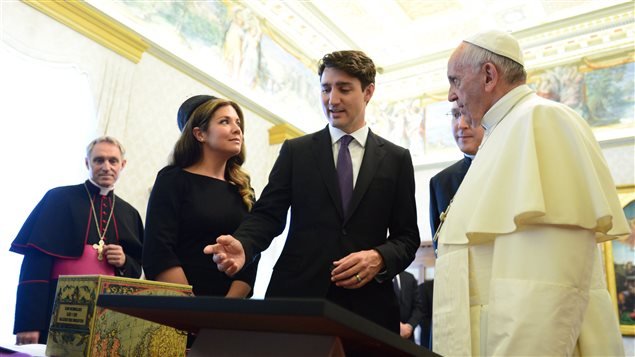 In October 2019, international leaders of Christianity, Judaism, and Islam presented a signed declaration to Pope Francis  expressing their total opposition to euthanasia and any form of physician-assisted suicide, as well as voicing their support of palliative end-of-life care.

The document was signed at the Vatican Oct. 28, 2019 by Archbishop Vincenzo Paglia, head of the Pontifical Academy for Life, along with representatives of the Jewish and Islamic faiths. It was given to Pope Francis during an audience.

On November 22nd, 2019, Canada’s Liberal government  announced that one of their first priorities will be more death by lethal injection (euthanasia) also known as Medical Aid in Dying in Canada.

CAP Salient Question Of The Day: Why does Justin Trudeau want our elderly to be killed off? Blimey–even his chosen people Islam don’t want this–yet PM Trudeau pushes the agenda forward regardless.

So how does media spin away from essential elements of this ersatz destruction of elderly Canadians? Simple–they never mention the actual “demographic” on the receiving end of this Liberal-Globalist lethal injection policy: White Canadians.

Who else would it be? Most Canadians are aware of Canada’s “aging population” problem. Seeing as mass Third World immigration has been around for a “mere” 40-odd years, the bulk of Canadian old folk are Anglophone, Francophone and Christian Canadians.

What conclusion do we come to? Abortion and sex change surgery also impact Old Stock Canada more than any other identifiable community in Canada.

The euthanasia lobby is also demanding that the government remove the requirement that a person be capable of consenting at the time of lethal injection.

Holy Crow–this is wild stuff. Under Justin Trudeau’s pseudo-totalitarian Liberals, a Canadian citizen does not have to consent to their own death. In other words, government and health authoriites(an extension of government) can now decide to knock off Canadians unilaterally. Talk about Orwellian state-control permeating our society.

CTV, National Post, and Toronto Star say nothing. What does this tell informed Canucks?

Simple– communism has arrived in Canada. In truth, this was an inevitability from the moment the cretin Justin seized control of Canada. After all, it’s always this way when another  Trudeau family member became prime minister. It was the same with Papa Pierre, who unilaterally forced Anglo-bashing “multiculturalism” upon Canada’s unsuspecting Old Stock Canadian population.

CAP Observation: It would be one thing if King Trudeau defied Christian and Jewish religious leaders. He has done this every day since becoming PM in 2015. But to defy his precious, chosen Islamic faith? Now, that’s something else.

And the exact reason why establishment media in Canada have BURIED this entire story. Canada in 2019 is not Canada in 1989. It is not even the Canada we knew in 2014, the year previous to Trudeau ascension to pseudo-dictator of Canada.

This is the true “post-modern'” Canada. Patriots know the one– its the one media hide from 37.5 million Canadian citizens– an anti-Christian globalist nation-state currently being trans-sitioned from democracy to dictatorship.

“The paper also affirms the right of healthcare workers to not be coerced or pressured into directly or indirectly assisting in the intentional death of a patient through assisted suicide or any form of euthanasia, especially when doing so would violate the provider’s religious beliefs.”

In Canada, medically assisted suicide has been legal in all of Canada since 2016. Many Catholic doctors in Alberta are worried that they will soon be forced to provide referrals for the procedure.

Ah, yes–2016-– the second year of Justin Trudeau’s tenure as prime minister of Canada. Can you take a hint, fellow patriots? CAP certainly can.

Man, is this Justin character ever a strange duck. The fellow seems to love impeding domestic Canadian populations, while importing the highest number of Third World migrants and their large families in Canadian history.

Media say nothing. What to conclude? Obviously, that media are controlled by the Trudeau government in a similar capacity to how media is controlled in the Trudeau-family hero-nation of China. Coincidence? Of course not–with the globalist decimation program, nothing ever is.

For CAP, Justin Trudeau is Canada’s greatest nightmare. Four-plus years of this smirking, conniving back-stabber is simply too much to take. We want him gone. We need him gone.

Yet, he is not gone— and to make matters worse–he may not be gone for decades–there is no limit on the number of terms a Canadian PM can hold office–a sure-fire sign of a set-up for a pseudo-dictatorship  if there ever was one.

So the Nation of Islam, who sit at the very pinnacle of the totem pole in “No Core Identity” Canada, want assisted-dying dead.Yet Trudeau does not comply, and instead instructs media to hold back on delivering this piece of information to the Canadian public.

Why? No surprise, CAP has a theory: Because even if Islamic IMAM’s and such oppose euthanasia, their people are not the recipients— this “privilege” is reserved for white Canada, so our PM keeps the entire program in place.

What a chump this man is. A real coward, disguising  a Liberal-Global agenda of decimation of our people while appointing a “Minister of the Middle Class” to placate millions of Canadians unaware of Justin’s agenda of cultural eradication for Old Stock Canadians.