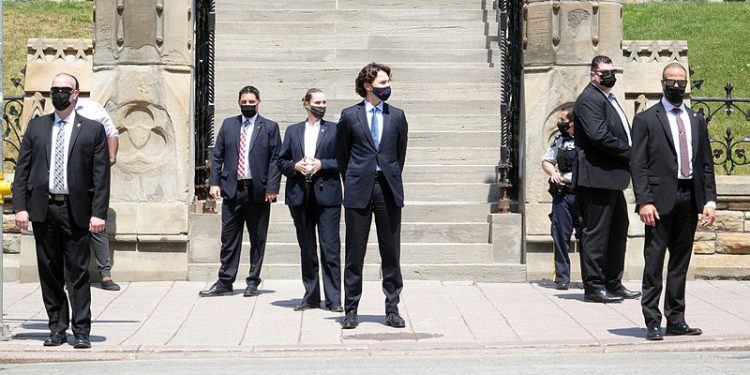 It began in Cobourg, Ontario, before moving forward to Aurora, Ontario. Not that the phenomenon is limited to Prime Minister Justin Trudeau’s tour of his “voter base” in Canada’s most populous province.

On the fringes of British Columbia, a crowd went ballistic on Trudeau, chanting derogatory terms like they are going out of style. During these daily developments, one can’t help but notice a recurring phenomenon.

Witness as masked man Justin Trudeau whispers not one word to the crowd. Instead, he makes a mad dash to the security of his campaign bus.

His attitude is impartial. His facial expressions and body language are devoid of anxiety. Does Trudeau know in advance he is going to be re-elected– no matter what transpires?

Rendering his dive-bombs into a school of sharks  little more than “going through the motions” of what will maintain an image of legitimacy. One point which CAP find unfathomable goes like this:

On this basis, CAP cannot believe that Justin Trudeau has an ability to live with himself. Having been well schooled in psychology, our conclusion is rather grim–  this is an individual that suffers from a mental malady.

Read More: How The Liberal Party and Canadian Media Work Together To Win Elections

Back in Aurora, one protester ends up with her face in the dirt, eyeball to the curb. Despite her circumstances, she keeps on with her verbal attack against Mr. Popularity. This is how dedicated Canadians are as Trudeau walks the streets without uttering a single word. On the positive side, he is rapidly developing his skills to enter the 100-yard dash competition at the Olympic Games.

On the downside, Canadian media are taking the edge off the visceral hatred of our prime minister. To do so is to refuse to report the most salient observation of all:

This is the way politics roll within totalitarian societies such as China. Generally speaking– as time passes– dictators transition to extremely unpopular public figures. Justin Trudeau now qualifies for everything but the title.

Not that his ultimate wish will not come true. Time will tell if he transfers over to official dictator status. Political observers may not know when this will take place, but there is one thing we do know:

It will occur well past the point anything can be done to prevent it.

13 thoughts on “Mr. Popularity: Everywhere He Goes, Justin Trudeau Is Being Booed”