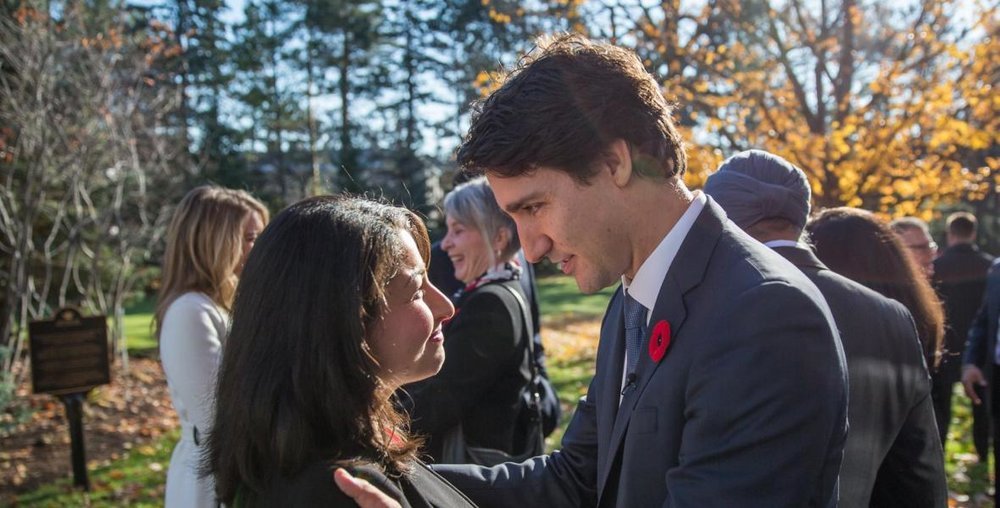 The Honourable Maryam Monsef, Minister for Women and Gender Equality together with the Honourable Ahmed Hussen, Minister of Immigration, Refugees and Citizenship, announced that the government will invest in over 250 projects from women’s organizations and Indigenous organizations serving women across Canada.

IN 2018, MP Maryam Monsef was understood to be the subject of a citizenship fraud investigation. The Toronto Sun says Monsef is under investigation following complaints made to Immigration, Refugees and Citizenship Canada (IRCC) and the Canada Border Services Agency (CBSA).

Of all Justin Trudeau’s cabinet appointments, MP Monsef is perhaps the most unusual. In fact, it is arguable that Monsef’s  story is the most unusual in Canadian political HISTORY. No wonder media barely touch the topic.

Maryam Monsef was born in raised in an Islamic nation–either Iran or Afghanistan–no one is really sure. She was elected to represent the riding Peterborough—Kawartha as a Liberal member the House of Commons of Canada in 2015.

In 2014, Monsef had been offered a job in Afghanistan, but was unable to enter the country because of security concerns. She then went to Iran to work on relief efforts for Afghan refugees, which encouraged her to focus on political endeavours.

Monsef was appointed as Minister of Democratic Institutions in Justin Trudeau’s  Cabinet on November 4, 2015. In other words, the ink was BARELY DRY on her passport stamp when our PM appointed her to a high level government position. She has variously been referred to as the second- or fourth-youngest minister ever appointed to the Cabinet.

Let us understand this in its proper, non-establishment media context: Justin Trudeau appointed Ms. Monsef as Minister of Democratic Institutions. This lady was a FIRST-TIME member of parliament. She grew up in a NON-DEMOCRATIC Islamic nation. She was 32 years of age at the time of the appointment.

Is this really the BEST CANDIDATE Trudeau could find for the role? The question is absurd in itself. Then, when it became obvious Monsef could not do the job properly, PM Trudeau pulled her from the file, and appointed her Minister of Status Of Women.

Ever heard of something called female genital mutilation? Although reports of this barbaric practice are CONFIRMED to have taken place upon Canadian soil, Ms. Monsef has not said a SINGLE WORD against the practice–in Canada or anywhere else in the world.

What are sensible(non-Liberal) Canadians to make of this? Here we have a politician IN CHARGE of the file to PROTECT Canadian women and girls who REFUSES to lift a finger to prevent the physical mutilation of teenage girls. Good choice, Justin!

It’s all so ABSURD–yet remains firmly in place. Mainstream media do not write about the Monsef strangeness.  Feminist organizations stick their heads in the sand. Our health and medical industry DO NOTHING to prevent the practice.

Not so in other western nations. In Britain, court cases regarding FGM are now common. They should be– studied reveal a show a nearly fivefold increase in reports of alleged FGM to police forces in the UK. Over a three-year period between 2014 and the end of 2016, responses by 47 police forces to freedom of information requests show there were 1,337 reported cases of FGM, and that they had RISEN from 137 in 2014 to 647 in 2016.

Yet there have been a grand total of ZERO cases in Canada–according to Maryam Monsef and boss-man Justin Trudeau. Bollocks. As with myriad social issues under globalist poster boy Justin Trudeau, the Canadian people are being DECEIVED.

The Trudeau government continue to throw major dollars at special interest groups in Canada despite the fact that an element of illegality exists within some of their practices.

If Maryam Monsef really wanted to empower Muslim women and girls, she would STAND UP in Parliament and state that FGM practices WILL NOT BE TOLERATED in Canada.

She will never do it. How do we know? Because like MP Iqra Khalid, founder of M103, she has NEVER publicly criticized any element of Islamic practice PERIOD. End of story.

The Trudeau government have no interest in the health and welfare of Canadian girls. They maintain just a SINGULAR concern--to win the next federal election by ANY MEANS POSSIBLE.

Every move Justin Trudeau makes is an attempt to solidify his position as the “Fidel Castro” of Canada. Political puppets such as Maryam Monsef are nothing more than strategic multicultural weapons to help him achieve this goal.