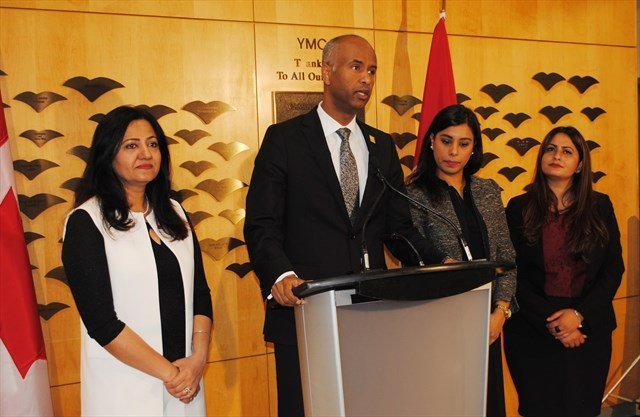 Canadian immigration policy is resulting in an unprecedented–and overlooked– development in Canadian society– a transition of Anglophone Canadians into a minority community.

The number one impact upon this social development comes by way of immigration policy. Yet, based upon media presentation, one would believe the relevance of this social transformation to be one step below the importance of Saturday night’s roster of NHL Hockey games.

CAP will tell you why: Because government and their media slaves do not want Canadians focusing on this element of Canada’s social equation. Pourquoi? Because they want to ensure their choice for immigration minister receives the least amount of public push-back possible.

So who is Trudeau’s leading contender for immigration minister of Canada? Why, it is a Somalian refugee named Ahmed Hussen. Why is this African import the number one choice?

Because Ahmed Hussen has held the federal immigration portfolio for the past three years.

CAP consider this one an entirely odd-ball and sketchy development. After all, what should be expected from an immigration minister is balance, fairness and the pursuit of the best interests of all Canadians in terms of government policy.

Naturally, Trudeau chose the wrong person. If anything, MP Ahmed Hussen has proven himself to be perhaps the most biased, one-sided and hate-filled MP in Canadian history.

CAP Opinion: Selecting this individual as IM is a slap-in-the-face for Anglophone Canadians–the exact reason why Trudeau made this choice in the first place. Furthermore, it seems more than obvious that Mr. Hussen does not like specific segments of society.

These are, in CAP’s opinion, English Canada, Anglophone Canada, as well as Christian Canada. Throughout his tenure, Mr. Hussen has consistently run-down these communities, branding our people racists and bigots whenever we have the “nerve” to question King Justin on his tweet opening the doors to tens of thousands of illegal Third World Refugees.

Ahmed Hussen calls these people “irregular” migrants. Now, George Orwell may be impressed with this piece of propaganda, but rest assured millions of Canadians are not impressed at all.

What else? Seems Hussen has some interesting personal hobbies. One of them is bringing ISIS terrorists back from the Middle East and setting them up with welfare cheques.

So Ahmed Hussen has proven himself to be an anti-Anglophone, pro-militant Islam immigration minister. Please do tell– is this man a person who takes an unbiased approach to Third World immigration to Canada? How about refugee status in Canada?

Why would this be, when Hussen is himself a refugee? Why would this man treat all potential immigrants equally, when he has proven his ubiquitous dedication to fundamentalist Islam?

He doesn’t, and he wouldn’t–therefore, he is a perfect choice for King Justin of Canada. In truth, Trudeau shares the same attitudes as Mr. Hussen. But of course, as our PM claims, he is a “practising Christian.” If true, then Saddam Hussein deserved to be appointed head of the Vatican.

Will Trudeau do the wrong thing, and once again appoint this demographic destroyer as immigration minister. CAP theory states that within the Trudeau government, silence equates with one specific outcome– TROUBLE.

It was this way with the advent of Canada’s trans-sition from European-dominated immigration(yes, in fact there was a time when this was the case) to Third World-dominated migration.

It was this way when Pierre Trudeau personally forced “multiculturalism” upon an unsuspecting Anglophone population, as well as when son Justin unilaterally entrenched the Nation of Islam within the Canadian government.

Silence from government, as well as silence from media. What is the media approach to the pending appointment to Cabinet of the next immigration minister? Total SILENCE.

Bad sign, fellow patriots.  It is our opinion that the selection of immigration minister will speak volumes about Justin Trudeau’s globalist agenda for the future of our nation–the very reason CBC and the rest say nothing.

Yet, despite their worst intentions, the truth shall be revealed by the end of November, 2019. Will the choice be Ahmed Hussen, African-Islamic refugee from Somalia?

CAP go all-in on this one. After all, within the world of Liberal-Globalist destruction, silence is indeed “golden.”