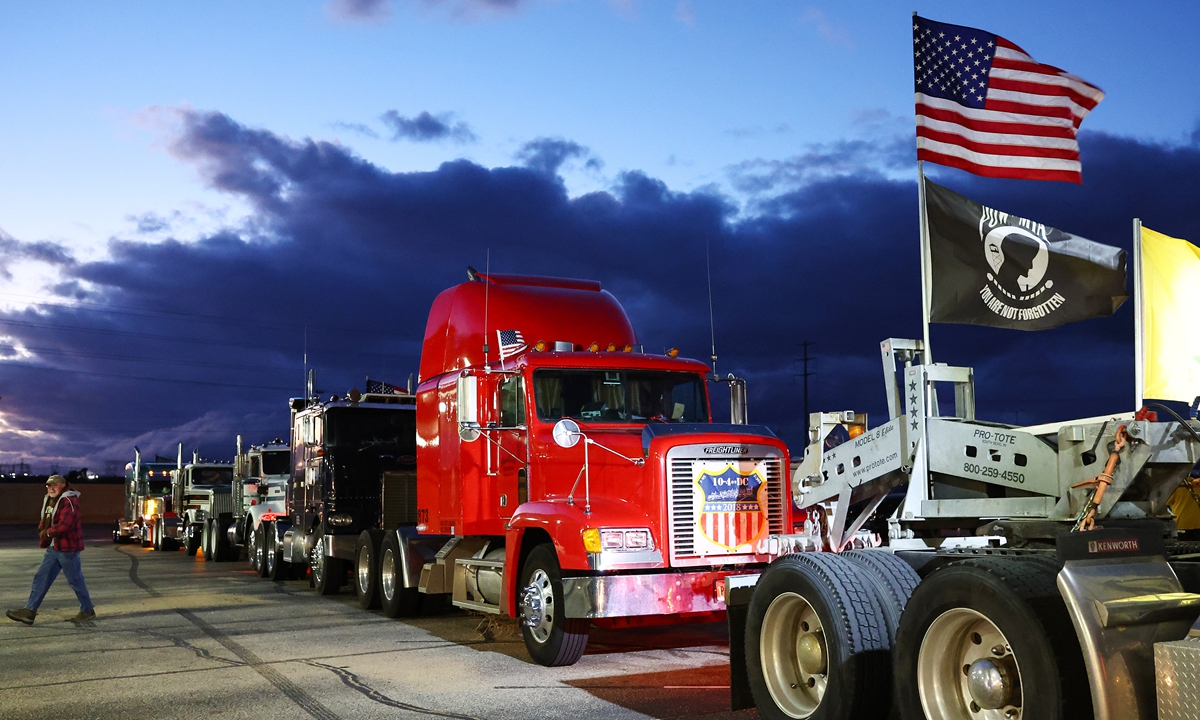 A line of trucks, cars, and recreational vehicles circled Washington DC on the weekend, in anticipation of traffic disruption around the US capital aligned with calls to end pandemic-related restrictions in America.

“From its base at a speedway vehicle racing site in Hagerstown, Maryland, organizers of the “People’s Convoy” of 1,000 vehicles have said they plan to welcome the new work week by driving around Washington on the already notoriously congested Beltway.”

In terms of media coverage, silence has ruled the roost since the convoy to Washington, DC began. We speak not of American media, but rather of the media monolith that exists north of the border in Canada.

What are the reasons for the collective silence? An attempt at logic: Justin Trudeau and his draconian Covid measures have been the primary cause for the Freedom Convoy in Ottawa. The People’s Convoy in Washington is an outgrowth of the Ottawa protest. Therefore, the prime minister of Canada is the individual most responsible for the Washington protest.

No wonder CBC, CTV, Globe & Mail and Toronto Star remain mute. It is fairly stated that PM Trudeau is a cause of social dischord in Canada and the United States. Of course, this idea will never penetrate the consciousness of Canadian society. Why not? Because in the style of socialist nations, the Liberal government of Canada “own” our media.

Think this to be a paranoid smear from conspiracy theorists? Not quite:

An independent media company has released details regarding the relationship between the Liberal government and media organizations in Canada. The names of the news media who took part in a $61 million  pre-election pay-off have been published.

As reported by Canadaland.com, media outlets such as Maclean’s, Postmedia, Black Press and Epoch Times received funds from the Trudeau government as part of a $595 million dollar payout to media in 2020.

Additional insight is revealed when contrasting government approach north and south of the 49th parallel. In response to the Ottawa Freedom Convoy, Justin Trudeau branded the truckers racists, bigots and white supremacists. In doing so, he set the table for a media feast of condemnation of Canada’s working class peoples.

His smear would not stop there. Next, Trudeau ran and hid from Canadians for a week, claiming he had come down with a case of the Covid blues. Timing is everything. After a week of stone-cold silence, suddenly Mr. Trudeau flipped to the opposite extreme. Invoking the never-before utilized Emergencies Act, Canada was transformed into a replica of an authoritarian state.

Police in the streets clamped down on protestors. Participants bank accounts were frozen. Convoy leaders were arrested and placed in jail. After which one protest organizer, Tamara Lich, was brought to her court appearance in shackles. Canadian media delivered not a word of condemnation.

As for Justin Trudeau, he never did end up meeting with protestors. Flying off to Europe to assist with the Ukrainian crisis is all very fine. Dealing with domestic crisis, not so much. Meanwhile in the United States, it took less than a week for U.S. Senators to meet with protest leaders in Washington:

“Leaders from the truckers convoy that has circled the Capital Beltway have plans to meet with U.S. Sens. Ted Cruz and Ron Johnson on Tuesday, while the rest of the group plans to stay on the road through DC, Maryland and northern Virginia.”

“We are making some progress! First meeting with DC scheduled for tomorrow,” the organizers said on the convoy’s official Facebook page. Talks have begun…but we aren’t leaving until our demands are met.”

There is no choosing– let alone discussion– in Justin Trudeau’s Canada. What a difference a border makes. Our PM doesn’t get his hands dirty by sitting down and talking with Canadians who oppose his policies. The “little people” have never been of interest to the Trudeau family. The same applied to father Pierre Trudeau, the only other national leader who has invoked Emergencies Act[War Measures Act] legislation outside of a period of war.

Upon which establishment media offer their rationalization for communist-style crackdown on Canadian truckers: “it’s being done in the name of the preservation of democracy.”

Quite. The outcome being antithetical to the proclamation. Government adherence to democracy has never been as tenuous as it is under the iron-clad control of PM Justin Trudeau. The circumstances are so extreme, one would think Canada is headed for conversion to communism.