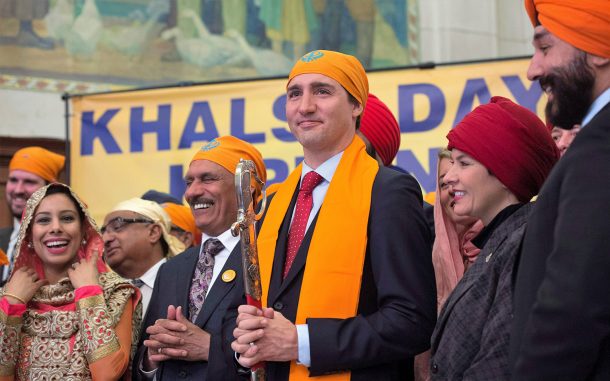 As usual, the secondary impact on Canadians is damaging for local workers, and beneficial for non-Canadians. Isn’t this always the way things roll while Trudeau maintains an iron-grip about society–beginning with our mainstream media.

A big jump in the number of guest workers is hurting low-wage employees and others across Canada, according to economists. The number of non-permanent foreign workers arriving in Canada each year has DOUBLED in the past decade, escalating particularly after the federal Liberal government was elected in 2015.

Even though businesses frequently lobby politicians to allow more guest employees, Green says the latest hikes are putting downward pressure on wages. They’re exacerbating the kind of scenario, he said, that lead to the rise of Donald Trump and Britain’s Brexit movement.

Brexit is, of course, the severing of economic ties with the European Union. In other words, a “break-up” of sorts. This is Justin Trudeau territory. Consider the alienation and financial set-backs for Oil workers in Alberta. So much so their is today a fair amount of serious discussion regarding a “Canexit” of Alberta from our federation.

In other words– a potential break-up of Canada. This is the real Justin Trudeau. As CAP have postulated from day one, we believe Justin Trudeau is a destroyer. His first terms accomplished a great deal is this regard.

Alberta is angry. They resent Quebec, and the inequity of the federal government transfer payment program. Who created the program? None other than Pierre Trudeau. CAP conclusion: the Trudeau family have damaged our nation, fracturing the delicate balance which is Canadian federalism.

Saying it’s “truly dumb” for the federal government to continue boosting low-skilled guest workers in the country, Green emphasized the vast majority of Canadians don’t appear to be aware of the labour-market shift. “It’s TOTALLY  under the radar.”

Now THIS is the Trudeau government. Not only are they driving wages down to levels commensurate with Third World wages, they are also employing China’s media tactics to BURY the entire affair.

Welcome to “no core identity” Canada, where our prime minister pushes our nation away from democracy and freedom of speech, and toward an emulation of social standards in Third World and communist nations.

Then, our globalist “King of Kings” win a second term in office. Our country is getting screwed over by government in so many different ways–economically, ideologically, politically, religiously.

In the face of a 2013 backlash against the increased volume of foreign workers in Canada, former Conservative immigration minister Jason Kenney drastically cut their numbers. But Prime Minister Justin Trudeau has jacked up the totals much higher.

It’s difficult for the public to recognize that guest worker numbers have grown at a much faster pace than more-often discussed immigration levels, which have expanded by 30 per cent since 2015, with about 320,000 now being approved annually.

In other words, it’s a government secret. How typically TRUDEAU. While Canadians work to put food on the table, Trudeau places additional pressure on our citizenship through a Carbon Tax. Then, he pumps up the foreign worker quota numbers for the benefit of  non-Canadians, which then drives down wages for Canadian workers.

Merci, Mr. Prime Minister. Justin Trudeau has never met a Canada he doesn’t hate. Not all of us, of course– just the majority of us. Anglophone and Christian Canada–there’s the door. And even without the door he is getting at us. Abortion is killing off potential home-grown Canadians. It has been doing so FOR DECADES.

Transgenderism also keeps our population down, as more Canadian-born adults and children transition to becoming sterile, and cannot have children. Another win for Justin– Sikhs and Muslims do not go in for sex change the way Anglos and secular Christians do.

In Justin Trudeau’s Canada, being white means being a relic, or at least heading toward obsolescence. For every dying elderly Canuck, Trudeau has a 7-person Third World family waiting to take their place.

For Justin Trudeau, Anglophone Canada is a dinosaur. We all know what happened to those little critters now don’t we?