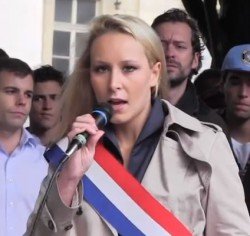 She is the new girl wonder of the French far right, a glamorous 25-year-old poised to break down many mainstream conservatives’ qualms about casting their vote for the Front National.

Since she was elected the youngest MP in French parliamentary history, aged 22 three years ago, while a second year Sorbonne law student, Marion Maréchal-Le Pen, niece of Front President Marine and grand-daughter of its obstreperous founder Jean-Marie, has had the fastest learning curve in French politics since Bonaparte’s.