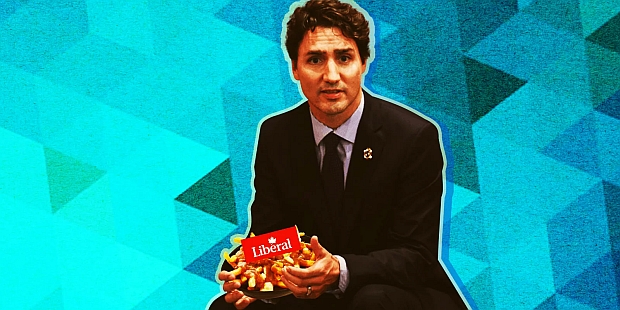 The 2022 Trust Barometer shows that 61% of people polled said that journalists are “purposely trying to mislead people by saying things they know are false or gross exaggerations.” The figure grew by 12% when compared to last year.

As published by True North News, Canadians rank journalists “among the least-trusted professions” according to a new index released by PR firm Edelman Canada.

Around two thirds of Canadians believe journalists, reporters, business leaders, and government are purposely trying to deceive them.  From this we can deduce the impact of six-plus years of a Liberal government control with PM Justin Trudeau at the helm.

Trust in the institutional controllers and influencers of society has reached an all-time low.  Not that mainstream media will allude to this reality. Why would they shoot themselves in the foot? They need the billions of tax dollars being pumped their way by  government in a most desperate fashion.

If media were to drop the cowardice and address the issue head on, what could they possibly say? A collective feeling among citizens is difficult to deny. This is how Canadians feel– and there’s little government and their media partners can to do prevent it. Not that they won’t try. More than likely, they will simply bury the facts and hope that as few voters as possible tune in to “alternative news.”

It should be no surprise that the Trudeau government are presently working to diminish– or ideally eliminate– Conservative news reporting in Canada. Three internet censorship bills are presently tabled to achieve this goal.

This is what a country like China does when enough citizens oppose the will of government– they shut them up. The difference being that communist leaders do not have to go through Parliamentary process to achieve the goal. They just do it–unencumbered and unquestioned. No wonder Justin Trudeau admires China so very much. In fact, so much that he is incrementally working toward an emulation of their communist style of governance.

Many an astute observer of history has proclaimed that democracy is not a given. Its preservation requires constant vigilance:

“Liberty cannot be preserved without a general knowledge among the people, who have a right … and a desire to know.”

“Remember, democracy never lasts long. It soon wastes, exhausts, and murders itself. There never was a democracy yet that did not commit suicide.”

It is one thing for a democracy to organically lose its political bedrock. It’s quite another when the prime minister of a democracy knowingly works to destroy a country’s political foundation.

“For, if liberty and equality, as some persons suppose, are chiefly to be found in a democracy, they will be attained when all persons alike share in the government to the utmost.”

“For, if liberty and equality, as some persons suppose, are chiefly to be found in a democracy, it must be so by every department of government being alike open to all; but as the people are in the majority, and what they vote is law, it follows that such a state is a democracy.”

Under Trudeau and the Liberals, all persons share in absolutely nothing related to government decision-making. Since the advent of Covid, what people vote for is no longer the law.

“One of the keys to the survival of free institutions is the relationship between private and public life, the way citizens do, or do not, participate in the public sphere.”

At which point Cultural Action Party cough into our Tim Horton’s coffee cups. How far Canada has strayed from a condition of authentic democracy. One would think someone might point out the transformation. A few have– Dr. Jordan Peterson being an example. When they do, they are trampled by media horses designating such people quacks and conspiracy theorists.

Truth no longer matters. Power is the number one concern, and there is no Canadian politician more power hungry than Justin Trudeau.

“Other groups Canadians felt were trying to mislead them include business leaders (60%) and the government (58%). 71% of Canadians said that they were concerned with fake news being used as a weapon.”

Here we witness a standard within government-media’s assault on freedom: “accuse the other of what you indulge in.”  This never stops among Liberal propagandists. In this particular example, government and the press accuse purveyors of alternate theory as promoters of “fake news.”

Meanwhile, a majority of Canadians believe government-media perpetuate fake news. Their teamwork is critical. The Liberal-Media partnership share specific goals. Both want freedom of speech on the internet to disappear. For government, this will drive dissenters  to believe Liberal Party lies. For media, it will increase market share as the internet narrows in diversity of opinion.

With their goals aligned, PM Trudeau has transferred government and media relations to those found in China, Cuba and other authoritarian societies. Why should Canadians be surprised? These are the nations that Justin Trudeau, as well as Pierre Trudeau before him, most admire.

“Rebuilding trust is the key to societal stability,” says the Edelman Canada report.

This and a toonie will get you a nice cup of hot tea. It’s not going to happen. Social stability is in no way a goal of government. Rather, their desire is social division, as perpetrated each day by the political partnership of the Trudeau government and legacy media.