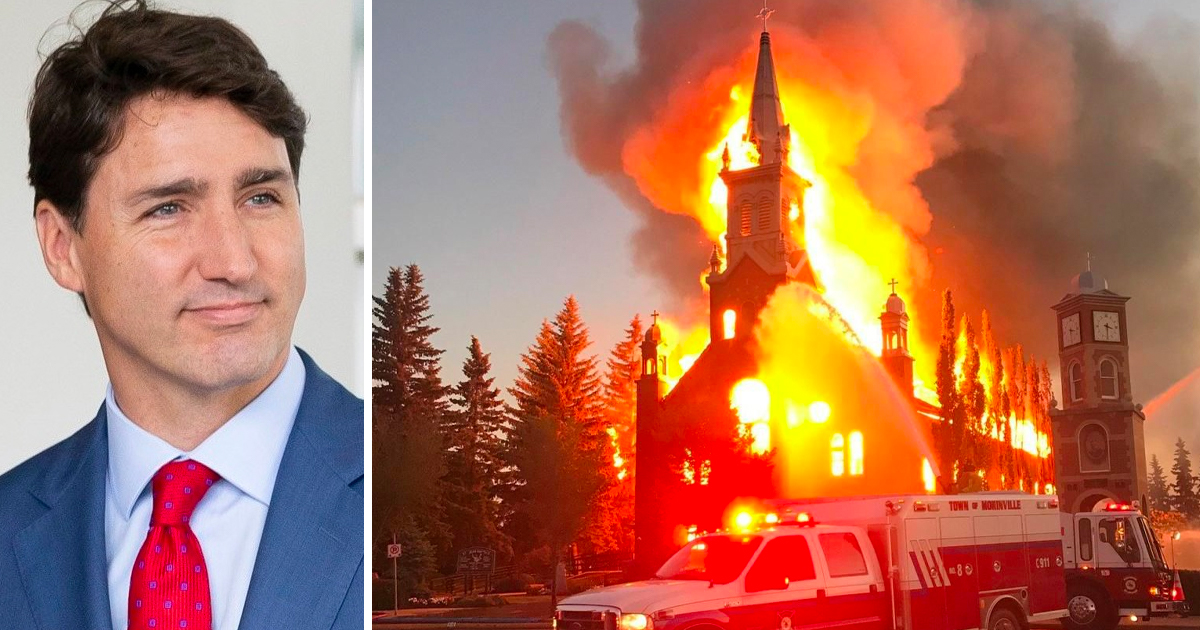 “Leading academics are predicting Britain will see the continuing decline of Christianity, the resurgence of fundamentalism, the rise of non-religion, the emergence of British Islam.”

In regards to the Islamic population in the U.K., a steady rise in the number of those identifying as Muslim went from 3 per cent in 2001 to 5 per cent in 2011, and is expected to increase to 8 per cent in 2023.

Translation: In Britain, as in Canada, Islam is in serious growth mode, while the Christian faith is in steady decline. Perhaps now interested parties will understand why PM Justin Trudeau spends so much time pandering to special interests communities.

Witness as mainstream media take the edge off the findings: it is not “some religions”– it is Christianity specifically.

According to Statistics Canada, citizens who report non-Christian religious affiliation may double by 2036. An article from Western Standard News tells us that the population of Muslim-Canadians has tripled over the past 15 years.

Conclusion: the same religious dynamics exist in both Britain and Canada.

According to Professor Woodhead, “there had been a failure of liberal Christianity[in Britain] to provide an intellectual theology, credible answers on matters of belief.”

In Canada, the situation is exacerbated by a thus-far unrecognized element in the equation: PM Trudeau and his Liberal government are all for it. CAP note the incongruous approach to faith according to our federal government.

It would be one thing if the Trudeau government was simply indifferent to Christianity. The Covid pandemic proves this to be false. While police raided Christian churches, issued fines and placed Pastors in jail, equivalent measures for non-Christian faiths were non-existent.

We begin to understand why Trudeau prefers Muslims and Sikhs above “Old Stock” Canadians. The future of our country is non-Christian. Rather than attempt to preserve Christian presence– or god forbid promote it– our prime minister targets these communities with punitive measures:

“In an unusually harsh judicial slapdown of the Trudeau government, a federal judge ruled that an Ontario university was barred access to the Canada Summer Jobs Program for little reason other than the fact that it was a Christian institution.”

There it is– a perfect microcosm for the religious condition in our country. For Justin Trudeau, it is not faith, God, spirituality, morality or any other ethical element which drives his behaviour.

No– the PM’s motive is the ballot box in federal elections. Talk about an insincere politician. For the past seven years, Trudeau has dedicated himself to a subset of fundamentalist religion: “Islamophobia.”

Turning the good book to Christian liturgy, we uncover the following:

“Hate attacks against Canadian Catholics escalated far faster last year than toward any other religious or racial group. But politicians have been strangely silent.” says Douglas Todd in the Vancouver Sun.

Let’s get this straight. PM Justin Trudeau claims to be a “practicing Catholic.” In 2022, attacks on Catholics is our country’s fastest-growing form of religious bigotry. Justin Trudeau and the Liberals have not a single word to say about it.

Subsequent to the torching of dozens of Canadian churches in early 2022, the PM had the following to say:

The burning of Christian places of worship “is fully understandable given the shameful history we are all coming to recognize.”

Now, let us turn our prayer books to the pages of the Koran.

In 2018, Mr. Trudeau made the following statement during his keynote speech at the Reviving the Islamic Spirit conference in Toronto:

“Canadian Prime Minister Justin Trudeau commended the Muslim community for its contributions to Canada and reiterated his commitment to combat Islamophobia and politics of hate and division.”

What to think, fellow patriots? Is the writing on the wall, or is it not? While it may appear in the minds of a sliver of our society, legacy media in Canada are ensuring the general population understand nothing about our country’s religious transition.

Typical Trudeau it is. Having bought-off establishment media in Canada, the Liberals maintain the privilege of communist China style media manipulation.

Back in Britain, another trend is brewing– the “fire sale of the cultural property”– namely, the sale of Christian churches and their conversion to Islamic mosques.

A Canadian charity that works to save heritage buildings estimates that 9,000 religious spaces in Canada will be lost in the next decade, roughly one-third of all faith-owned buildings in the country.

Enough. The die are cast. Are Canadians looking at a future in which Islam and Christianity swap places within society?

Likely it is. Unlikely that Canadians will hear about this from CBC, Toronto Star, or the Globe and Mail. Certainly our universities–jam packed with “visiting professors” from China and the Middle East— will not object to this cultural transformation.

Is Canada an anti-Christian nation under the iron-clad control of Justin Trudeau’s “minority” Liberal government?

Professor Woodhead identified an area of “strong growth” over the coming decades. it comes in the form of British Islam “finding its place.”

“There are centres of Islamic studies in many universities, with moves to study metaphysics and theology, and not just Islamic law.

“It’s about becoming the most vital part of religion in this country. That’s a very frightening prospect to a lot of people who don’t know about Islam.”

The future of Canada will barely deviate from the developments in Britain. Considering media content, the public will be hearing about this at the same time they inform citizens that within three decades, white Canadians are to transfer to a minority community.

In the meantime, Justin Trudeau does all he can to diminish and degrade Christianity in Canada. This, coupled with a fervent dedication to our nation’s rapidly growing 3rd World religious communities.

“My thesis is that about one in five, about 20 per cent of people, in any generation, in any era in any society other than where there is religious repression, are devoutly interested engaged in religion,” says Prof. Woodhead.

Justin Trudeau is interested in religion too. An eradication of his personal faith and replacement with 3rd World religion being the answer to his political prayers.

3 thoughts on “Like Canada, Christianity In Britain Is Dying While Islam Thrives”