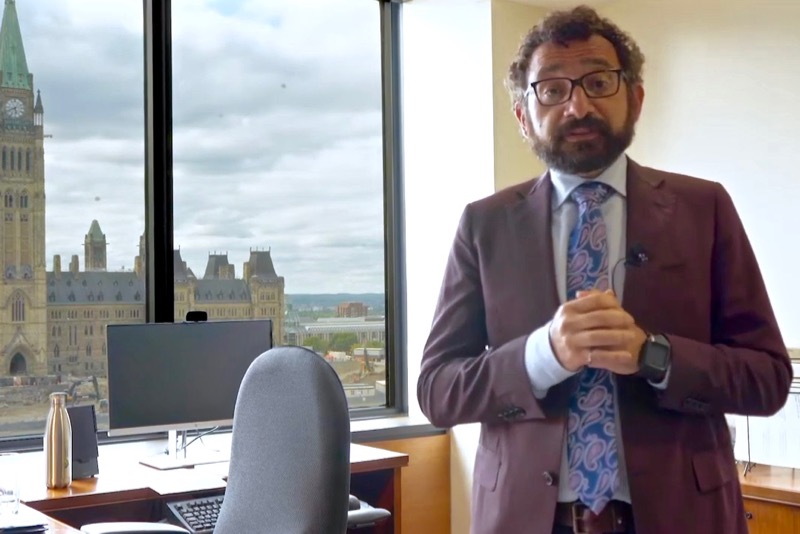 Liberal Transportation Minister Omar Alghabra is living the high life. Appointed to the Liberal Cabinet by PM Justin Trudeau in January, 2021, Syrian half-citizen Alghabra has scaled the heights of political accomplishment in Canada.

Four-time winner of his riding in Mississauga Centre, Alghabra was President of the Canadian Arab Federation from 2004-2005. The reasons why this Liberal MP has advanced within the ranks of the Liberal Party has never been explained.

Based on research, the political career of the former donut salesman kicked into high gear upon arranging a nation-wide tour of Canadian mosques for Justin Trudeau in 2014. The PM candidate wished to gain the inside track on capturing the rapidly growing Muslim-Canadian vote. He hasn’t stopped since.

“Federal COVID-19 restrictions at the border are being extended until at least June 30, 2022 Health Canada and the Public Health Agency of Canada announced this week.”

The announcement arrived a day after a Conservative Party motion calling on the federal government to lift all remaining COVID-19 travel restrictions was the defeated in the House of Commons.

As in, unanimously defeated by Liberal, NDP and Bloc Quebecois MPs. Like “nay” voter  Omar Alghabra, 99% of MP voted to keep unvaxxed Canadians locked into our country. To provide context, readers should be aware that Canada is an outlier in this regard.

No other western democracy–  in fact very few countries in the world(China being an exception)– are maintaining Covid lockdowns:

“COVID-19 Restrictions Are Lifting, But Unvaccinated Canadians Still Can’t Board Planes Or Trains”

“Some unvaccinated Canadians question why federal government still maintains mandate,” stated CBC News. Yes, we are wondering. For what reason would Canada diverge from policy maintained by all other western nations?

Understanding that the CBC wouldn’t dare respond to the question, CAP take a stab at it. The reason is because Canada is different than any other western nation. Our thought is that PM Trudeau has served up our country as a prototype for western post-democratic governance. To accomplish the goal, he brought in yes-men like Omar Alghabra to lead the charge.

Alghabra knows all about non-demographic societies. He is, at this moment, a citizen of one of them: Syria. Or perhaps Saudi Arabia. Like ex-Liberal Cabinet member Maryam Monsef, no one seems knows for sure. Not that it makes a difference. Turns out Omar Alghabra is the definition of post-modern Canada:

“Some of the images and the voices that we heard come out of that protest were alarming. Canadians saw for themselves. We had swastika flags, we had the Confederate flag, we had voices that called for the overthrow of the government.”

No wonder the GTA MP is in Justin Trudeau’s good books– he replicates the PM’s  personal attitude. Anyone who diverges from official government positioning is a racist and/or white supremacist.

Sounds like a trap, no? Come to think of it, so does being locked inside your own country– a violation of Canada’s Charter of Rights and Freedoms. Degree to which any of it makes a difference? Nothing at all. What can a concerned Canadian learn from this?

Number one on the list is what legacy media will never tell you: Canada is being  transitioned from a democratic nation to a pseudo-communist society.

Sure, Justin Trudeau stated that he admires China. He did not state that his plan is to convert Canada into a mini-replica of the behemoth nation. To accomplish his goal, Mr. Trudeau has assembled a crack team.

Marco Mendicino, Pablo Rodriguez, Ahmed Hussen, Omar Alghabra, Patty Hadju, Sean Fraser: all primed at the pump for our transition to authoritarian governance. Looking at the faces of these people as they stand behind Trudeau offers insight.

Behind their Covid masks–  unnecessary as they are– these people share a look of trepidation as Trudeau announces an extension of citizen lockdown. “Are they really going to buy this?” is the vibe. Appearing guilt-ridden, Team Trudeau continue to push incremental loss of personal freedoms in Canada.

Did Justin Trudeau realize the position he was carving out when selecting Omar Alghabra as Transportation Minister? Hard to know. It’s something akin to, let’s say, choosing Dr. Theresa Tam as Chief Medical Officer in advance of the Covid pandemic.

Then again, Justin Trudeau’s decision-making is forever infused with a pre-meditated aura. The man knows something that the people of Canada do not.

In 2009, then-Citizenship and Immigration minister Jason Kenney cut $1 million dollars in annual funding to the Canadian Arab Federation, arguing that the group’s leadership had repeatedly expressed support for Hamas and Hezbollah.

Omar Alghabra, Liberal candidate for Mississauga Centre and former President of CAF , stated that “it’s government’s prerogative to make decisions on what to fund and what not to fund.”

Though Jason Kenney noted that Alghabra had not been at the helm of the CAF at the time, he stated that Mr. Alghabra had “criticized my decision to defund CAF.”

After which PM Justin Trudeau elevated Alghabra to the highest political position in the land. Now the bad news: this is Canada. The day Justin Trudeau became PM is the day that our nation  transformed into a country no Canadian asked for, voted for, or approved.