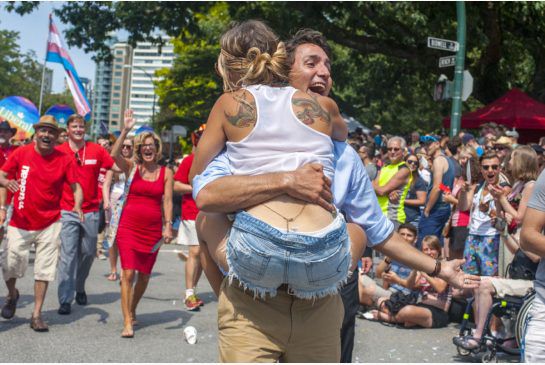 While it has been a constant that all ruling governments establish priorities for legislative changes, there is something wholly unique about this within present-day Canadian society.

The fact is, Justin Trudeau and the Liberals give priority to some awfully strange social issues. In fact, astute observers can go as far as to say there is a certain “fixation” regarding the ruling Liberals, and issues of a sexual nature.

In November, 2016–barely four months after the Liberal seized control of society, Trudeau & Co. gave priority to the following:

Interesting to note that not a single mainstream media article suggested Trudeau “go stuff it” as far as this peripheral issue goes. Indeed, issues of LGBT and transgenderism were front-and-centre for the Liberals during their first term in office.

Obviously, government’s ernest nature has yet to subside. The Liberals have tabled Bill C-16,  intended to impede any Canadian citizen from interfering with Canadians under age 18 in taking steps to transition to the opposite sex.

320.‍103 (1) Everyone who knowingly causes a person who is under the age of 18 years to undergo conversion therapy is:
(a) guilty of an indictable offence and liable to imprisonment for a term of not more than five years.
The punitive measures are harsh–up to five years in prison for convicted offenders. In street terms, what this means is that if a parent interferes in their child’s intent upon gender transformation, they may find themselves behind bars for up to 5 years.

Not too extreme, eh? Cultural Action Party has a question we will guarantee no establishment media outlet will posit:

Why is gender transformation for Canadians of any age so damn important to the Trudeau government? What is it about this social issue that brings it to top priority level for Canada’s “post-modern”government?

CAP Response: we do not know. Therefore, we can only guess. As with the larger, big picture aspects of the LGBT movement, the answer must lie in the political. It is here that CAP once again move into paranoid mode.

Until Covid ostensibly smothered all secondary social movements, LGBT was looming large in society. From 2015-2019, Justin Trudeau was all over it, prancing around in every Pride parade he could locate.

What was the impetus? LGBT is a well-funded movement. The funding has to come from somewhere. CAP will guess it comes from billionaire globalist George Soros, and his non-profit behemoth “Open Society Foundation.”  This organization is perhaps the world’s greatest advocate– other than the United Nations— for “open border” societies.

Not within communist or theocratic nations,of course. This “blessing” is pronounced exclusively within western democracies. The same dynamic applies to another George Soros-inspired initiative–mass abortion.

From 2015-2019, and no doubt occurring covertly in 2020, Justin Trudeau pushed every aspect of these ideological globalist sentiments. Transgenderism in one of them.

Moving away from a “macro” societal perspective, consider this scenario:

Johnny Student in Orilla, Ontario comes home from high school one day, and informs his parents that after a fair bit of thought, he wishes to transition his gender. Said parents are not impressed. They do not want this. However, their child is adamant, and refuses to budge.

Mom and Dad then check into the legal angle on this, only to find that if they interfere in a sustained manner , it is possible they could spend five years in prison.

What should Canadian patriots make of this piece of social surrealism? CAP will go first– with each passing day, our nation appears to be morphing into a pseudo-totalitarian society. Within such a nation, media act on behalf of government. Or at the very least, they do not “pick holes” in government policy.

Fact is, CBC and corporate media are towing this exact line– never more so than when it comes to sexual-oriented issues.

Irony of ironies– wasn’t it the father of our current PM— former Liberal Prime Minister Pierre Trudeau–who stated that “government should stay out of the bedrooms of Canadian citizens?”

Turns out that “sonny-boy” is doing the exact opposite, while media bury this little from our knowledge.