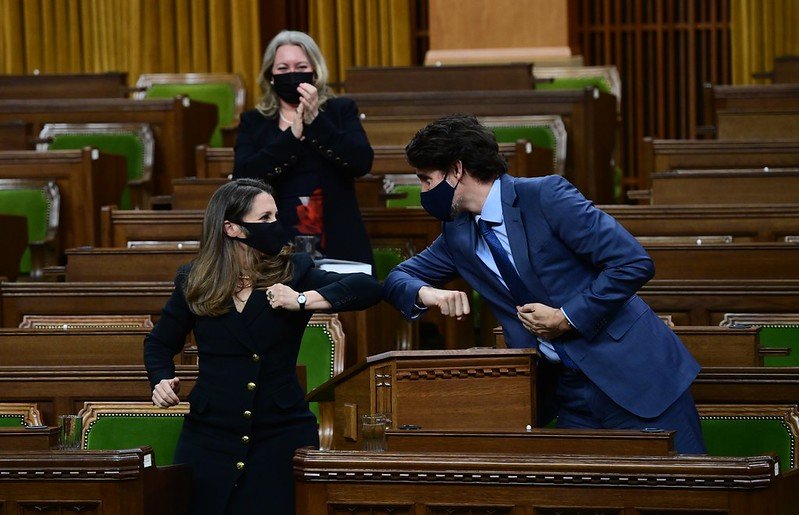 Leave it to Prime Minister Justin Trudeau to have his government running around in post-modern circles. According to Bloomberg News, Canadian banks “have frozen $7.8 million dollars in over 200 accounts under emergency powers meant to end protests in Ottawa.”

For common sense Canadians, at least one issue nags at the heart– the Truckers Convoy is over. Protestors have been cleared away. The truckers have driven off into the sunset. Subsequent to this, the House of Commons approved Justin Trudeau’s invocation of the Emergencies Act. The fact that no actual emergency existed at the time of passing was a moot point. Reasons provided included the premise that “it might happen again.”

Many things in life might happen. For example, an asteroid might be heading toward Toronto, Canada. Would government then set-up night watchmen with flashlights to stare into the sky ad infinitum?

Part of the purpose for the EMA is to freeze personal bank accounts of Canadians involved in the protests. According to Deputy Prime Minister Chrystia Freeland, being “involved” means donating any dollar amount to the Truckers Convoy. Although positioned by media as a “joint venture,” government has compelled Canadian banks to follow their orders.

Isabelle Jacques, assistant deputy minister at the finance department, said it’s “possible although very unlikely” that small donors to the convoy have seen their accounts frozen.

Now, banks have informed the Liberals that they have started to unfreeze the funds. Madame Jacques stated that “financial institutions are responsible for conducting their own reviews based on information from police.”

Reading between the lines, we discover what detractors pinned on the Liberals all along: government overreach. Financial institutions do not want Trudeau’s cabal sticking their woke noses into their business. It has been done regardless.

The three ring circus that is Justin Trudeau’s political power-grab reaches a pinnacle upon learning that the upper chamber– the Canadian Senate– is at this moment debating the Emergencies Act.

For the EMA to pass into law, it must have Senate approval. The truckers have gone home. No emergency exists. After which the Emergencies Act passes in the House. Nearly $8 Million dollars has been seized from working class Canadians who have  committed no crime. Then banks reverse the measure. As they do so, the Senators are debating  passage of the EMA into law.

Now comes the bad news: this is Canada. It is Justin Trudeau, and his Liberal government. Under such surreal conditions, how can any thinking Canadian fail to arrive at the following conclusion:

There is something which resides beyond the Act itself that serves as motivation for government behaviour. We speak of subterfuge– placing an ostensible objective as a priority goal, when the true priority is a secondary outcome.

This is also Justin Trudeau and the Liberals. For over six-years, his Cabinet has specialized in the art of subterfuge. So what is the ultimate purpose in this case?

It is control. First Mr. Trudeau leverages the Covid pandemic to crackdown on individual freedoms. Next, he raises the threshold with the Emergencies Act. The goal being control of our citizenship in emulation of the authoritarian societies our PM most admires

Whether or not Justin Trudeau’s authoritarian house of cards will come crashing down remains to be seen.