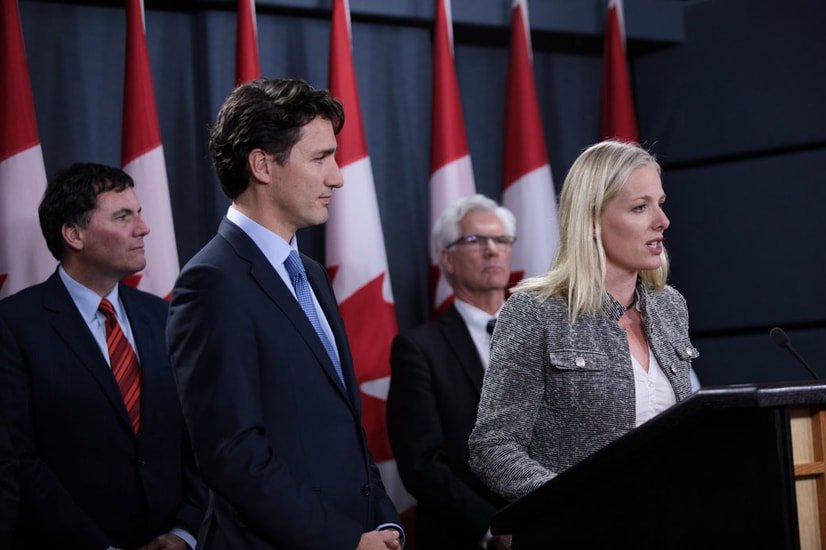 Sign of the times, mess with your minds. “Ottawa Centre’s Liberal candidate, Catherine McKenna, Minister of Environment and Climate Change,has launched her final campaign week with a non-traditional series of single-issue lawn signs.”

Love that media spin. What has truly transpired is that Ms. Gung Ho for Justin Trudeau has removed all traces of his name and brand from her re-election Liberal campaign signs.

Establishment media have a spinning top for this one: it is “non-traditional” campaigning. How typical is this? By placing an Orwellian spin on the situation, the editors of the Ottawa Citizen think they can fool the people of Canada.

Let CAP offer commentary: The fact that a Liberal cabinet member–along with dozens of Liberal back-benchers–are removing all traces of Trudeau from their marketing campaigns speaks volumes--meaning media will only speak a little, and when they do, they drop the true magnitude of the scenario.

What McKenna has done is not a typical political move. It is entirely atypical, and should be expressed in this light. It won’t be, because establishment media controllers in Canada will not permit it. How “socialist” is this? Quick answer: very much so.

“Missing from the signs is any mention of leader Justin Trudeau or the Liberal name, though they carry the party logo with the letter L and a maple leaf. And they are not in traditional Liberal red.”

See how Ottawa Citizen roll? Always taking the edge off Liberal-Trudeau political weirdness. What a sham this is.

So dozens of Liberal MP’s, including at least one Liberal Cabinet Minister, have ended the political tradition of supporting the ruling PM on their campaign signs, and presumably, other forms of marketing such as online advertising.

Talk about a complete lack of confidence in their party leader, and current prime minister of Canada. This, in fact, is what an astute article headline would convey to the people of Canada. Ottawa Citizen do no such thing.

Incredibly, polls are still telling us the Liberals and Conservatives are “neck and neck.” More media spin? More than likely, yes. For CAP, it is just about unfathomable that at this point in the game that any mentally-stable Old Stock Canadian would vote for this political charlatan.

Yet, they will. How sad is this? Very, very sad. Pourquoi? Because in CAP’s opinion, a vote for King Justin is a vote for the decimation of English Canada, and its peoples.

Self-destruction, anyone? Yes–because since they year Papa Pierre Trudeau became PM in 1968, Anglophone Canada has been on a one-way trajectory straight down the drain toward our eventual demise.

Or, perhaps they can, and they are simply restricted from alluding to these concepts by the media controllers above them. As is commonly understood, those above them are also Anglophone and Francophone Canadians in the main.

So…why do these people refrain from supporting their own kind?  Nearly all of Canada’s top journalists are Old Stock Canadians. Why then are they on-board with the decimation of their own people? Provocative stuff, to say the least.

At this point, both Catherine McKenna and boss-man Justin are flabbergasted that climate change issues are not a top prioirity for Canadians. How shallow this is?

Canadians are presently being taxed to death. Justin Trudeau and boyfriend Bill Morneau have sniffed out every tax dollar they can find like a bloodhound on the trial of a killer on the run. They have even  gone so far as to place a “tax on a tax”— GST-style. Trudeau has made things even worse with  a giant carbon tax implementation.

This situation is no isolated incident–this is the very heart and soul of Justin Trudeau, advisor Gerald Butts, and butcher-boy MP Ahmed Hussen. It is the essence of Liberal-Trudeau-Globalist methodologies.

Simply put, Catherine McKenna is a globalist puppet. Makes good sense, because so is her globalist boss-man. If she could, McKenna would sell a carbon tax to a gang of moose in Northern Manitoba–she is as zombie-like as King Trudeau in this regard.

CAP Theory: Carbon Tax is globalism. So is the political element of LGBT movement–transgenderism in particular. Other elements include advancing geo-political Islam, and well as advancing the democracy-destroying agenda of the United Nations. A final major component is debt and deficit–meaning financial enslavement to international banking.

Trudeau and his government follow this agenda 100%. Catherine McKenna is one of them. So are cabinet members  BIll Morneau, Ahmed Hussen, Ralph Goodale, and the rest.

Could this unprecedented event occur on voting day– Liberal MP’s are completely embarrassed by PM Trudeau, and delete all traces of him–including the infamous Liberal “red” from their campaigns, and Trudeau goes on to win the election?

CAP cannot rule this out. It would be entirely absurd, yet Justin Trudeau and his cultural assassins are an absurdity. Our nation has indeed been trans-formed by Justin Trudeau–from sound liberal democracy to absurdist pseudo-democracy rooted in the Trudeau Dynasty’s preferred form of governance–communism.