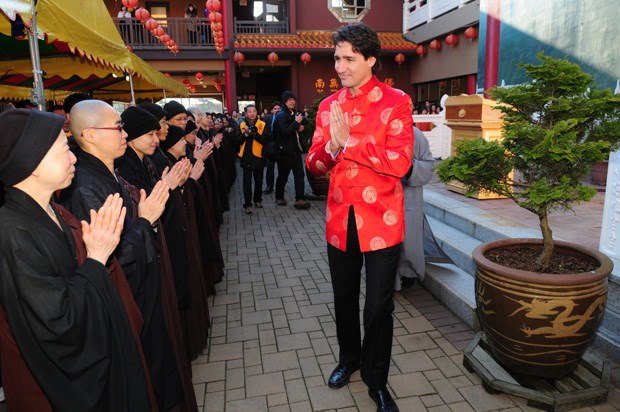 ‘No Downtown Christmas Tree? Shameful’ reads a recent letter to the editor in the Edmonton Journal.

“I have never in my 80 years been so disappointed as I was today, hearing that there will be no decorated Christmas tree by City Hall. Instead, the council without any input from Edmonton residents, has decided to decorate with a buffalo on skates, et cetera.”

“This letter is to remind them, that tree out there is a symbol of the Christmas season we have all grown up with, as well as our children and grandchildren.”

And that’s why these cancellations occur. No one could ever accuse CAP of seeing Canada through rainbow-coloured glasses. Yes, we leap to the “conspiratorial,” often with lighting speed.

And yet, the thematic nature of Christmas-oriented cancellations sticks in our craw. Here’s another:

There will not be a Christmas lights switch-on event in Halifax this year – but the town is getting new lights and other festive events.

Joy To The World. Perhaps Christmas will end up being replaced with Somalian History Month, or some darn thing. It’s way of the Canadian world since PM Justin Trudeau seized power in 2015.

Step-by-step, incrementally, traditional Canada– inclusive of the Christian faith– is being subsumed in the name of woke “diversity.” Readers will know how we feel about this:

Multiculturalism is, in essence, a program to transition power away from Old Stock Canadians, and deliver it into the hands of Trudeau’s preferred citizens from the 3rd World, Asia and Middle East.

Christmas, of course, is a fundamental of historical Canada. Therefore, it has to go.

“Chairman Mao Tse Tung’s  concerns about those not sharing his vision of communism were outlined in a Chinese Communist Party Central Committee document issued on May 16, 1966; this is considered by many historians to mark the beginning of China’s Cultural Revolution.”

“Mao shut down China’s schools, and during the following months he encouraged Red Guards to attack all traditional values.”

We begin to gain insight into a social dynamic that CBC and corporate Canadian media refuse to consider: Trudeau and the Liberals, along with provincial governments and municipalities, are chipping away at the bedrock of Christian Canada.

A number of monuments and memorials in Canada were removed as a result of protests between 2020 and 2022. These included six sculptures of Sir John A. Macdonald, the first prime minister of Canada, three of other figures connected to the Canadian Indian Residential School System (Alexander Wood, Egerton Ryerson and Joseph Hugonard), two of British monarchs (Queen Victoria and Elizabeth II), one of the British explorer Captain James Cook, and a number of others.

Is Canada experiencing a communist-inspired tear down of our national heritage? CAP go all-in on the idea. It’s latest incarnation being a systemic decimation of Christianity’s premier holiday.

“This year, the mall will not be putting up a Christmas tree to kick off the holiday spirit due to a roof construction project. In previous years, the Eaton Centre has brought in a 108-foot-tall Christmas tree for the holidays and hosted a lighting ceremony.”

As long as Justin Trudeau remains prime minister, and the Liberals retain power, our country is going to continue along this social trajectory.

CAP often rant on about Mr. Trudeau’s “post-modern society” proclamation. That his vision includes a decimation of the Christian faith in Canada is lost on a majority of citizens.

It’s part of the what we call Trudeau’s “New Canadian Order.” Away from media obfuscation, astute citizens recognize the fundamental transition.

Federal governments of the past worked for the “people.” Not in all ways, of course. No one should believe that historical governments always behaved in an altruistic manner toward its citizens. Yet, in terms of decision-making, government took the will of the public into account in many cases.

Say no-go to this one. Justin Trudeau does not work for the Canadian majority. So obvious it is that his mandate comes from “on high.” World Economic Forum, World Health Organization, United Nations, China, Saudi Arabia, Iran.

PM Trudeau is functioning as a puppet figure for global power-players. He does what they tell him to do: Climate change, LGBT, Immigration, Carbon Taxation, Transgenderism, Abortion, Euthanasia. China, Saudi Arabia and Iran are exempt from a war on their traditional values.

Why is it that these diversions only apply within western democracies?

Note the thematic element. While WEF may not direct government policy on economics(actually, they do), it is the social element of their policies that alarms Cultural Action Party.

How plainly can one state it? Justin Trudeau has transitioned Canada to a form of slave-nation. Our sovereignty is being eroding on a daily basis. All elements of World Economic Forum’s social agenda are being carried out in full.

In Canada, Christmas is under attack. The holiday is illegal in China. So too the Christian faith as a whole. Is Canada next?

In 2022, Justin Trudeau’s admiration for China is well-known. If not for mainstream media, Canadians would by now understand the hidden element: