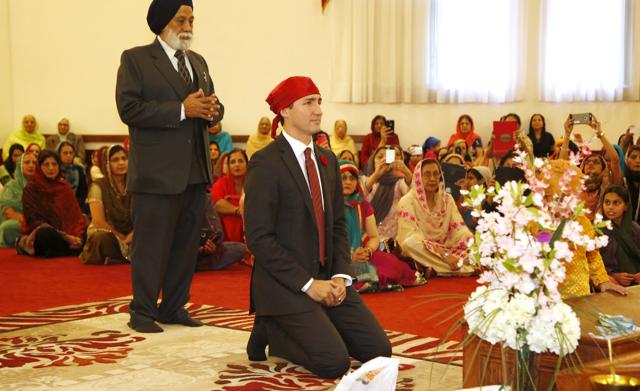 Unless a person inspects globalist politics in Canada with a fine-tooth comb, it is doubtful they would be aware of a most fascinating fact:

Eighteen Sikh MPs were elected to Canada’s 338-seat House of Commons in the October, 2019 federal election. Meanwhile, the equivalent legislative body in India — the 543-seat Lok Sabha — only has 13 Sikhs members.

What an incredible statistical report. Population studies place the number of Sikhs in India at 20.8 Million.

In Canada, the Sikh population is reported to be 500,000 citizens. And yet Canada has more Sikh MP’s than India.

What is it about a community which comprise a mere 1.4% of Canada’s demographic make-up that has established such an extreme over-representation within our federal government?

Naturally, there are a number of key factors. As a base level, we have our policy of multiculturalism. As forced upon society by founder Pierre Trudeau, “diversity” in Canada instructs our 3rd World communities to advance and promote their ethnic identity within our pluralist society. In addition, the policy transfers tens of millions of tax-payer dollars to them for this purpose.

Beyond the high level, an answer comes in the form of community political organization. It is here that Sikh Canada excel in no uncertain terms.

According to political media outlet The Print, “Sikhs[in Canada] have strong internal unity based on the caste. Sikhs are known to have a tight community structure, which places them at an advantage.”

“Sikhs are the dominant ethnic group in eight federal seats and have a substantial presence in 15 other seats important enough to tilt the balance in favour of a party,” professor Shinder Purewal of Canada’s Kwantlen Polytechnic University told ThePrint.

What The Print omit is that every seat they speak of is found in one of two locations–urban Toronto, and urban Vancouver.

“These networks are very sophisticated and layered, and have been organically developed and refined in the Sikh community over decades in a way few others can easily mimic.”

As an example, let CAP refer to the riding of Brampton Ontario. For one thing, Brampton is a “white minority” riding. The constituency has a total of five ridings. Here are the results from the 2019 federal election:

Once again, a fascination revelation. A few thoughts on this example of “mono-culturalism”:

Let us first consider the degree of mainstream media focus on what is herein exposed. It’s a pretty simple story–there is none. Why not? Is this element of contemporary politics not a pertinent issue within there sphere of Canadian politics, as well as society in general?

Why then do the CBC, Globe & Mail and the rest choose to hide this from public knowledge? Could it be because our ruling government want it this way?

CAP can easily understand why Prime Minister Justin Trudeau is in favour of such as thing. The entire phenomenon is a straight-up consolidation of Liberal-3rd World political power.

“From a young age, Sikhs are encouraged to volunteer in campaigns and learn not only how to fight elections but how government works in general,” said Sandhu.

My, my–this is indeed rich. Can anything close to this be said of Old Stock Canadian communities? To do so would be the absurdity of the century.

Old Stock Canadians do not take pride in community building–for a good reason. Whenever we try, we are branded racist for doing so by government and media.

How about grassroots empowerment? Not a chance. Since the day Justin Trudeau put on his Canadian crown in 2015, our Anglophone communities have been branded racist and bigoted by government and media. What was racism” in 2014 has been put on steroids– it is in 2021 “systemic racism.”

If one didn’t know better, one could conclude that government and media do not like Old Stock Canada. Beyond this, how would community identity, organization and pride manifest among Anglophones in a manner similar to our Sikh community?

Simple as Nova Scotia apple pie– it wouldn’t. Could this be the reason for the one-two punch in the gut from government and media?

BURIED BY MEDIA: Why Trudeau Is Making Old Stock Canadians Pay For The “Sins Of Their Fathers”

Is this part of a pre-meditated plan to undermine, weaken and disempower Old Stock Canadians? Is Justin Trudeau knowingly and intentionally promoting this agenda?

Why on earth would such a thing occur? Furthermore, if this be the case, why would Canadian media obfuscate a malevolent agenda directed at the majority of our population?

Many questions–no answers. For this reason, interested parties can only speculate. Here is Cultural Action Party of Canada’s speculation:

PM Justin Trudeau is not “leading” our country so much as he is transforming our country. The community that would most resist the transformation is Old Stock Canada. Therefore, punitive measures are manifest in government policy and media content.

Ours is changing nation indeed. CAP expect our society to function as a legitimate democracy for perhaps two more decades. After which, governance in Canada will transform into a pseudo-dictatorship.

Based upon treatment of Old Stock Canadians under the iron-clad rule of Justin Trudeau, one can only predict further deterioration in the coming decades.