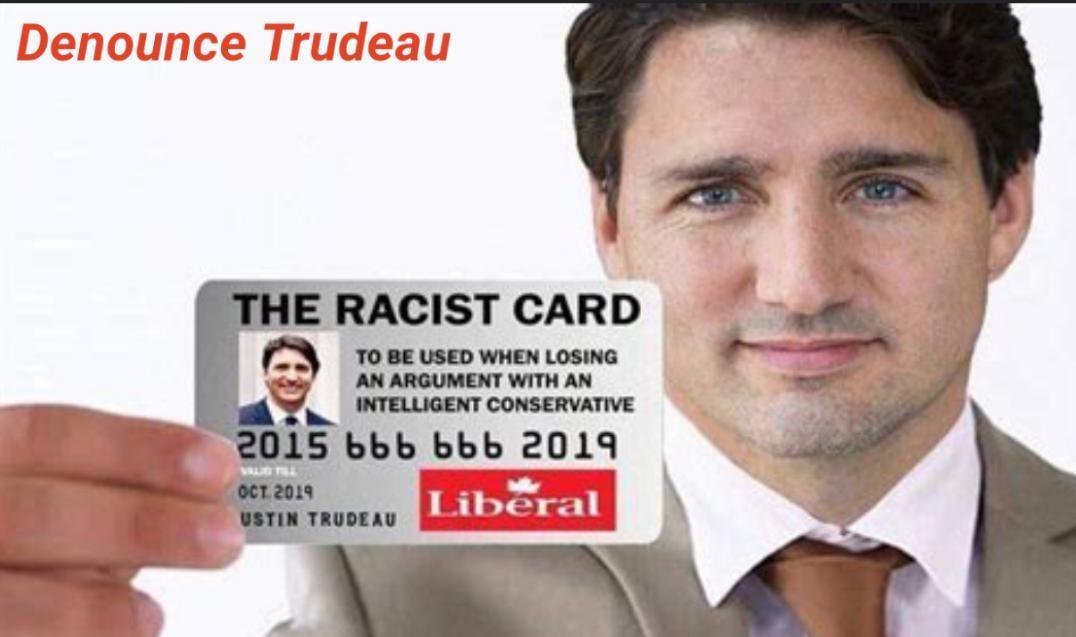 Justin Trudeau’s behind-the-scenes string pullers have developed an election platform unprecedented in Canadian politics– brand anyone who questions or disagrees with their globalist, culture-destroying agenda as racists and bigots.

Advisor/Commie-in-the-shadows Gerald Butts understands the power of the “race card.” Thus far in the federal election campaign the Liberals are spending an inordinate amount of  time dredging up dirt on opposition MP candidates.

Conservative MP candidates are racists. They are bigots. They are haters of Islam. They despise homosexuals, and loathe the transgendered.

If the majority of Canadian voters will buy into this globalist propaganda, Justin will win a second term in office. Ironically, this man claims that “diversity” is Canada’s strength.

Considering this, how would an unbiased voter react to the proclamation? After following social issues related to ethnicity in Canada for decades, CAP will state plainly that never before in modern history have issues of race, racism, ethnicity and “homophobic”  sentiment been at as high a level as they are under the iron-clad grip of Justin Trudeau.

Seems we as Canadians are at each others throats more than ever before. So is Trudeau correct in his pro-diversity proclamations? Not a chance–the very opposite is true.

What an excellent microcosm for the state-of-the-nation. Under King Justin, we live in an upside-down world of propaganda and political correctness. In other words, those playing victim are in fact in control.

A statement commonly attributed the the French political philosopher Voltaire lays this out in basic terms:

Regardless of who originally made this statement, CAP believe it to be entirely pertinent to Trudeau’s “post-modern” Canada. So which elements of society in Canada have been rendered taboo in terms of criticism or condemnation?

The most relevant example has to be MP Iqra Khalid’s M103 “Islamophobia” motion. Within the verbiage, only one identifiable community is specified–Khalid’s own religion, the Nation of Islam. Applying the “criticism” quotation to this situation, what conclusion can be drawn?

Canadians certainly are not welcome to condemn our homosexual communities. As with Islam, there is a verbal weapon at hand to mute  condemnation of this identifiable community– “homophobia.”

Interesting– the same form of terminology for both–“Islamophobia” and “homophobia.” Both play victim in the same manner. Although ideologically antithetical, their methodologies in pushing their respective agendas are remarkably similar.

So is Canada controlled by Islam and LGBT? Not quite– this is too simplistic a concept to be truly viable. In order to get to the heart of the matter, we must look beyond these communities.

When we do so, we find a curious common denominator— uber-globalist billionaire media mogul, George Soros. Ever heard of his “Open Society Foundation?” Likely not–Canadian media never expose this organization, and never write about Mr. Soros. Many believe this is the case because Soros owns our establishment media.

Now, what does Open Society Foundation advocate? As the name implies, open borders within western nations. That’s democratic nations, not totalitarian or theocratic ones.

Their goal is border-erosion, with illegal refugee intake being front-and-centre in this regard. Does Trudeau also advocate this? Yes, he does.

Additionally, Open Society Foundation push homosexuality, transvestism, and transgenderism. Billions have spent to promote these globalist ideologies. Again, this only occurs within western democracies. No China, Iran or Saudi Arabia for this initiative–yet another parallel with Islam in Canada.

To what degree is Trudeau on-board with this agenda? Is he not fully dedicated to the cause? A third example is abortion–another Soros-fuelled agenda. Again, Justin is 100% on board–he demands all Liberal party politicians vote for unlimited mass abortion. Getting the picture here?

Mass worldwide immigration– an Open Society Foundation speciality. Justin is down with it. Some 60,000,000 refugees need a good home within western democracies. A giant portion are Islamic. Are these poor sods being taken in by their religious brethren-nations? Of course not. Saudi Arabia, Yemen, Quatar et al have not accepted even a single Islamic refugee.

The responsibility is all ours, maintain Open Society Foundation. Trudeau agrees. He opened the door for 50,000 odd Islamic refugees to enter Canada. Conversely, how many Christian refugees(there are millions in the Middle East) has Trudeau and Islamic immigration minister Hussen brought to Canada? What, may be five

This is the reality of Justin Trudeau’s Canada. The evidence is overwhelming–every decision Trudeau makes in terms of social issues in Canada is fully aligned with the globalist agenda of George Soros, United Nations, international banking, China, Iran and the rest of the globalist power players.

Now, as the federal election approaches, all this is cast aside( it always has been), and the method for re-election is to brand like cattle all those who question or condemn these behaviours as racists, bigots and xenophobes.

Canada a nation of racists? White Canadians meat-headed bigots and xenophobes? Ever heard of Pakistan, Ms. Khalid? You are from this country, are you not? In Pakistan, Christians must pay an extra tax simply for being Christian. What do you have to say about this? Nothing, of course.

Yet Canada is awful, racist and xenophobic. Take a hike, Ms. Thang– and take Ahmed Hussen with you–preferably to the hot sands of the Sahara desert, never to return.

Has Pierre Trudeau’s multiculturalism morphed into a weapon for the goal of branding Anglophones and Christians racist? Yes, say CAP for Canada. This we believe heart and soul.

If righteousness were to reign, Justin Trudeau would be exposed as the most dangerous political figure in Canadian history. By way of media, he just might be elected for a second four year term.

Democracy in action? Not a chance. Justin Trudeau, along with his father before him, have created a Canada with a singular “demon” community– Anglo-Christian Canada.

Then, millions of Anglo-Christians line up to vote the cretin back into office. CAP label this nothing short of the “Crime Of The Century.”