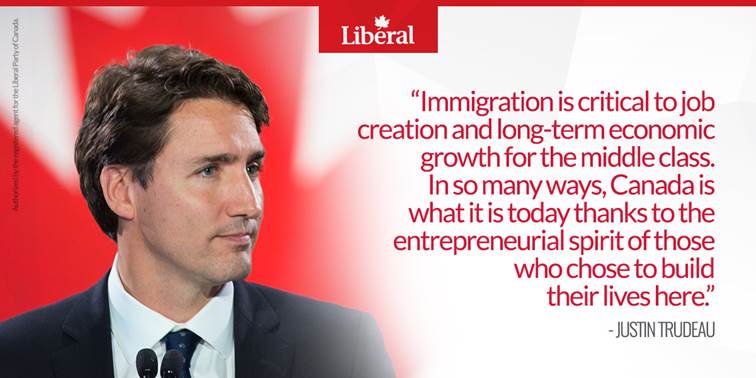 Justin Trudeau has established the highest immigration quotas in Canadian history. Under his iron-clad grip, Canada took in more refugees in 2018 than any nation on earth. Canada maintains the highest per-capita immigration rates of any western nation.

Why? According to “this-gun-for-hire” Somalian drop-in Immigration Minister, MP Ahmed Hussen, this is necessary to fill the void in terms of an aging population and workforce. Mainstream media remain unquestioning as Hussen brings in approximately 300,000 of his Third World brethren to Canada each year.

Why is it that establishment media take a specious approach to the topic of immigration to Canada? Note the affinity with liberal-globalist attitudes toward abortion and transgenderism. No downside, according to CBC. A veritable walk in the park, say editors at the Globe & Mail. Well, they don’t actually make statements of this nature. Rather, they BURY ALL NEGATIVE BY-PRODUCTS of abortion and sex change conversion.

In their arrogance, Trudeau, Hussen and the rest REFUSE to inform Canadians of the nations from which the migrants come from. Which foreign country holds the number one position? Signs appear to indicate this is China. As we know, this is a communist nation.

Demographic projections inform us the fastest growing Third World community in Canada is that of our Islamic citizens. Source nations include Iran, Syria, and other Middle Eastern nations. These nations are theocratic in leadership. No democracy for them. Multiculturalism has no place in these societies.

Now, contrast these people with Old Stock Canada. This generation grew up with democracy. As a result, these folks have a FAR GREATER ability to recognize true democracy from fake and fraudulent TRUDEAU- brand democracy.

Is this one reason why King Justin SHUNS Anglophone Canada? CAP say GO ALL-IN on this one. Consider this concept: These “new” Canadians have little understanding of the MEANING of democracy. They were not raised in a liberal democracy such as Canada.

Therefore, Justin Trudeau would be SO MUCH MORE SUCCESSFUL at trans-sitioning Canada from a democracy to a dictatorship if the Canadian majority have no experience or comprehension of the meaning of democracy.

BINGO. There’s your answer. Immigration from non-democracies ACCELERATES the globalist agenda of Trudeau, Hussen, as well as that of the United Nations and other shady globalist forces. One of these, billionaire globalist banker George Soros’ Open Society Foundation, are dedicated to global population redistribution, as well as a corresponding depopulation agenda. What Justin is doing to Canada fits neatly into the goals of Open Society Foundation.

Imagine a nation where 75% of the population grew up within a nation where a single leader has ABSOLUTE POWER over the country. Is this NOT what Justin Trudeau craves so deeply? Are these historical leaders not those Justin and commie brother Alexandre have lauded on a regular basis? Was father Pierre Trudeau NOT of the same opinion?

Under the scenario, is it not true that the majority might therefore LACK the ability to discern between a true and FAKE democracy? No question in CAP’s mind. Justin is a FAKE believer in democratic process. Put it all together and what do we find?

A calculated, comprehensive  plan of national TRANS-formation– from democracy to dictatorship. Immigration from non-democratic nations speeds up the entire process. In time, our nation MORPHS into exactly what Justin Trudeau wants for national destiny– the marginalization and disempowerment of an identifiable community: ANGLOPHONE CANADA.

Democracy continues to be diluted– which is EXACTLY what King Justin has been working on since day one in office. Apart from immigration, multiculturalism also results in marginalization of Old Stock Canada. In Trudeau’s Canada, Anglo-Christians are a blight upon society— a racist and xenophobic entity hell-bent on making life miserable for non-whites.

Add to the mix the giant abortion numbers in Canada, as well as the sterilization of the male species by way of transgenderism. Heat and stir for FIVE DECADES and what do you have?

Answer: Justin Trudeau’s POST-MODERN CANADA. What the parasitic one forgot to mention is that this vision includes NO PLACE for Canadians of European Heritage. Certainly not hated Anglophones and Christians.

With the Trudeau government, there is always a hidden agenda behind the presentation. One thing hidden is a long term plan of social and historical  REVISION. Under King Trudeau, Canada’s past is little more than a succession of oppression toward non- Anglophone communities. Sir John A. MacDonald is a racist s.o.b. As it happens, re-writing history and demonizing specific communities is a speciality from the totalitarian playbook. Justin plays this to the letter.

Canada, your nation is being STOLEN from the people, and trans-fered into the hands of those working an agenda of national destruction. Pierre Trudeau is the ideological FOUNDER of the movement, and Justin Trudeau is the executor.