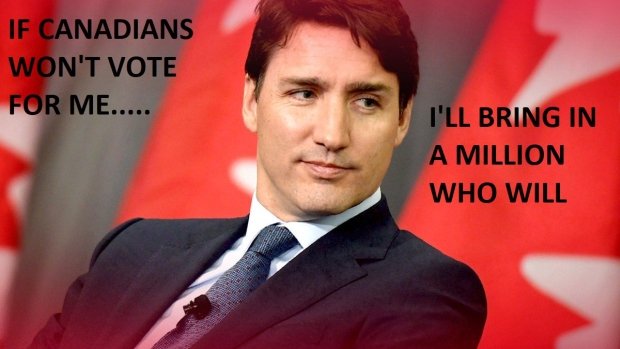 Within the world of Cultural Action Party, national leadership is very much a “binary” affair. In terms of a calculated push of border erosion and general decimation of western cultural identity,  a president or prime minister is either “in or out.”

Out: Donald Trump, Vladimir Putin, Victor Orban of Hungary, as well as a host of other Eastern European leaders. Speaking of Mr. Putin, here is a recent quote:

The Russian leader said Europe  prioritized migrants’ rights so much it mean they could “kill, plunder and rape with impunity” in attack on Western Liberalism which he said had “outlived its purpose”.

Now, contrast this with one basic fact– not one of the ISIS terrorists Justin Trudeau brought back to Canada from the Middle East-– against the will of the Canadian majority–has been convicted of any form of crime.

Quite the contrast, eh? How blatantly obvious that Mr. Trudeau is on the side of geo-political Islam within the spectrum of Canadian politics. Response? So obvious Trudeau had to buy our establishment media in order to cover-up this reality.

Example Of Media Obfuscation: For for years Trudeau pranced around the planet promoting himself as “Global King Of The Human Rights Virtue-Signalling.” Then, upon winning a second term in office, Mr. Trudeau suddenly became “Silent As The Lambs.”

How did CBC frame this dramatic trans-sition? “PM Trudeau Will remain “low-key and business-like” during his second term–not the same messaging in the least.

In truth, there has never been a PM like Justin Trudeau in all of Canadian history. His “uniqueness” is obvious and apparent–he works for every political goal desired by non-Canadian, globalist forces.

Degree to which 37.5 million Canadians comprehend this? Minimal, at best. Within post-modern Canada, media exist for a singular purpose–to prevent 37.5 million Canadians from understanding this political dynamic. Therefore, most obviously, CBC, CTV and the rest are “globalist agents” working on behalf of an anti-Canadian, Anti-Anglophone agenda of national decimation.

In truth, Liberals love “awards.” Are they not constantly handing out globalist -oriented awards and accolates for people like Greta Thunberg, and various hijab-clad “liberal” heroes of the pending new world order?

CAP like the “ring” of this–seems entirely suitable and appropriate. Frankly, “nobody does it better.” Never in Canadian political history has a PM gone to bat for every non-Canadian political entity in this fashion. In CAP’s mind, this is downright sick– a political travesty if there ever was one.

Yet, naturally, not according to even one mainstream media source in Canada. Funny, eh? Media protect Justin’s malevolence toward Anglophone Canada, Christian-Canada, and “Old Stock” Canadians in general.

Do Sikh-Canadians, Chinese-Canadians, and Muslim-Canadians control our media? Ostensibly, the answer is no. Publishers, Editors and leading journalists in Canada are 90% of Anglophone-Christian heritage.

Why then do they promote the dissolution of the culture and identity from which they personally derive?  It is here that informed Canadians can trans-cend the paradoxical nature of government/media structure within our nation.

This makes no sense--therefore, it is cannot be anything other than a pre-conceived, “globalist” agenda of the highest order.

It is here patriots find the “key” to the down fall of the fading, former “Great White North.”