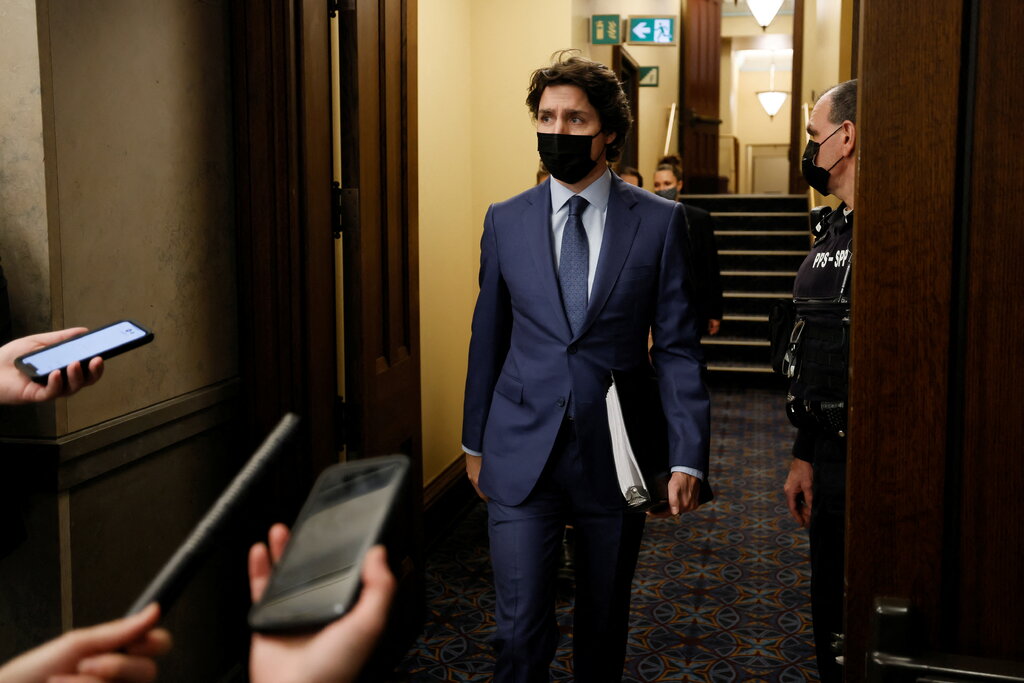 “A system of government that is centralized and dictatorial and requires complete subservience to the state.”

Skill-testing question: Does Canada’s federal government in 2022 require complete public subservience to the state? Correct answer: Not yet. Such is the nature of systems of government based on the authoritarian. The history of totalitarianism reveals that incremental implementation is most effective. Beneath the surface of the Covid pandemic is a seldom-discussed social issue:

To what extent has the pandemic pathed the way for an emulation of authoritarian governance in Canada? The school of political science speaks of core competencies required for conversion to a totalitarian state. Critical in the process is “mass communication to spread propaganda.”

Media is modern society’s method for mass communication. Do mainstream media have potential to function as a vehicle for establishment of a totalitarian state? In place of dictators, there are billionaires, their money, non-profit charities, and control of media.

A cornerstone of state authoritarianism is found in media censorship. At present, Canada is staring this in the face. Prime Minister Justin Trudeau is hell-bent on limiting freedom of speech through internet censorship legislation. Wrapped in a cloak of corporate business concern, a hidden agenda has targeted the keyboards of Canadian citizens.

Authoritarianism, a derivation of the totalitarian ethos, is defined as:

“Favouring or enforcing strict obedience to authority, especially that of the government, at the expense of personal freedom.”

Erosion in the power of Canada’s Charter of Rights and Freedoms is a by-product of Covid regulations. Other than during a time of war, never before in our nation’s history has the rights of individuals been suppressed as they are under the premise of the pandemic.

Speaking of war, we reference our federal government’s incessant attempt to pass legislation preventing legal ownership of firearms. An April, 2022 article from National Post speaks to the effort:

“The idea of a nationwide ban would solve the problem of a patchwork of rules emerging across the country, a situation that could see guns flow from unregulated to regulated jurisdictions.”

Media neglect to mention another solved problem: the disarming of Canadians who are sick and tired of Trudeau’s dictatorial ways. As exemplified by the Truckers Convoy to Ottawa, as well as the current “Rolling Thunder” motorcycle protest.

Totalitarian governments of the 20th century invoked a similar procedure. Upon annexation of Holland, France and other European countries in WW2, seizing citizen firearms was the very first mandate invoked by invading fascist soldiers.

Moving to the topic of leadership, let us consider what defines a dictatorship:

“Form of government in which one person or a small group possesses absolute power without effective constitutional limitations.”

Does Canada have constitutional limitations at present? We certainly do. Yet, these limitations are today less potent than at any point in history other than during a time of war. Media neglect the reason: the coming of the Covid pandemic.

An article from The Spectator in the U.K. speaks to the situation:

“Judging by his behaviour, [Justin] Trudeau has been hoping for some kind of violence ever since the truckers’ movement started. He needed something, anything that could serve as a Canadian 6 January moment so as to arrogate even more dictatorial powers than Canada’s existing state of emergency allowed.”

As a result of the pandemic, never before have non-elected, state-empowered figures held power like they have over the past two years. The finest example being Dr. Theresa Tam. Canadians did not elected this person, nor any provincial health minister. Non-elected is non-democratic– a Trudeau government specialty.

A dictionary definition of Fascism speaks of “a governmental system led by a dictator having complete power, forcibly suppressing opposition and criticism.”

Here we discover synergy in media’s treatment of the Conservative Party of Canada. At no time in the past has such uniformity existed in treatment of an official opposition party. Stephen Harper, racist. Andrew Scheer, bigot. Erin O’Toole, Pierre Poilievre— not exactly either– but their supporters are.

As defined in Wikipedia, totalitarian regimes are characterized through “widespread personality cultism around the person or the group which is in power.”

Enter stage leftist, Justin Trudeau— the most unfathomable political figure in Canadian history. A three-term winner who has done more to benefit foreign nations he has done to improve the lives of Canadians. There is no question that the Liberal Party maintain cult-like characteristics. This we discover in a government which maintain control based not on policy– but rather through ideology. At the root of their success is an emotional charge– a phenomenon common to all dictatorships.

We unearth another commonality. Dictatorships of history accelerate their success through designation of a “villain” community. Step right up, unvaccinated Canadians. Don’t you know? You are responsible for all the troubles in society. Government and media have corralled you into an outsider community. Ostracized, the controlling institutions sneer and jeer in your direction.

Extend to which media reflect what is herein expressed? Zero is the word– government control of media being yet another hallmark of totalitarianism.

Obvious as the back of our hands? It should be– but darn well isn’t. To think that Trudeau accomplished all of this within a six-year time period should boggle the Canadian mind. Based on a consistent line of media propaganda, it doesn’t.

To accomplish these goals, Justin Trudeau has torn a page from the Marxist handbook. Position all decisions as assistance to society’s “suffering classes” and government can get away with anything.