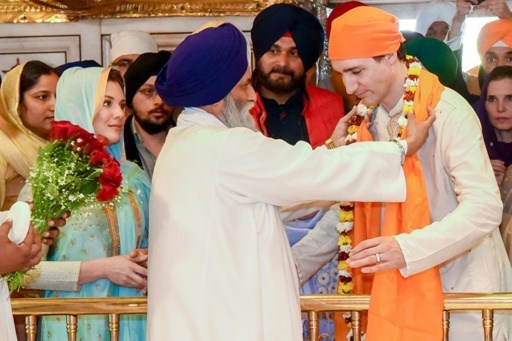 Politics and religion are understood to be the most sensitive of topics. Engaging in conversation regarding either is a slippery slope. Within moments, someone’s ire is up as judgement is passed on two of society’s most controversial subjects.

Christianity, Judaism, Islam, Sikhism. At present, religious belief systems are overshadowed with a by-product of faith: racism and bigotry which result from decades of immigration intake in Canada.

Note our wording– racism in Canada has a direct correlation with migration intake numbers. Interesting to note mainstream media’s take on this. It is with full intention that the press has never taken note of the symbiotic relationship between the two.

If they did, CBC, Globe & Mail and the rest wouldn’t be able to blame racism on Canada’s “Old Stock,” multi-generational communities. As a public control measure, nothing can surpass the visceral impact of the “race-card.”

So it is that our Liberal government is leveraging Marxist methodologies in a divide-and-conquer social strategy. While recent studies tell us that hate crimes against Christians have skyrocketed, Trudeau remains resolute in his approach to “Islamophobia.” It is a scourge which must be eradicated at all costs. Elevating specific faiths above others is a Trudeau-speciality– nobody does it better.

The result is social fragmentation, anger, resentment, and the other goodies which result from a pre-mediated agenda of social division. While Sikhism and Islam are religious priorities, nothing can hold a handle to the rise of the greatest religious force in modern Canadian history:

The religion of Wokism. Those who advocate for it fall into a category of fanatical. In post-modern Canada, Wokism is a religious faith. Since becoming prime minister, Justin Trudeau has transitioned it to a secular form of fundamentalist religion.

As with all fundamentalism, it’s tenets are immutable. Cast-in-stone like a religious Rock of Gibraltar, PM Trudeau is our new-found religion’s saviour. A raging narcissism fuels our PM’s drive for secular sainthood: he shall go down in history not as a prime minister, but rather as Prophet of the post-modern era. The fact that he sold Canada to the world to get there matters not to the media he pays to obscure his true vocation.

Religion comes in a variety of forms. Christianity and Judaism are derived from a belief in a single God, a theology known as Monotheism. Others, such as Hinduism, are referred to as polytheistic. Like the religion of Ancient Egypt, various Gods exists for myriad aspects of existence. A sun god, god of the oceans, goddess of sexuality, et al.

All are essential to a believing woke disciple. Once baptized by government, your basic wokist lives for a purpose: to run down the society from which their predecessors derived. The Woke are masochistic lot, as personified by Canadian journalists of “Old Stock” heritage who spend their time trashing colonialism and other immutable historical conditions.

Contemporary Canada is far from the only example of the cult-like machinations of secular religion. The same phenomenon existed within communist and fascist societies of history. Chinese and Soviet communism, Nazism during World War II.

The thread is one shared among believers in Justin Trudeau’s Woke Revolution. The common denominator being one of ideological conditioning of a nation’s citizenship. More than any factor, it is a government’s propaganda machine–  their purchase of media– which inculcates citizens toward adoption of the Woke belief system.

In place of freedom and democracy, Canadians are stuck with Justin Trudeau’s brand of so-called “Liberalism.”  In no manner is it compatible with traditional Liberalism as known throughout Canadian history.

This brand is Woke Liberalism— known to CAP as pseudo-communism. Those who advance the belief are not unlike religious zealots. As in 20th century fascism, it is rooted in emotional attachment to the cause. Why else can critics logically point to all shortcomings without it impacting the movement in any capacity?

“Italian fascism[of the 20th century] pursued strict management of public feelings. It aimed at a wide and deep control of human thoughts and experiences. That is to say, it built what William Reddy defines an emotional regime.”

Trudeau’s Liberals follow this methodology in no-uncertain terms. Economics, fiscal prudence, deficits be damned. Justin Trudeau can bury Canadians in a mountain of household debt, and what difference does it make? As with totalitarianism, at the end of the day it is all about belief. Fundamentalist religion functions in the exact same manner.

This is why Trudeau and the Liberals can indulge in scandal after scandal, and still remain Canada’s ruling government. Justin Trudeau is not a national leader in a traditional sense. He’s more of a cult leader, an ideologue who rules over the people by spinning visions of a utopian society based on political dogma.

Joseph Stalin, Adolph Hitler, Mao Tse Tung, Fidel Castro. Among all, it was socio-political ideology which ruled their respective societies. Justin Trudeau’s strategists take the “best” of these strategies, updated them with progressive measures like LGBT, and unleashed the program upon Canadian society. Media tow the line in turn.

We come to understand why Justin Trudeau has been so successful in transitioning Canada away from foundations of freedom and democracy. It’s the true meaning of the term “progressive.” Dress up politics as a pseudo-religion, and you are good-to-go.

Dictators of history did so with aplomb. Aspiring dictator Justin Trudeau is right there with them. Carving up Canada into the chosen and the damned, the Liberals and their backers  create a post-modern religion in a faith called Wokism.