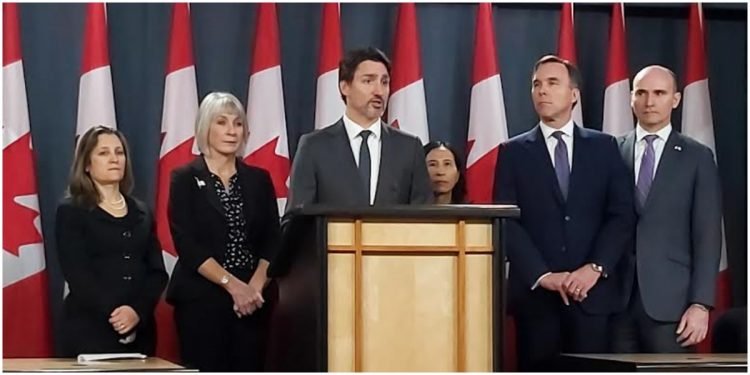 Time was when an official opposition within the Canadian federal government had to push the ruling Liberals to answer questions they do not wish to address. Indeed, all of this is so “2014”— as in, previous to Justin Trudeau’s ascension to the throne of Canada.

In Trudeau’s post-modern Canada, opposition has to push for the ruling Liberals to even hold Parliamentary sessions. Such is life within our dying democratic nation.

“The House of Commons full powers were pushed to the side Tuesday leaving parliament on the sidelines until September.”

“The house voted on the Liberals proposal to suspend full parliamentary sitting until September just before 8 p.m. and it passed the house with NDP support.”

Isn’t it amazing? CAP speak of the ease at which establishment media in Canada play into a liberal-globalist agenda to transition our nation from a democracy into a dictatorship.

CAP has often spoken of the “incremental” nature of Mr. Trudeau’s pre-meditated assault upon freedom and democracy in Canada.

When applying 20th century history to the situation, astute Canadians will understand that step-by-step incremental socialist implementation is the most successful manner in which to steal away a nation from its original form of governance.

Naturally, media complicity is also central to these national trans-formations. Within 2020 Canada, both measures are fully in-place as Justin Trudeau carves out another step on the “totem pole” toward the demise of 153 years of Canadian heritage and identity.

This time up, NDP-3rd World champion Jagmeet Singh is helping the Liberals with their agenda. Why not? No doubt it will be good for his former Sikh-dominated riding of Brampton, Ontario—a white minority Canadian riding.

CAP Theory states the following: Covid-19 is a weapon in a war  against freedom and democracy in Canada. Justin Trudeau is currently leveraging China’s pandemic dissemination to “subtly” move our nation toward the intention of his controllers from the United Nations, Communist China, and geo-political Islam:

Such is the state-of-society in 2020 Canada. CAP expect this to get far more extreme as we move toward 2030 Canada. Notice how the purveyors of Liberal-Globalism— Trudeau’s monolithic media puppets—never refer or reference the “future” of our nation.

What will Canada be all about in the year 2038? Don’t you find it rather odd that the didactic pretensions of the CBC  never include a prognostication regarding any aspect of future Canadian society?

Why? Because this future society will be antithetical to the past 153 years of national identity, like this:

— Democracy shifts to dictatorship after the Liberal Party of Canada transform all federal ridings to Liberal strongholds by way of mass Immigration.

— Multiculturalism and so-called “diversity” ensure that white Canadians have no voice in the matter. All condemnation is to be dealt with by accusing Canadians of European Origin of being racists and bigots.

— The Liberals will control all mainstream media output—a “habit” they lifted from Trudeau-family hero-nation, Communist China.

— By way of PM Justin, control of Canada is handed over to the United Nations, Iran, China and the rest of those Mr. Trudeau works for.

— Media BURY all evidence as 37.8 Canadians are seduced into slumber by the CBC and corporate media entities.

Question Of The Millennia: How many actual Canadian citizens voted for this? A tricky question no doubt. Try ZERO– and go from there. Of course, an astute Canuck will bet dollars-to-Tim-Horton-Donuts that the “Liberal GTA MP Powerhouse” is all for this. MP Ahmed Hussen is a reasonable choice—as is three-time Liberal winner in the GTA, MP Omar Alghabra.

No doubt leading Anglophone-Bashers such as Senator Ratna Omidvar and Toronto Star’s Shree Paradkar are “over the moon” about this.

“It’s a victory for the 3rd World over those awful, meat-head, racist Old Stock Canadians” goes the globalist refrain.

Welcome to the New Canadian Order. Justin Trudeau has transferred Anglo-Canadians to the “bottom of the social barrel.” In their stead comes “3rd World” Canada.

This is the true story of the demise of freedom and democracy at the hands of Justin Trudeau— as well as his Papa Pierre Trudeau before him.

Media say nothing— after all, the main players in media are Old Stock Canadians. What else can patriots expect after Justin Trudeau trans-itioned  our people into the New Canadian Order’s “pariah outlier” community?

How about more of the same forever and a day? Democracy is dying a slow death in Canada, and if it were not for CBC-style media presentation, the people of Canada may well recognize this fundamental truth.