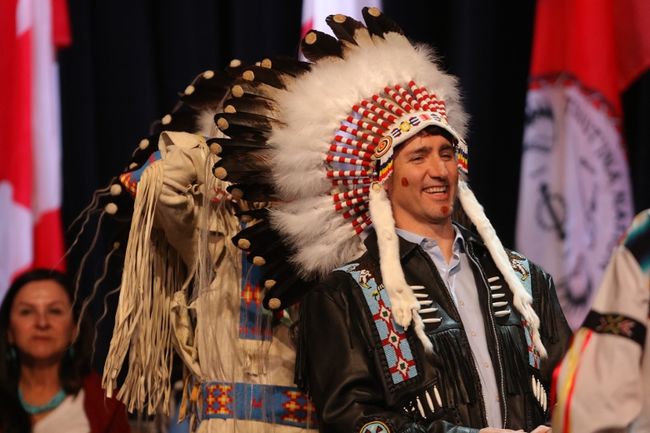 According to the Canadian Encyclopedia, Canada’s residential school facilities were first established in what was known as New France. Such was the original term to define the land under which a group of French colonists established  what would become Quebec in the year 1608.

“Residential schools were created by Christian churches and the Canadian government as an attempt to both educate and convert Indigenous youth and to assimilate them into Canadian society.The last residential school closed in 1996.”

Since this time, former students have demanded recognition and restitution, which resulted in the Residential Schools Settlement Agreement in 2007. A formal public apology by ex-Conservative Prime Minister Stephen Harper followed in 2008. In total, an estimated 150,000 First Nation, Inuit, and Métis children attended these schools.

Subsequent to the recent discovery of the bodies of 215 Indigenous children at a Residential School site in Kamloops, B.C., PM Justin Trudeau was questioned on actions his government will take regarding the ghastly event.

Asked if his government would pay for a widespread search, Trudeau said money has been put aside for “initiatives around residential school cemeteries.”

“I think that is an important part of discovering the truth,” Trudeau said. Thus far, however, Trudeau and media have omitted one piece of truth– the Liberal Party’s role in the residential school system.

Canada’s Residential Schools are historically labelled as being in existence from 1863 to 1998. For 60% of that time period, the Liberal Party was the ruling government.

During the years that Residential School existed in Canada, a Liberal prime minister held office 70% of the time.  Other than founding fathers Sir John A. MacDonald and Sir Wilfred Laurier, the longest standing national leader during this period was ex-Liberal Prime Minister Pierre Trudeau.

Therefore, if he really wanted the truth to be understood by general society, Justin Trudeau would inform the public that his Liberal Party has been a key factor in what he has referred to as an Aboriginal genocide.

Chances that Trudeau will come through with this pronouncement range between zero and nothing. He will never do it. Rather, based upon his track record, the responsibility will fall into the hands of Anglophone-Canada, and its historical predecessors.

Cut from the same cloth is NDP Leader Jagmeet Singh, who this week issued the following statement on the gruesome discovery:

Apart from the fact that unmarked mass graves could easily conjure up an image of Pakistan, Mr. Singh neglected to whisper a word about a Liberal government-First Nations connection.

He never will– and neither will CBC, Globe & Mail, or any other media institution. Not that it is difficult to comprehend why. The death of the Aboriginal children fits neatly into the Great Reset tool box as perpetrated by government, media and our academic world.

This discovery will serve as more “fuel for the fire,” as the running down of English Canada forms the core component for our country’s “Woke Revolution.” Since the advent of Justin Trudeau– not to mention back-up Canada-basher Jagmeet Singh— our society has been subjected to what CAP call “institutionalized self-loathing.”

“The Kamloops Indian Residential School opened under Roman Catholic administration in 1890 and operated until 1969. The federal government took over the operation from the church to operate as a day school until it closed in 1978.”

CAP have no desire to obfuscate the role the Church played in these matters. If it an historical fact, so be it. We do not indulge in historical revisionism– this we leave to our country’s Marxist-infused university system.

Yet, as the article insinuates, the  entity holding ultimate responsibility is the Canadian government–of which the Liberals have held power more often than any other party.

As patriots are aware, Justin Trudeau loves to blame. He also passionately enjoys running down our nation– in particular Anglophone and Christian communities.

Will it be any different regarding the recently discovered mass murders?  Mr. Trudeau will speak of the event in terms of the malevolent nature of our society. No doubt he will once again fail to distinguish between historical and contemporary Canada–a habit he indulges in with full intention. Who knows, yet another formal apology will be forthcoming.

But let’s see him condemn “his own.” Let Canadians witness our PM speak of the culpability of the Liberal Party of Canada in the mistreatment of our Aboriginal communities.

He won’t do it. Justin Trudeau is a opportunist of the highest order. Meaning that if there is an opportunity to vilify Anglophone-Canadian society, he is there with bells on.

Expect nothing less regarding residential schools, or any other historical incident which fits into the Anglophone-Christian bashing agenda of the prime minister of Canada.