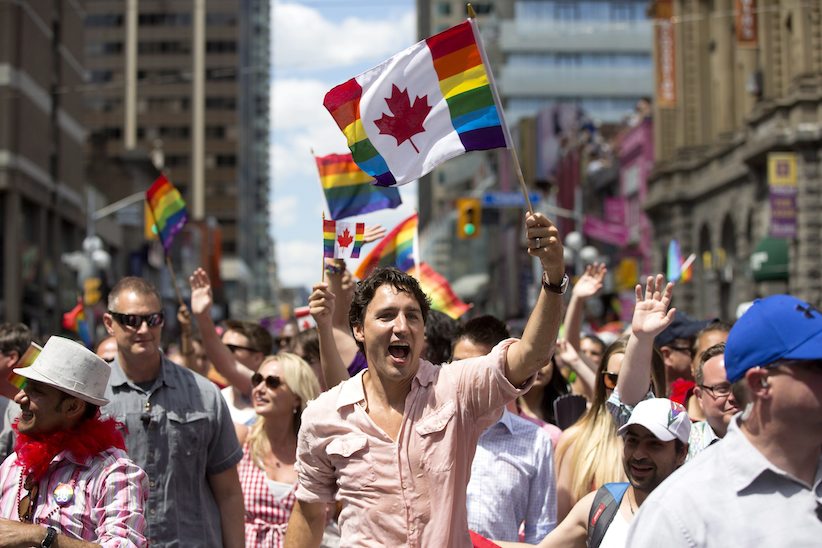 During his romp amongst a crowd which featured half-naked grown ups in the vicinity of young children, Trudeau waxed eloquently if favour of world-wide promotion of LGBT rights.

“This message, that politicians of all different stripes are out to support them, that the country takes to the streets across Pride Month and at Pride events, to support our friends in the LGBT communities, that we are all allies, continues to be an important message here in Canada, and of course, around the world ever more so,” Prime Minister Justin Trudeau said before setting off with Toronto Mayor John Tory and others to begin the march.

CAP has an interpretation of Trudeau’s message utilizing improper English– Justin feels that the promotion of homosexuality and transgenderism are EVEN MORE IMPORTANT in nations other than Canada.

Mr. Trudeau has transformed the traditional role of a Canadian prime minister into a post-modern brand of leadership. This brand does not place Canada as our PM’s number one priority. Nor is developing a healthy Canadian economy a priority.

Justin Trudeau’s has personally chosen to be an international ambassador for homosexuality, transgenderism, and oddly enough, the Nation of Islam. Quite the odd-ball combination.

Who voted for such a thing? Who approved this curious job description? No one at all. The role of a Canadian prime minister is to protect the citizenship. The role is to ENSURE SAFETY of our various communities. Please do tell– how does re-instating citizenship for convicted ISIS terrorists fit into this fundamental aspect of being prime minister? Seeing as it is obvious Trudeau is not doing his job properly, why do establish media remain silent on these issues?

Lots of questions and NO ANSWERS. Transgender Canadians comprise the tiniest sliver of the Canadian demographic. Trudeau backs the movement in its entirety– without questioning any aspect of the agenda– including controversial sex change hormone therapy for young children.

Trudeau is an odd-duck of a PM. His priority appears to be foreign nations, Third World Governments, 7th century religious ideologies as well as the transgendered of the world. Apart from this, Justin Trudeau has little interest in the fundamentals of Canadian governance.

What Justin aspired to is something more lofty– something like to become a globalist ambassador for LGBT, Transgenderism and the Nation of Islam.

A rather odd job description Mr. Trudeau has carved out for himself. Meanwhile, media say nothing.  Canada was not founded for the purpose of advancing homosexuality. Canadians did not fight in World War 2 for the purpose of TRANS-forming our nation from democracy to dictatorship. Not a single Canadian voted for Islam to be elevated within society. Democratic process does not follow the concept that tiny fringes of society are to LORD IT over the Canadian majority.

This is not Liberal Democracy– this is TRUDEAU DEMOCRACY. Between the two there is a world of difference. Justin Trudeau is counting on this difference to win him another four year dictatorship.