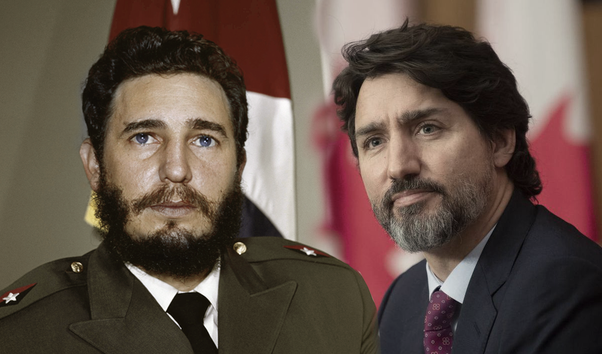 “The United States stands with the people of Cuba in their call for freedom and relief from the coronavirus pandemic and decades of repression,” American President Joe Biden said in reaction to current public protests against government repression in Cuba.

Canadian Prime Minister Justin Trudeau takes a different viewpoint on communism in Cuba. When Fidel Castro died in 2016, Trudeau expressed his “deep sorrow” at the death of their country’s longest-serving president.

Trudeau hailed the former Cuban president as a “legendary revolutionary and orator who made significant improvements to the education and health care of his nation.”

Global Affairs Canada has released a statement stating they are “closely monitoring the situation in Cuba and concerned by recent events.”

My, my– rare to witness such vitriol, isn’t it?  What conclusions can patriots draw from these circumstances?  While the American government issue condemnation of communism in Cuba, Canada’s Liberal government refrain from any form of denunciation.

In fact, they always have– dating back to the entirely sketchy history of Trudeau-Castro relations. According Justin Trudeau, Fidel Castro was a “good family friend.” So much so that the Cuban dictator served as an “honorary pallbearer” at Pierre Trudeau’s funeral in 2000.

As astute Canadians are aware, the Trudeau family– Justin, brother Alexandre and Pierre Trudeau before them– maintain a keen admiration for historical dictatorships. So much so that in 2018, Macleans magazine published a piece verifying the fact:

Entitled the “The Trudeau Family’s Love Of Tyrants,” the article elucidated the admiration held by the family for China, Cuba, and the former USSR.

In this can be discovered what is today axiomatic within society– our nation is headed for replication of the Trudeau family’s preferred form of governance–Communism.

While some political pundits below Canada’s border may disagree, this is the fundamental difference between President Biden’s approach to Cuba’s social upheaval, and that of Justin Trudeau.

The Liberal government of Canada admires communism because one day our country is going to transition to this form of governance.

BURIED BY MEDIA: Child Mortality At Residential Schools Not Due to Mass Murder: Canadian Professor

For Canadian patriots, the pathos contained within is a mighty sad affair. Equally as depressing is the approach of establishment media. CBC, CTV, Globe & Mail and the rest are burying this reality as we speak.

According to a recent article from American establishment media outlet Bloomberg News,  the Canadian prime minister, whose father was a friend of Fidel Castro’s, spoke out a day after U.S. President Joe Biden warned the Cuban government against a heavy-handed response to the demonstrators.

“Canada has always stood in friendship with the Cuban people,” Justin Trudeau said when asked about Havana’s moves to quell dissent.

Cultural Action Party disagree. From our perspective, the Trudeau family do not stand in friendship with citizens of any country–including Canada. Rather, it is the governments of various dictatorships that our prime minister stands in alliance with.