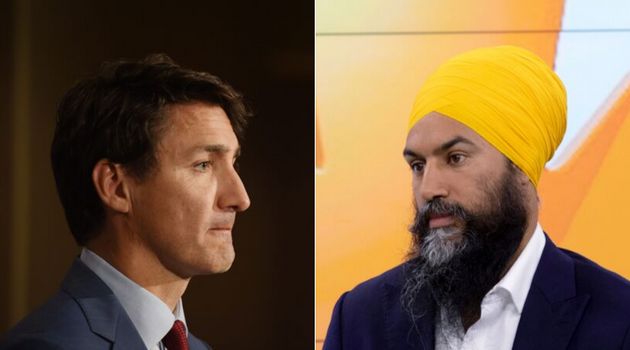 According to NDP federal party leader, MP Jagmeet Singh, he doesn’t  “want the conversation that I have with Mr. Trudeau to be used as a tool in his exoneration, or to be used as a way for him to say, ‘I’ve had a conversation with a racialized leader and now I’ve done my job,'” he said.

Then don’t meet with Mr. Trudeau, because what you describe is exactly what this perpetual multicult groveller is after. Yet again, Justin Trudeau is willing to drop to his knees for Third World Canada, and the precious votes they hold–enough to swing a victory for one party to another.

Welcome to “post-modern” Canada. Any way you slice it, Third World Canada continues to move to the epicentre of Canadian society. The two individuals most responsible for this elemental trans-sition: Pierre Trudeau, and son Justin Trudeau.

In 2019, this has manifest in a political clown-show of the highest order. Obviously, Trudeau’s finest political talents are those entirely outside of the actual PM job description. Not that this would ever impact a privileged member of the Trudeau clan.

The man’s true talents are found in the theatrical. Bollywood outfits, and related dance moves. Playing Al Jolson in blackface is a another skill. Reciting an Islamic conversion prayer while wrapped in Muslim garb at the mosque is another talent.

Yet, when it comes to the fundamentals of the role, those around him will take of that. This frees up time for PM Trudeau to rant on sanctimoniously about every social short-coming he can find regarding awful, racist Old Stock Canada. Meanwhile, he mocks African-Americans/Canadians with his series of blackface(note media are now down-grading to “brownface”) performances when he was 29 years of age, and earlier.

On Thursday, a third instance of Trudeau wearing blackface came to light when a video surfaced showing him with his face, arms and legs painted black while wearing an afro wig.

Message to Globalist Messiah: Canadians with common sense want you out of government, and out of our lives. We have had our fill of this clown-like political figure. Snowflakes, be damned. CAP hereby state that any Anglophone Canadian who votes Liberal on October 21st, 2019, is thereby doing a major disservice to their nation.

Yet, undoubtedly, millions will. Such is the pathos interjected into Canadian politics by way of King Justin, Commie-advisor Gerald Butts, demographic assassin Immigration Minister, MP Ahmed Hussen, and the rest of the Liberal-Globalist culture-killers.

So what is this motley crew’s scheme to save Trudeau’s butts? Grovel. Kneel down before Jagmeet Singh and his turban collection. Informed Canadians, please take note: This entire affair has nothing whatsoever to do with managing the Canadian economy, as well as any other fundamental of federal governance.

Justin Trudeau has tarnished the PMO. He has made a mockery of the role of prime minister. He has created an environment of ethnic and religious consternation, the most extreme in modern Canadian history.

Any one else notice this particular development: Over the course of his for year term, racism in Canada is more extreme than ever. Is it not true we are reading articles about racism almost daily(okay, daily) on racial issues within our society?

Has Justin helped lessen, or perpetuate racism and bigotry during his time in office? Such a basic, fundamental question. So why hasn’t CBC, Globe & Mail or National Post  ever posited the question? Is this not the bottom-line regarding Trudeau’s tenure as PM?Judging by the increase in race-oriented incidents, identifiable Canadian communities are at each others throats more than ever before.

So what has trans-pired with Trudeau’s pending apology? Suddenly, the globalist Jagmeet Singh got a lift. Not based on actual policy, of course–Singh is quite awful in this capacity. No, all his political “brownie points” are related to his ethnicity, his turban, multiculturalism, and racism.

How “post-modern” this is!  Let CAP lay it on the line once again: Justin Trudeau has degraded the office of prime minister. The man has trans-formed the PMO into a pig-circus. Trudeau has done more than put on blackface make-up. He has blackened our federal government, as well as tarnished the legacy of twenty-two previous prime ministers.

None of our former PM’s were saints by any means. Considering this Trudeau fellow within the context of previous prime ministers, the damage is blatantly obvious–so much so heavy-weight journalists such as Andrew Coyne and John Ibbitson must eschew the whole affair.

No matter what media rhetoric implies, Trudeau’s media puppets will sublimate his stupidity. They will smooth over the rough edges. In other words, the tacit messaging will always be: do not vote for parties other than the Liberals. Canadian establishment media are the Liberal Party. This must be kept front and centre at all times.

Due to Justin Trudeau, Canada will once again be pandering and grovelling to Multicult Canada. Boy, is this ever tedious. Yet another apology  to Canada’s chosen Third World communities appears to be forthcoming.

Justin Trudeau has apologized for the blackface idiocy. CAP’s idea for an apology:

” I apologize for running for prime minister of Canada when I knew damn well I was not qualified for the position. As a result, I made a mockery of the office of the prime minister. I made poor choices in both content and presentation. I have embarrassed myself, and our nation by way of my reckless decision-making, and virtue-signalling hypocrisy.”

Now there is a truthful and  honest apology. Canada could move forward from here, as society attempts to rectify the damage Trudeau has done to Canadian society.

Instead, Justin runs to Gerald Butts to figure out how to once again deceive and seduce his way into a second term in office. What unmitigated pathos! End the charade–get this globalist out of office. Furthermore, no member of the Trudeau family should ever hold political office in Canada ever again–that should be a rule.