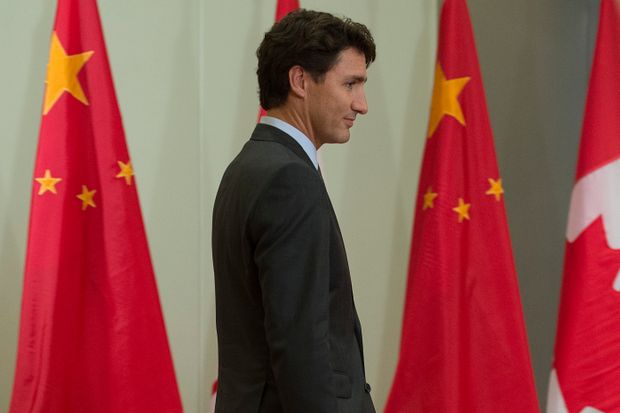 Liberal Industry Minister MP Navdeep Bains says the government is studying Britain’s decision to grant Chinese telecom company Huawei access to its next-generation 5G network, but has yet to make its own decision.

As it happens, Justin Trudeau has been pondering this giant sell-out to the communist government of China for over 14 months. During this time period, CBC and Canadian establishment media have consistently down-played both the relevance, and the danger of completing this China-pleasing initiative.

“The U.K. government has given the green light for Huawei Technologies Co. to build part of its next-generation 5G cellular network, dismissing calls from the Trump administration to boycott the Chinese telecom-equipment vendor over security fears.”

Wanna know what CAP believe this means for Canada? It is a virtual “green light” for China-enthusiast PM Trudeau to grant Huewei the same privilege in Canada. Done deal, say CAP.

Why so confident? Because a Trudeau-led Liberal government is ubiquitously pro-China. Pierre Trudeau, Jean Chretien, King Justin–you name it and a Liberal PM is fawning over the communist behemoth nation.

Liberalism and China go hand-in-hand-– just as Liberalism and Islam are politically interlocked. For evidence, just take a gander at the manner in which CTV, Globe & Mail and Toronto Star are reporting on China’s latest disease export, Coronavirus.

Never have CAP seen such an immaculate response to a lethal international epidemic. Every move a picture– “we have it all covered-off” says the Ontario School Board. “Nothing to worry about”  say CBC. “We have never been better prepared for an outbreak of this kind” says some hack reporter from Global News.

Quite. Why is it that a Canadian Liberal government perpetually support and indemnify China? Has King Justin issued even one statement about Coronavirus?

Of course not. Pourquoi? Because to do so means Trudeau would have to say something negative about the Trudeau family’s “lifeblood” nation. Say no-go for this one–Justin Trudeau never criticizes China, Islam, Sikhism, or any related element in his agenda of post-modern cultural degeneration–that’s a rule.

“It’s critical that we have infrastructure that’s protected– these national-security issues go beyond the traditional aspects.”

Wonderbar. Sound to you like gifting sensitive data access to the communist government of China is akin to a walk-in-the-park?

But you know what–Justin Trudeau will do it— and media will endorse the move. After all, we live in Justin Trudeau-land now. The goal is to trans-fer as much national sovereignty and security out of the country as possible.

These are the things Justin Trudeau has brought to Canada. Conveniently, these are also the decisions media has hidden from the awareness of 37.7 Million Canadians.

READ IT AND WEEP–

David Mulroney, who served as the Canadian ambassador to China from 2009 to 2012, says that would be a bad decision that would amount to Ottawa caving to more than a year of Beijing bullying.

“This is just the latest, albeit one of the most consequential, in a series of bad decisions and false compromises that western governments have made in respect to China,” said Mulroney.

“The result is that Chinese technology, and with its potential Chinese influence, is embedded ever more deeplyin the governance structures of the West.”

Kinda warms the heart, eh? But make no mistake–Justin will give Huewei the approval now that Britain has opened a door for the rationalization of the approval.

Under the iron-clad grip of Trudeau’s so-called “minority” government, Canada appears to function along the lines of a second-rate “call girl.” The dying “Great White North” today exists as little more than a geographic entity dedicated to the whims and desires of China, Iran, Saudi Arabia, Pakistan, Somalia, Afghanistan and Iraq.

Trudeau hands these nations billions of Canadian tax-dollars every year, while not demanding even a speck of accountability from these “trustworthy” nations. What a gang of suckers, Trudeau, Finance Minister Bill Morneau and the rest of the Liberal-China slaves are.

What the British decision “does is provide an easy out for those in government who are seeking one” because they can now pretend that we can ‘manage’ the China risk at the 5G level.

In other words, the whole affair is one giant charade. And of course it is– the PM of Canada is the greatest political charlatan in the history of our nation.

“What is surreal about this is that we have experienced more than a year of Chinese bullying and coercion, all because of legal action taken by Canada against a Huawei executive,” Mulroney said.

“Have we learned nothing?”

Good question, Mr. Mulroney. If we have “learned nothing” it is because CBC, CTV, Globe & Mail and Toronto Star deliver “nothing.” Well, not exactly nothing. Rather, these media puppets play their part to perfection– hiding away critical information for the benefit of Trudeau, Liberalism, Third World, China, Islam, Sikhism, LGBT and Transgenderism.

Despite media obfuscation, the Canada of 2020 is in reality a “born-again” country. In 1867, Canadian was founded. For a century we functioned as a dual English & French Canadian society. In 1968, Liberal Pierre Trudeau became prime minister.

This event marked the beginning of the downfall of our Canada. From this point on we were earmarked as a future globalist nation-state. Fast forward to 2020, and Justin Trudeau is tearing down all the fundamentals of our statehood.

Democracy is dying. China is buying. Islam is rising. Anglophone Canadians are in the process of trans-sitioning to a minority community. 9,000 Christian churches are scheduled to close their doors between 2020-2030.

Did you read this in the Globe & Mail? Of course not–these people work on behalf of geo-political Islam–so they will never  expose a story of this nature.

CAP Bottom Line: A Trudeau-led Canada is a dying Canada. The future group of persecuted people within our borders are not Muslims, Sikhs, First Nations or Chinese– it will be to be none other than Anglophone Canadians.

In fact, the project is already well under-way.