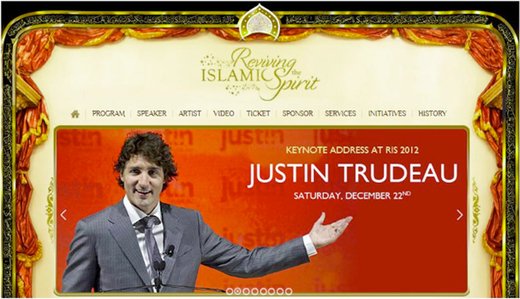 What is it about Justin Trudeau and Islam? Why does the prime minister of a western liberal democracy so infatuated with all elements of the Nation of Islam? Seems hardly a month goes by without our PM pushing the Islamic ticket in Canada.

“Today, Muslims in Canada and around the world mark the end of the Hajj and celebrate Eid al-Adha, also known as the Feast of Sacrifice.”

“Eid al-Adha is a time for families and loved ones to come together to pray, share a meal, and celebrate life’s blessings.

“It is also a chance to reflect on values like community service, compassion, and generosity. Whether supporting a local charity or being there for neighbours in need, Muslim Canadians show us the best of those values all year round.

“Today, let’s celebrate Canada’s Muslim communities, and the many contributions they make to shape our country for the better.

“On behalf of our family, Sophie and I wish all those celebrating a wonderful Eid al-Adha.

Never in Canadian history has a prime minister placed so much emphasis on one particular religious community. Is not the natural result of this to create resentment among other religious communities? Is this not entirely antithetical to the essence of Multiculturalism?

After all, diversity doctrine calls for egalitarianism among all identifiable communities. Why is it that Mr. Trudeau gets away within non-adherence to the concept? By taking a look at Trudeau’s treatment toward non-Islamic religions, we gain serious insight into the social imbalance Justin Trudeau promotes in Canada.

Basically, the man has nothing good to say about the Christian faith. The most Justin will do is issue one of his tedious acknowledgements of Christmas and Easter. Apart from this, our PM has show ZERO interest in the Christian faith. Rather, he has branded Anglo-Christians bigots and xenophobes. Additionally, Old Stock Canada are racist and genocidal.

Never has Justin Trudeau issued a SINGLE STATEMENT alluding to the fact that the fundamental institutions of our nation are British in origin. Meaning–the very office that he holds.

Canadian prime ministerial leadership is not derived from the communities Trudeau favours. Our parliamentary system in rooted in British governance, dating all the way back to the Magna Carta in the year 1215. That’s one heck of a long history.

From this original declaration of citizen rights came the foundation of present-day Canadian society– democracy, freedom of speech, hidden voting ballots, parliamentary and legal structure. Not a single foundational element is rooted in Islamic ideology.

Yet, it is Islam which is the apple of Justin’s eye. How odd.  Our PM eschews all aspects of European-Canadian influence within society. Not only this, he eschews our contemporary secular and religious Christian communities entirely. For these folks, the best they can hope for is to be ignored, for when Justin does make reference, it is always one of disparagement regarding their role in our nation’s history.

Running Old Stock Canadians down as racists, forcing abortion compliance upon his Liberal Caucus, cancelling funding for church and charity groups, and generally ignoring all related aspects of Christian life in Canada is the way Justin rolls.

Then, he informs Canadians he is a practicing Catholic. Yet, the fact is his behaviour exemplifies not a drop of Christian values. Transgenderism? Give us a break– along with no-term-limit abortion, transgenderism is the epitome of anti- Christian sentiment.

On the other hand, we have this most curious prime minister’s attitude toward Islam. Rule #1 as advanced by MP’s Ahmed Hussen, and Omar Alghabra– never criticize any element of Islamic belief. Like Minister for Status of Women, MP Maryam Monsef, pretend that female genital mutilation and child marriage do not exist.

As with MP Iqra Khalid, support the suppression of freedom of speech by way of M103. Per Khalid and National Council of Canadian Muslims requests, transfer tens of millions of dollars from tax-payer pockets to Third World not-for-profit organizations for the purpose of advancing Islamic agendas in Canada.

Is the discrepancy in Trudeau’s approach to Islam vs Christianity not the most obvious, blatant and hypocritical act ever taken by a modern Canadian prime minister?

Damn right it is. So how does King Justin get away with it? The answer, of course, is media presentation. CBC, Globe & Mail, Toronto Star have all BURIED this reality from the consciousness of the Canadian people.

This way, Trudeau stands a good chance of being re-elected, and therefore an ability to continue the disingenuous and inequitable favouritism he displays toward all-things-Islamic.

But here is the real kicker–the thing that eats away at the heart and soul of CAP on a regular basis. The Canadian media are not Islamic– at least not in any obvious manner.

The editors of the Globe & Mail are not Muslims. Nor is the president of CBC. Leading journalists John Ivison and John Ibbitson are of the Old Stock variety. Ditto for Chantal Hebert and Andrew Coyne. The editors of Toronto Star are First World Canadians, not Third World imports.

What gives? The fact is all these powerful political thinkers and publications are actually Anglo, Franco, Christian and Old Stock Canadians. Why then do they protect a globalist agenda which demeans and marginalizes the heritage from which they derive?

For CAP, this is perhaps the greatest mystery within the entire sordid globalist affair. Yes, if these media controllers were Muslim, then it would be understandable why they would maintain a pro-Islamic, anti-Christian stance. But this is not the case.

Talk about “building a mystery.” To CAP, it seems unfathomable. It makes no sense–therefore we can logically deduce that something is very much misunderstood, or hidden, from the consciousness of Canadians.

Within a healthy western democracy, government, media, academia and other core institutions DO NOT work to decimate that from which they derive. Then, we have Justin Trudeau’s Canada. It is a democratic aberration– a self-hating, self-deprecating nation.

Would sociologists  refer to this as a natural, organic occurrence? No way, Jose. Therefore, it must be the result of a pre-meditated, calculated plan of action.

This, folks is globalism. It is an assault upon society as perpetrated by Justin Trudeau, Bill Morneau, Ahmed Hussen, and the rest of the Liberal-Globalist cultural assassins.

And, of course, this is your Canada if Trudeau wins in October, 2019.