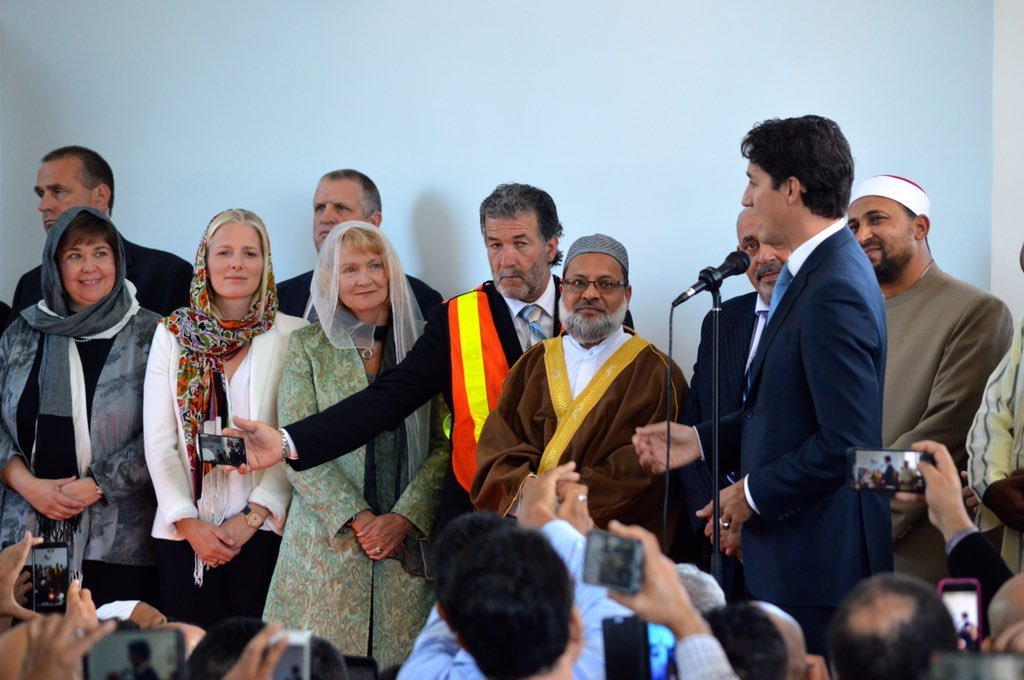 He finally did it. Justin Trudeau stepped foot in a Hamilton, Ontario church on Good Friday. Although some were impressed, other attendees  took the opportunity to voice their true feelings.

“Whenever someone does question him, he just calls them a racist. “It’s division politics and fear-mongering,” said one man.  He added that Trudeau was “only attending St. Patrick’s to PANDER FOR VOTES among Hamilton’s less fortunate. He doesn’t care for the people.”

A most curious aspect of one this affair is Trudeau’s lack of concern and empathy for Canadian Christians, as well as sticking his head in the sand regarding the plight of Christians mass murdered within African and Islamic nations.

Yet, on the flip-side, Canadians have witnessed a full-on dedication to Islamic Canada. Attending various religious services at mosques across the country, reciting the Shahada Prayer(Muhammad is the messenger of God), funding Islamic non-profit organizations, endorsing “Islamophobia” motion M103, branding non-Muslims racist, and other curious behaviours. Mr. Trudeau professes to be a member of the Catholic Faith, yet the above suggests something quite different.

Additionally, Justin is dedicated abortion-pusher, going as far as to DEMAND all Liberal caucus members vote for fetus-destruction on demand. Did you know? Approximately one million abortions have occurred upon Canadian soil in the past ten years. This, in a nation with a problem of an aging population and workforce. Of course, if we are importing one million migrants every THREE YEARS government won’t fret over abortion policy. As it happens, an abortion in Canada can occur at ANY POINT during  pregnancy. Perhaps father Pierre Trudeau picked up this tidbit when visiting with Mao Tse Tung in China. Canada SHARES abortion policy with this nation of 1.3 billion people.

Dedication to Islam, conduit for mass abortion, as well as a supporter of transgenderism– even for children. A strange mix, and non of it reminiscent of a dedicated follower of the Christian faith. Church attendees in Hamilton recognize Justin’s hypocrisy, and as Justin’s carefully-coiffed image continues to unravel by way of scandal, greater society is picking up on what has been hidden for the lion’s share of his tenure: Justin Trudeau selectively supports special interest  segments while shunning the larger Christian community– the very  heritage from which he himself derives.