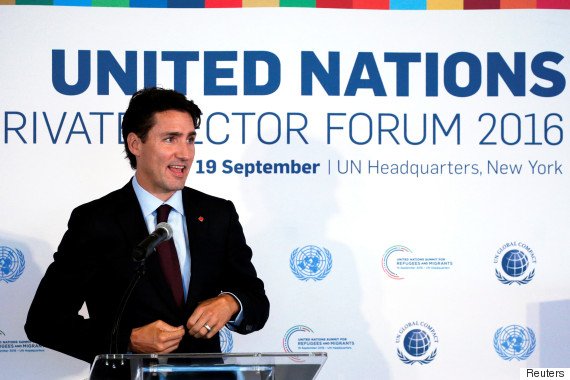 Canada will increase its spending to 1.4 billion Canadian dollars by 2023 from C$1.1 billion currently, he announced at the world’s largest conference on gender equality, We Deliver, positioning his country as a leading donor internationally.

Internationally–yes. Domestically– not so much. Why Justin Trudeau believes he has a personal right to treat Canadian tax-payer dollars as his personal piggy bank is anyone’s guess.

Did Trudeau run for office on a “just watch me give away $50 Billion Dollars to African and Middle Eastern governments” platform? Hardly. What a grand deception. Almost as devious as his “watch me TRANS-form Islam into the dominant Canadian religion”  platform. Never heard about this one till well after Trudeau seized control of our nation.

Wondering why Mr. Trudeau maintains a license to play Robin Hood on behalf of Third World government? CAP do. One reason we wonder is that the Canadian media never inform the public of the reason for Justin’s “Great Globalist Giveaway Program.”

Therefore, the public have to guess. CAP’s guess is Justin Trudeau is working an agenda to trans-form Canada into an entity no one voted for, approved of, or requested. Last time we checked, this is not democracy. It’s an entirely different animal. CAP label this Trudeau-style democracy– a lie wrapped up in human rights virtue-signalling and globalist destruction of national sovereignty.

READ MORE– Are Media BURYING The Fact That Anglophone-Canadians Are Headed for Minority Status?

Justin Trudeau has no right to take the consciousness and destiny of our nation into his clammy hands. Yet, this is exactly what he has done. He has zero training for the role of prime minister. He is not a lawyer or an economist. Therefore, he must carve out an alternate legacy for himself.

Trudeau did this by becoming a political ideologue. Canadians must think like him. What a awful idea!  Basically, Justin wants Canadians to join him  in despising the identity, heritage and history of our nation. No wonder he branded the murder of Indigenous women a “genocide.” This effectively brands Anglo-Christian Canadians as genocidal maniacs. Good job Justin!

Now, King Trudeau is back on the “billions to despotic governments” tip. Not that he ever stopped. Hundreds of millions to Afghanistan, NIgeria, Jordan,  Iran, Syria, Yemen, Somalia and the rest of Trudeau’s “preferred nations.”

Unfortunately, Canada is not one of those nations–at least not Old Stock Canada, Anglophones or Christians. Trudeau works for everyone but these citizens. He works exclusively for Third World/Islamic nations and their diaspora communities within Canada. That’s it. No one beyond these chosen entities is on Justin’s radar for those deserving of respect and fair treatment within society.

So the agenda continues. And it will everyday Trudeau remains prime minister of Canada. Globalist leaders never stop destroying–that’s a rule.