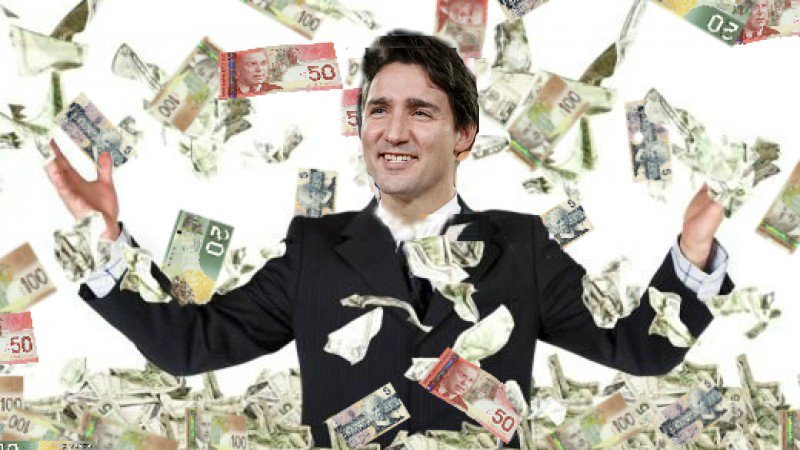 Justin Trudeau’s homosexual obsessions continue. Another day, another massive tax-payer donation from Trudeau to foreign governments, and their social problems.

CAP did the math, and discover that based on the above data, approximately .002% of Canadians are HIV positive. Therefore, it is literally impossible for nearly $1 Billion dollars to be in any manner beneficial to the general population of Canada.

So who benefits? We are living in Trudeau-land–therefore the answer is obvious: Non-Canadians. Now, CAP are not so caustic as to say saving the lives of AIDS carriers has no meaning. Rather, the point is how this scenario continuously plays out under the iron-clad grip of globalist Trudeau.

Big money is spent, and not a single Canadian benefits. Over his four year term as PM, Mr. Trudeau has given hundreds of millions of Canadian tax-dollars to Syria, Afghanistan, Iran and other Middle Eastern nations. Trudeau has provided copious millions to fund abortion in African nations. As it happens, abortion in many of these nations is illegal.

Now, nearly a billion dollars to fight a health issue which barely exists within our borders. Why does King Justin continue to treat our collective tax-dollars as if they are a giant Liberal-Globalist-Islamic piggy bank? Why do establishment media refuse to articulate this fact to the people of Canada?

“Canada is committed to maintaining its leadership in supporting the vital work of multilateral platforms such as the Global Fund to address inequalities that prevent the most vulnerable, especially women and girls, from living healthy and productive lives,” stated Minister of Status of Women/Sharia Law Admirer, MP Maryam Monsef.

“Vital global  work,” says Monsef. Ever heard of the nation of Canada, lady? We understand it means little to you, as you are a dedicated religious fundamentalist. These types always concern themselves first with non-Canadian issues, and then if there are tax-payer scraps left-over, perhaps they will be bestowed upon needy people in Canada.

Typical Liberalism, no? Homosexuality, Islam, Africa, Afghanistan come first. Why wouldn’t they for Maryam Monsef, Justin Trudeau’s Middle Eastern hottie-on-the-side. Makes no difference if no one knows which country she came to Canada from. It is either Iran, or Afghanistan, we are told.

Did you know? Previous to Justin Trudeau selecting this lady as a Cabinet Minister, Monsef had flown to the Middle East to meet with high-ranking Islamic officials. Soon after she flew to Canada, and was handed the Electoral Reform file by Justin Trudeau.

Why her? Monsef was a first-time MP. She was 32 years old at the time. She was raised in a non-democratic, Islamic nation. She had lived in Canada for less than one decade when she was blessed by Trudeau with a Cabinet Position. Electoral Reform deals in depth with democratic process and voting method reform.

Is Monsef REALLY the best candidate PM Trudeau could come up with? Not a frackin’ chance–she was selected for these reasons: Multicultural Optics, Trudeau has the hots for her, she would please his precious Islamic community, and related globalist reasoning

The Swiss-based Global Fund operates on a three-year cycle, with funding from private and public contributors sought in the final year, which in turn finances the next three years of operations.

The last replenishment in 2016 was held in Montreal and hosted by Prime Minister Justin Trudeau. It raised $12.2 billion, with Canada contributing $804 million, a 24 per cent increase from the previous round. The Bill and Melinda Gates Foundation is a strong supporter of the Global Fund, with Melinda attending the 2016 conference in Canada.

Bill and Melinda Gates? Justin must have been in heaven-on-earth as he got to super-charge his megalomanic tendencies by rubbing elbows with the Gates zillionaires.

In a statement, the Global Fund said it warmly welcomed Monsef’s announcement, calling it a “tremendous investment in global efforts to end the epidemics of HIV, TB and malaria.”

“Yet again, Canada has demonstrated outstanding leadership in global health — especially in sexual and reproductive health and rights, a key priority for the Global Fund,” Sands said in a statement released Thursday.

Wonderbar. Joy To The World, Canadian dollars are serving to assist those in need. The suffering, the sick, the oppressed. No benefit for Canada and its tax-paying citizens? Who cares– Justin Trudeau says we have “no core identity,” therefore why supply a “no core” with billions of dollars? Give the money away to the rest of the world. This way, King Justin will look really, really cool. It’s worth it!

Simply put, Justin Trudeau is a fool, and a puppet. Islamic nations and their diaspora representatives continue to milk Canada for its dollars based upon pushing the ego-buttons of Canada’s King of Kings.

“You will leave unique legacy behind you,” says half- Saudi Arabian citizen/Deputy Minister of Foreign Affairs, MP Omar Alghabra. Ego-food for Trudeau. “You will be a hero in the eyes of the Nation of Islam,” says IMAM Mohammed Hussein, before delivering a supremacist sermon at an Ottawa Mosque.

“You are a post-modern hero of homosexuals,” says a LGBT Pride community leader. This is how one succeeds politically with the Liberal-Trudeau-Globalist hegemony.

What a sad-state-of-affairs. As it happens, the entire process is devoid of democratic process. No one voted for this agenda. No one voted for a Carbon Tax. Nor did we vote for Islam to be entrenched in society, Sharia Law, FGM, “Drag Queen Story Time,” or billions of dollars to be handed to despotic Middle Eastern and African governments.

Besides, how do Canadians know the funds actually end up helping the afflicted. Are Canadians to believe it is impossible for an Islamic government to appropriate the funds? Why do establishment media never allude to this possibility?

See what CAP is driving at here? Your nation–Canada– is one heck of a lot LESS democratic than the average Canadian would believe. While it was like this to some extent previous to King Justin, this man put the entire dynamic into overdrive.

A prime minister who works for all nations other than the one he was elected to lead. The people of Canada now recognize this as they prepare to vote Trudeau out of office in the upcoming fall election.

Or do they? Media’s job is to smooth out the edges, and obscure the truth to maximize votes for a prime minister who hates his own country, and diligently works toward our eventual demise as a free and democratic nation.