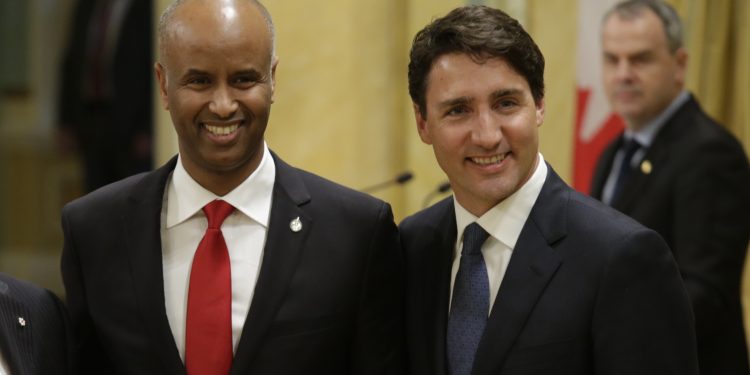 By way of the iron-clad grip that globalist forces have upon Canadian society, reality is morphing into something far stranger than fiction.

Take Canada’s relationship with the African Nation of Somalia. First, a few details:

Somalia has no democracy, no immigration, no refugees and no Christianity. 99% of the population is homogeneously Muslim. Somalia has been branded one of the most dangerous nations on planet earth. Did you know? Somalia has the distinction of being a country with the highest rates of female genital mutilation in the world.

It’s government is brutally totalitarian, as disease and poverty continuously ravage their society. Meanwhile, among all this wreckage, the prime minister of Canada is working for the citizens and government of Somalia.

“Since 2015(when Trudeau became PM), Canada has allocated $89.3 million to address drought- and conflict-related humanitarian needs in Somalia, according to Global Affairs Canada.”

“Canada also provides humanitarian support for approximately one million Somali refugees living in neighbouring countries through its funding to the UN Refugee Agency.”

“While Somalia has taken great steps in recent years toward peace and stability, the country remains vulnerable to both natural disasters and conflict,” ex-Minister of Immigration, Refugees and Citizenship Ahmed Hussen, a former Somali refugee, said in a statement.

“Canada stands in solidarity with Somalia and the millions of Somalis requiring humanitarian assistance in the face of drought and insecurity.”

Naturally, half-citizen Somalian MP Ahmed Hussen is lying. In no manner does “Canada stand in solidarity with Somalia.”

The truth is that MP Ahmed Hussen stands in solidarity with Somalia– not the Canadian people. Why wouldn’t he? This man is a citizen of this nation. Since day one in office, Mr. Hussen has been hustling the Middle East and Africa into the dying Great White North. CBC and the rest do their part by obscuring these facts.

IN CAP’s opinion, Hussen lives in Canada for one specific reason–to overwhelm our Old Stock populations with his chosen 3rd world people. You see, MP Ahmed doesn’t like Canada, and certainly not our Anglophone communities.

Due to this personal affectation, Justin Trudeau handed one of the most powerful positions in government to the African ingrate. For the past four-plus years, Hussen has been flying back and forth to Africa and the Middle East to set up migration pathways for his brethren-people to move to our country, and live off Canadian worker tax-dollars.

Any patriots out there ever visited Edmonton’s Somalian Heritage Museum? Pretty doubtful, as few Canadians are aware of this masterpiece of a museum.

Here’s the thing about it though: Canada has no Somalian heritage. It simply does not exist. Somalia played no role in any aspect of the development of Canadian history, heritage, governance, law, education, or any other aspect of our society.

Prior to the advent of Globalist Justin, Somalian populations in Canada were next-to-nothing. So why does Canada have a Museum of Somalian Heritage? For CAP, it sounds more like a piece of globalist propaganda than anything else.

Yet, this is Justin Trudeau’s “No Core Identity” Canada. Seems that in 2020 a 3rd World community can have government pay for a heritage museum–without a single speck of heritage actually existing.

Then again, CAP can see why this would occur. PM Trudeau transitioned Parliament and Cabinet into a “Three-Ring Globalist Circus”— meaning that incompetent and inexperienced rookie MP’s like Maryam Monsef and Iqra Khalid are politically empowered without deserving the appointment.

Why this Ahmed Hussen fellow became such a powerhouse within the Liberal government is one of the greatest curiousities in Canadian political history. Almost as bad is MP Maryam Monsef, a Liberal MP of unknown Middle Eastern origin.

In CAP’s opinion, Hussen is a hired-hand of globalist decimation. The man does not like Anglophone Canadians. He is only seen in photos with his “own kind” — never with white citizens. Search Google Images and see for yourself.

“Due to the ongoing civil war in the southern part of the country, professing Christians in Somalia have faced persecution and sometimes death. There are no church buildings in the country. Nor is there any legal protection for Christians, some of whom meet in underground churches.

“Paramilitary groups in Somalia have also engaged in widespread looting of Christian graves.”

International Christian Concern reported that four Christians working to help orphans in Somalia were beheaded by Islamist extremists when they refused to convert to Islam.

In 2013, the Ministry of Justice and Religious Affairs released a directive prohibiting the celebration of Christian festivities in the country.

Then, Somalian citizen Hussen states that Canadians who even question Canadian immigration policy are racists and bigots. In truth, this man is a “Multicultural Fascist”–an absolute fanatic regarding divesting Canada of its national heritage, history and cultural identity--not to mention those who derive from the identifiable communities that created Canadian identity.

CAP Opinion: Anglophone Canadians are a dinosaur community for Trudeau and Hussen. We are the Liberal’s post-modern “relic people”— insignificant as a fresh snowfall in Nunavet.

In the minds of the globalists, Old Stock Canada exists for a singular purpose–to finance the trans-formation of Canada from liberal democracy to socialist dictatorship.

MP Ahmed Hussen is perhaps Canada’s key instrument to get the job done. CBC say nothing. Globe & Mail write nothing. In the meantime, Trudeau & Co. continue to walk Canada down the plank toward our cultural–not to mention economic– decimation as a free and democratic society.

Oh, and btw– Somalia is # 3 on the Open Doors Foundation list of the world’s Top Christian Persecuting Nations.