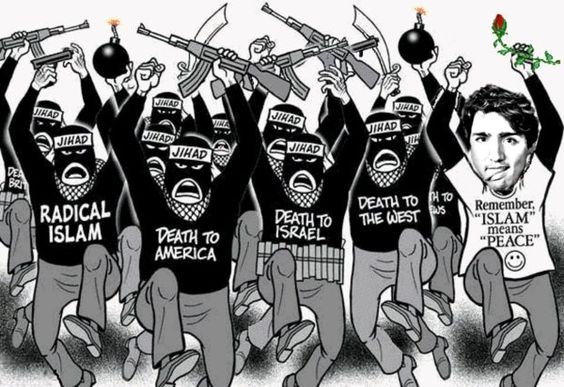 While countries like France, Britain, and the USA are taking out terrorists overseas with airstrikes and stripping others of citizenship, the Trudeau government is doing none of that. Conversely,  the Trudeau Liberals have repealed legislation that gave the government the ability to strip citizenship from terrorists.

A fundamental role of a prime minister is to maintain a safe and secure environment for our citizenship. Justin Trudeau will have none of that. The man obviously has a soft spot not only for Islamic theology, but for the militant branch of Islam as well. How odd.

Why ON EARTH would our PM dedicate himself to a 6th century religious belief system while at the same time as supporting LGBT rights, including transgenderism for Canadians of any age? It makes no sense. Islamic ideology advocates for Sharia Law and female genital mutilation–a crime in Canada– not to mention a breach of Justin’s sacred Charter of Rights and Freedoms. The same holds true for child marriage. Yet, inexplicably, Mr. Trudeau remains silent on ANY condemnation of these behaviours– even after Muslim women have been quoted in media stating FGM has occurred upon Canadian soil.

What messaging is our establishment media delivering on this most peculiar behaviour? Has even one media outlet explicitly stated that Trudeau is a dedicated supporter of the Nation of Islam? No, they have not. In this manner, they PROTECT Trudeau. Why would western media do so? The publishers, editors and journalists within in the industry are not Muslims–at least for the present.

In fact, like Justin Trudeau, they are Canadian-born citizens. In the main, their religious heritage is Protestant and Catholic. Globe & Mail, Andrew Coyne, Chantal Hebert– all continue to obscure the truth regarding Trudeau’s unusual affiliations.

It is completely obvious that Trudeau’s political and ideological orientation is one which includes admiration for communism(Castro, Mao, China) and Islamic ideology(terrorist hand holding, silence on sharia law, fgm). Exactly what will it take for media to call a spade a spade?

Cultural Action Party Of Canada predict the truth will emerge in time, but ONLY after King Justin looses his crown. Upon his defeat, sensible Canadians should rejoice in knowing the greatest odd-ball in the history of Canadian politics has been removed from office. As for liberals, most likely they will just continue on being liberal. How sad.