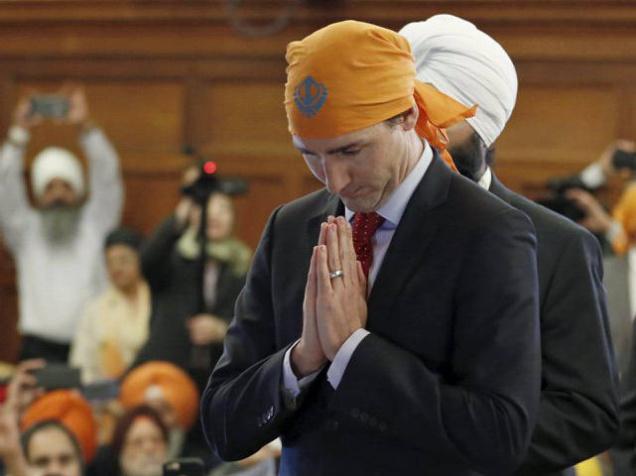 Justin Trudeau  will speak at the Ross Street Gurdwara in Vancouver, then partake in the city’s Vaisakhi Parade to mark the Sikh holy day.

The visit comes a day after the Liberals agreed to make a change to the 2018 Public Report on the “Terrorism Threat to Canada,” which has drawn the ire of the Sikh community.

For the first time, the report listed Sikh extremism as one of the TOP FIVE EXTREMIST THREATS in Canada. No-go, say Sikh community leaders as Trudeau swiftly accommodated their wishes. And why wouldn’t he? After all, Trudeau appears to have far more concern for the half million Sikh Canadians than for the 30-odd million Anglophone folks.

Why is this the case? Because in Trudeau’s mind, these people are the FUTURE OF CANADA This is what our PM alluded to when declaring our country a “post-modern” nation– a politically correct euphemism if there ever was one. In reality, the “post” element refers to “post- Old Stock Canada.”

From day one Justin and his pit-bull immigration Minister Ahmed Hussen have been working to elevate Third World Canada to the top of our social food chain. In “no core identity” Canada, Anglo & Francophones are discouraged from maintaining community identity. This played out in Trudeau’s plethora of apologies to various “minority” communities(nothing minor about them) and special interests groups. The underlying message, of course, is English Canada is racist and Anglophones are a collective of xenophobic bigots.

Additionally, Trudeau FORCED his Liberal caucus to support mass abortion. Did you know? Over the past decade approximately 1 MILLION abortions have taken place in Canada. Why are the majority of  Canadians UNAWARE of this fact? Because media have NEVER informed us. This in a nation with a major problem of an aging demographic and work force.

Yes– if you want action from PM Trudeau, you must be a “new” Canadian. Obviously, he doesn’t know any other kind exist.