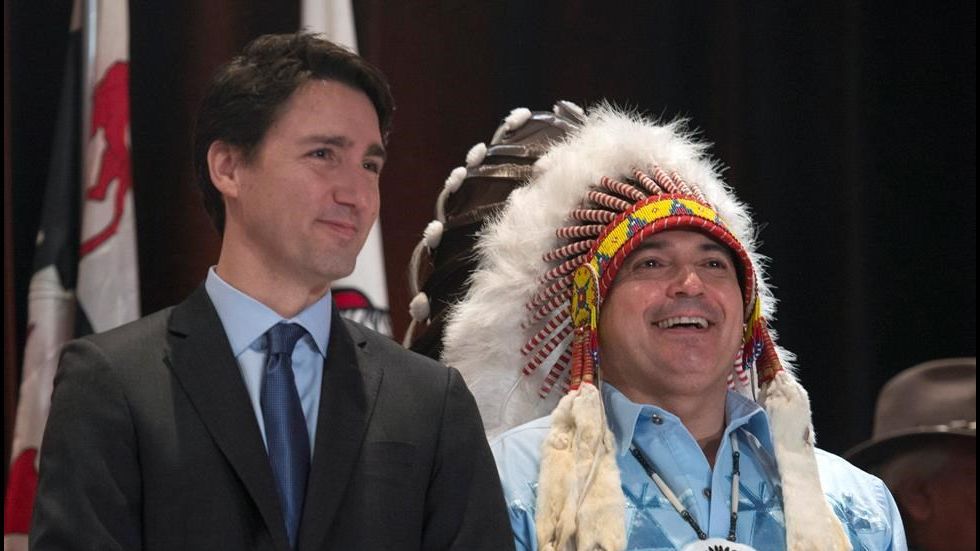 Justin Trudeau says violence against Indigenous women and girls is “not a relic of Canada’s past,” and the justice system has failed them. Is he unaware it is HIS JOB not to fail Indigenous Canadians? He has been in power for nearly four years. Why is he not PERSONALLY responsible for the so-called contemporary oppression against First Nations communities?

“To this day, the safety, security, and dignity of Indigenous mothers, daughters, sisters, and friends are routinely threatened,” Trudeau said. But Mr. Prime Minister, did you not routinely threaten ex-Minister of Justice, Jody Wilson-Raybould? Was it not YOUR GOVERNMENT which threw this First Nations community leader out of your Cabinet?

The inquiry report uses the term genocide dozens of times, starting in the first paragraph of its preface: “This report is about deliberate race, identity and gender-based genocide,” chief commissioner Marion Buller writes.

Message to society: Anglophones and Christians are genocidal maniacs. Quite. See how our country is systematically being stolen from us? Is it not MORE THAN OBVIOUS a plot to railroad white Canadians as supporters of Aboriginal genocide is the underlying theme of this movement?

Cultural Action Party of Canada predict that if social dynamics such as this continue, powerless Anglo-Christian Canadians will  TRANS-sition to the nemesis community of Canada— a virtual second class citizen community. Some will escape this globalist prison sentence–but only the RICH. As it happens, the Trudeau government’s taxation programs are designed to trans-form wealthy Canadians into Middle Class Canadians.

Thus, poor and lower income Canadians will transition to exactly what Trudeau, Immigration Minister Ahmed Hussen and company want for them. They will become SECOND NATIONS CANADA. In Trudeau’s mind, this is PAYBACK for what the descendants of the founders of Canada are doing to  First Nations communities.

A logical hypothetical theory– therefore one which Canadian media will not advance IN A MILLION YEARS. Justin Trudeau LOVES running down Canadian heritage and history. It is not without a purpose.

The idea is to weaken English Canada’s place within society. The goal is to REMOVE ALL ELEMENTS of pride within Anglo, Franco and Christian communities. Loosen our grip on Canadian institutions. Reduce our power, render us historical and contemporary VILLAINS and ultimately, STEAL OUR COUNTRY FROM US.

This is Justin Trudeau. It is anglo-basher MP Ahmed Hussen. It is part of a pre-meditated agenda of globalist seduction. As we have learned from history, the destruction of a political and social order tends to find a specific SCAPEGOAT to assist in the game-plan.

Anglophone Canada–you are it. And these forces are FAR FROM DONE. In fact, they could just be getting started. The necessary infrastructure is now in place. Government, Media, Academia, Health Industry(Transgender), Courts(Charter), Judges, Lawyers.

Marxism DESTROYS HISTORY. The less people understand a nation’s past, the easier it is to manipulate a nation’s future. This is the very reason why Justin Trudeau continues to demonize Canada’s past. It is, in fact, a methodology to SEIZE CONTROL of Canada’s future. It’s Marxism 101, but don’t expect establishment media or our university professors to inform us of these facts.

They are on the side of the Anglo-haters, regardless of the fact that many of them PERSONALLY come from Anglo-Christian backgrounds. In no way is this an “organic development” Rather,  it is wholly manufactured by the three-headed hydra of cultural destruction: Government, Media, Academia. Buyer beware.