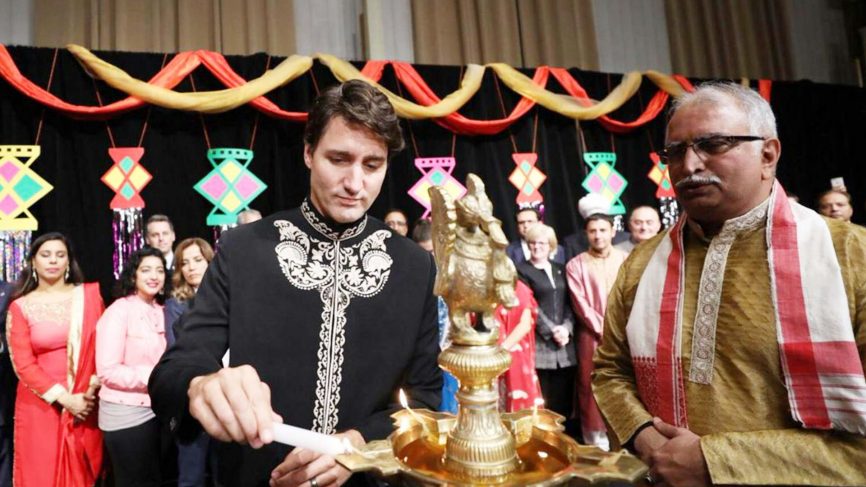 Prime Minister Justin Trudeau picked up a shovel Saturday to lend a hand with sandbagging efforts, as he visited an Ottawa community hit hard by rising floodwaters. According to media, he assisted the volunteers for 15 minutes.

As he was shaking hands with locals in Constance Bay, a  resident confronted the prime minister to complain that his visit had SLOWED DOWN sandbagging operations.

“Do you know how long you’ve held up people from picking up bags?” said the man. “You and your security are blocking the roads. What you’re doing is insincere.”

Fitting, as Justin Trudeau specializes in insincerity.  Trudeau is insincere regarding assisting with flood prevention because he is insincere in EVERYTHING he does– save one particular behaviour.

Justin wants a brand new Canada. Every move he makes is for the purpose of re-defining our nation for the future. But what exactly is his new definition of Canada? This is not crystal clear yet– nor is it supposed to be. We do know what Trudeau believes Canada IS NOT.  According to him, we are “post-modern nation” with no core identity. Seeing as our nation once had a bi-cultural English & French identity, we can conclude this identity is dead. After all, father Pierre saw to this when he single-handedly cancelled this component of society and forced multiculturalism upon an unsuspecting public.

Chances are son Justin PM  also prefers a nation devoid of English Canadian identity. For this purpose, he selected a perfect soul-mate as immigration minister, MP Ahmed Hussen. This Somalian refugee has a GIANT chip on his shoulder regarding all-thing-British. Why wouldn’t he, when Somalia experienced a CENTURY-LONG conflict with Britain. Military campaigns, resistance movements, treaties– the whole nine yards.

Yet Canadians are supposed to believe this fellow takes an unbiased, objective approach toward immigration to our country? Not a chance. Besides, this is the reason he was chosen for the position in the first place. He hates the Anglophone world, and Trudeau wanted a right-hand man who shared his degree of antipathy toward English Canada.

Sensible(non-Liberal) Canadians can SMELL the insincerity of Mr. Trudeau. Let’s hope the sentiment from the flooding incident carries over to the voting booth in October, 2019. It’s SINK OR SWIM  as voters decide whether or not to hand another four years to a prime minister who cares more about the health and welfare of Third World citizens than those who voted Trudeau and his insincerity into office.