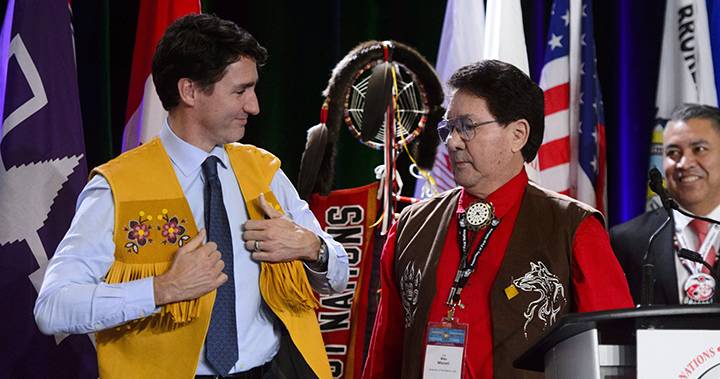 Apparently, Canada continues to take “proactive measures to destroy, assimilate and eliminate Indigenous peoples.” Not according to an independent third-party international tribunal, but rather according to the prime minister of Canada, Justin Trudeau.

The Rwandan genocide, also known as the genocide against the Tutsi, was a mass slaughter of Tutsi and moderate Hutu in Rwanda, which took place between 7 April and 15, July 1994 during the Rwandan Civil War. The scale and brutality of the massacre caused shock worldwide.[5]

Most of the victims were killed in their own villages or in towns, often by their neighbors and fellow villagers. Hutu gangs searched out victims hiding in churches and school buildings. The militia murdered victims with machetes and rifles. An estimated 500,000 to 1,000,000 Rwandans were killed, about 70% of the Tutsi population.

Justin Trudeau has now placed the murder of 1200 Aboriginal women in the SAME CATEGORY. A Cambodian genocide  was carried out by the Khmer Rouge regime under the leadership of Pol Pot, and it resulted in the deaths of between 1.671 and 1.871 million people from 1975 to 1979, or 21 to 24 percent of Cambodia’s 1975 population.

Justin Trudeau believes the murder of First Nations women equates with the Cambodian massacre, and has placed Canada’s treatment of First Nations on the same level as this act of genocide. Indeed, this is how much respect Trudeau has for Canada, its history, and its original founding communities.

End result? Canadians are forever branded “genocidal.” The unspoken culprit is English Canada, and its Anglophone peoples. This situation brings about a profound thought: With Justin Trudeau as prime minister, who needs enemies?”

It is obvious Canada has a prime minister who ABHORS his own country. Not communist nations like China. Not theocratic dictatorships such as Iraq. Not human rights-violating, sharia law supporting, female genital mutilating Somalia.

No, it is CANADA Justin Trudeau has stamped and labelled an evil, racist and genocidal nation. WHY?

This is turning out to be the Canadian political mystery of the century. A national leader who HATES his own nation. Yet, incredibly, millions will vote for Justin come election day in October, 2019.

One of Mr. Trudeau top political skills is branding as racist any politician or citizen who disagrees with his globalist agenda of destruction. The “race-card” has thus far been an ace-up-the-sleeve in this regard for Trudeau and his gang of cultural assassins.

The accusation does WONDERS for our government and the multicultural organizations he provides with millions of our tax-dollars. Accusations of bigotry and xenophobia have thus far functioned as a silver bullet to shut down all opposition to a globalist plan to demonize Anglophone and Christian Canadians. Coincidence? Not at all.

It’s all in the cards. The enforced societal TRANS-formation of Canada is backed by powerful international forces which function as string-pullers within the vacuous mind of Justin Trudeau.

Just how much damage will PM Trudeau inflict upon specific identifiable communities within Canada? The answer is simple– as much as he POSSIBLY CAN. If re-elected, the continued assault and erosion of traditional Canada will continue. Justin will NEVER STOP.

With his genocide declaration– a reckless, ill-informed and ignorant gesture intended to demonize Anglo-Christian Canada— Trudeau has brought the decimation game to a whole other level. Scary stuff–but not nearly as frightening as the idea that for as long as this man lives, he will dedicate himself to the trans-formation of Old Stock Canadians into the demon community of our nation.