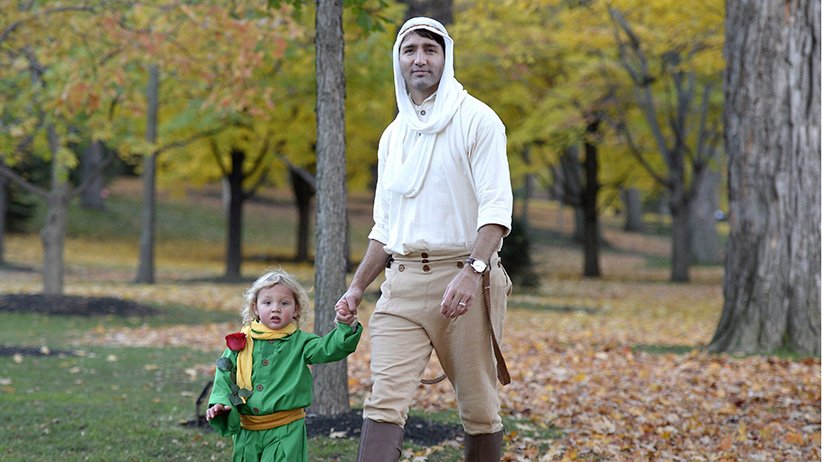 “The invitations had said it was “black tie”, with an “Arabian Nights” theme in the form of belly dancers and Middle Eastern music. More than 500 guests showed up. All the men wore tuxedos. Except Mr. Trudeau,” the Telegraph report said.

Blimey. That is wild stuff. Now, if this little tid-bit was known throughout Canada, how would it impact voters come October 21st, 2019? This would arguably bury PM Trudeau permanently, as Canadians come to understand the political aberration that is Justin Trudeau.

Therefore, the news is sublimated. CAP do not claim this has been 100% omitted from Canadian media presentation–we have read a few lines on this in several different mainstream articles.

Yet, this critical aspect of the equation is not front and centre. Why? Please do tell- is there not major difference between wearing the full-on blackface get-up at a costume ball, or Halloween event, and wearing it at an event where every other male attendee is wearing a tuxedo?

Damn straight there is. Conclusion? Yet again–ad infinitum– CBC, Globe & Mail and the rest take the edge off the trans-gression.

Pure Trudeau-ism, pure globalism. One guest told the British newspaper, “We were taken aback when he walked in, but it just didn’t seem to register with Justin”

Quite. CAP play psychologist: What does this tell common sense(non-snowflakes) about the mind-set of Mr. Trudeau? He is incredibly “special.” He has a right to circumvent the event, and play dress-up while all other attendees conform to the dress code.

Trudeau has a streak of mania inherited from mother Margaret. So obvious–yet not once articulated within Canadian media. It is one thing to put on a mask or basic costume. It is quite another to cover yourself in black from head-to-toe, don a crazy-assed Alladdin crown, and prance around the party like an overgrown pratt.

Mania. Narcissism. Pathological immaturity? This guy is the son of a three-term former prime minister of Canada. Therefore, he has a responsibility not to look like a jack-ass clown at  social events where his celebrity status will result in multiple photos being taken.

How buffoon-like this is. At this stage of the game, it is almost impossible for media to actually defend their boy, so they do the next best thing–omit as much incriminating dirt as they possibly can.

Does this not all fit together like an 8-year old’s lego project? So why has media not once alluded to these truisms? Darn good question– no wonder it is never posited within Canadian society.

At a circus, the clown figure is often the main event. So what is the case when a clown swindles his way into becoming prime minister? Simple–the country turns into a circus.

We need him gone. But who are “we?”  Here is a salient question for sure– CAP believe specific segments of Canadian society need him gone. How about Third World Canada? No, Trudeau works exclusively for them. Sikh Canada? Not a chance– Trudeau’s Cabinet and caucus are over-represented by the Sikh community.

LGBT? Transgender? Not a chance. Justin and trans-pusher MP Randy Boissoinnault are in full support. Sex change at 16- years of age? Not a problem in the least. Muslim Canada? Please! This community is the apple-of-Trudeau’s eye.

No–it is English Canada that needs him gone. Anglophone Canada, Franco-Canada, First Nations and Christian Canada. Pourquoi? Because these are the true suffering communities within our nation.

These are the citizens Trudeau and butcher-boy Immigration Minister MP Ahmed Hussen have targeted for the past four years. Their actions are not benign–they are punitive. One million Third World immigrants within a three-year period, says Somalian citizen, MP Ahmed Hussen.

It sucks! So why would any Old Stock Canadian want this status for their own community? Sensible question, not a peep on the topic from Trudeau’s media puppets. What, is Andrew Coyne not astute enough to comprehend this social dynamic, and write on the topic?

Of course he is– but he won’t. Why? Because Old Stock Canada is today our nations’ only invisible community. This must change– and fast.

For four years King Trudeau has worked for these entities. After four years, Canadian society is at its most fragmented point in modern history. The fragmentation exists for a purpose: to weaken society to the degree that a new “Canadian Order” will be interjected into our nation.

What is this “order?” CAP will inform: Globalist Third World Canada is king. Islam is the chosen religion. Democracy recedes. Freedom  of speech declines, in tandem with freedom of the press.

The Christian faith is vilified. Getting the picture? CAP think you should, because all these developments have been in effect since the day Justin Trudeau was planted as PM.

It began in 1971 with father Pierre Trudeau’s multiculturalism. At present, under son Justin Trudeau, Canada stand at the edge of political abyss. What patriots see when looking over the edge is the death of 152 years of Canadian culture, identity, and heritage.

Then, millions of Anglophones vote King Justin. It is, indeed,  the “Crime Of The Century.”

1 thought on “Justin Blackface: Trudeau Was ONLY Male Not In Formal Wear At 500-Person Event”