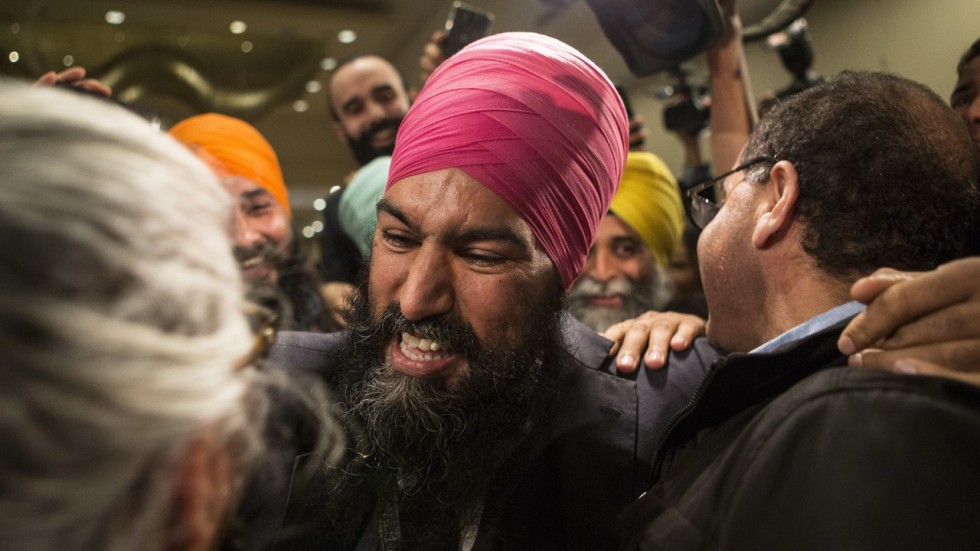 “In a development on the issue of the Khalistan Referendum voting in Canada, the country’s National Democratic Party (NDP) threw its weight behind the polling, calling it the basic human right of Canadian Sikhs enshrined in local and international laws.”

What a strange, strange country we have in post-modern Canada. Jagmeet Singh, leader of Canada’s New Democratic Party, spend his time working not for our country, but rather for Sikhs in India.

“The NDP leader’s statement is important because the party is an ally of Prime Minister Justin Trudeau’s government.”

Which party, Mr. Singh? PM Justin Trudeau’s Liberals, or the Khalistani Revolutionary Party of India? Then again, with a quisling like Trudeau at the helm, both parties are likely to have the same political goals.

What we have here is properly labelled an absurdity. Because Jagmeet Singh is a protected commodity by way of Canadian media, 98% of our citizens will not come to understand this situation.

Do tell, fellow patriots– why is Jagmeet Singh working for Sikhism in India rather than putting all his political energy into Canadian issues?

Answer: because he can get away with it. Such is the state of Canadian society. In 2022, we are residing in Justin Trudeau’s “no core identity” society. Having no core, Mr. Singh is free to concentrate on politics in India with no push-back from mainstream media in Canada.

Singh is, along with Trudeau, one of media’s coveted darlings. And why not? Who other than this man is responsible for locking in Justin Trudeau as PM until late 2025? Thus preserving what CAP refer to as Canada’s “Woke Liberal Socialist Revolution.”

While responding to a question about the Khalistan Referendum and the resulting diplomatic rift between Canada and India, the NDP leader stated: “Some people are spreading false information to create division, distract and misinform the public.”

Poor, suffering Singh. People are interfering with his efforts toward Khalistani state independence. A light-bulb moment arrives: if Singh cares so much, why doesn’t he fly to India and join the Sikh-Khalistan independence movement?

Because he is banned from entering India, that’s why.

“In December 2013, Singh became the first sitting member of a Western legislature to be barred from travelling to India. He was denied a visa by the Indian government while he was a member of the provincial parliament (MPP) in Ontario.”

Exactly how much work has the New Democratic Party leader done for Khalistan? The answer is, a heck of a lot:

“Singh failed in his attempt to move a motion in Ontario in 2016, in which he criticised the Indian government for the 1984 anti-Sikh riots and sought to term the atrocities genocide.”

CAP attempt to unravel the idiocy:

There is Canada, and there is India. Jagmeet Singh is leader of a federal Canadian political party. Therefore, his job is to work on behalf of Canadian interests, and not those of Khalistan, Pakistan, or Afghanistan.

Jagmeet Singh is a dual-loyalty politician. He doesn’t like Anglophone Canada. If he could, he would sever Canada’s ties to the British Crown.

Reducing the NDP from 46 to 25 seats in Parliament, Singh offers his take on Canadian society:

“Canada is a place of racism, of violence, of genocide of Indigenous people.”

Loves Khalistan, hates Canada. A perfect fit. That is, within the structure of Justin Trudeau’s Woke Revolution, as guided behind the scenes by Klaus Schwab’s World Economic Forum.

Total amount of criticism from legacy media in Canada: zero– not one darn word. Why would that be? In this regard, CAP can only speculate:

Jagmeet Singh was strategically placed by globalist forces to become the leader of the New Democratic Party. As such, he is considered an “untouchable” by establishment media in Canada.

A complete travesty it is.