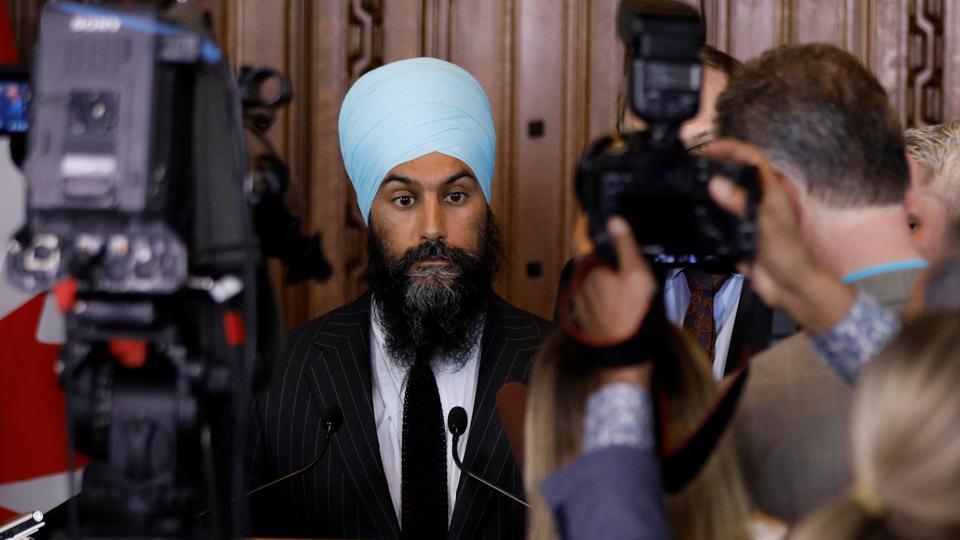 You can say that again, Canadian media. Despite politically correct prostrations, in March 2022 New Democratic Party leader Jagmeet Singh sealed his fate as a political leader.

“The Liberal government is a failure on the environment,” Singh tells the CBC.

Then why did you lock them in for an additional three years, buddy-boy? The question can be applied to any and all of his criticism of the Trudeau government. Why is it that legacy media refuse to point this out?

Little did Jagmeet Singh know that he would transition public opinion of the NDP to progressively negative upon signing his pact with Justin Trudeau. Permit CAP to eschew the details and get straight to the point:

Mr. Singh’s signature locked-in Justin Trudeau as prime minister until autumn 2025.  Remaining Canada’s neo-dictator for a minimum of ten years, the NDP has provided the PM with extra ammunition required for a mighty task:

Canada’s transition from free and democratic society to a socialist nation-state. Patriots pick up on a tangible trend: any criticism of the PM by way of Jagmeet Singh rings hollow-as-hell.

Done like dinner? His goose is cooked? Certainly doesn’t appear that way. CAP never thought we would say this, but Jagmeet Singh is possibly a more baffling politician than  Trudeau himself.

Together, these two political aberrations pack a mighty punch. If one wants to see Canada tossed in a trash bin, these are your go-to guys. Throughout the past five years as party leader, Singh has consistently railed against his nemesis communities.

He has a problem with Canadian Heterosexuals:

“We must acknowledge that the colonial history of our country has actively had a harmful impact on 2SLGBTQI+ people.”

“To brazenly not follow public-health guidelines puts people at risk and that is something that we’ve seen with extreme right-wing ideology,” he told reporters.

Love you to, Jagmeet. To further illustrate Singh’s “hate-hate” relationship with Canada, we move to the present day:

Given the status of woke liberalism and its communist affectations, Canadians should expect this sentiment. We note the fine details. No verbal reference to actual veterans. Priority given to Canada’s “victim” communities. Somehow the NDP supremo always transitions Canadian achievements into a condemnation of our country.

Meanwhile, media has not a word of condemnation for Jagmeet Singh. What a curiosity it is. What is it that makes this character a political untouchable? His hairstyle?

In 2013, Singh was denied a visa to India for raising the issue of the 1984 Sikh massacre. He became the first Western legislator ever to be denied entry to India.

“He saw a country wracked by poverty, illiteracy & disease. So he lead a revolution that uplifted the lives of millions. RIP.”

Singh has been NDP party leader for over five years. When he began, they held 46 seats in Parliament. Today, they hold 25 seats. Unlike the Conservative Party— and even the Liberals, CBC and corporate media refrain from all criticism of this man.

Why? The New Democrats are today a shadow of their former selves. Mr. Singh seems to believe that repetition of cliche party policy from years gone by can seduce voters into believing his false sincerity.

The days of party founder Tommy Douglas, and even Jack Layton, are dead-as-a-doornail. In 2022, Singh exists because Trudeau exists. The purpose of the NDP has been reduced to back-up quarterback for our PM’s “Woke Revolution.”

Yet, there he remains. No internal in-party fighting. No questioning his leadership, or potential replacement. In a nutshell– no nothing.

Why does Jagmeet Singh retain a privilege that isn’t even available to the prime minister of our country?

A former lawyer who served as a provincial politician in Ontario, Singh became the first member of a visible minority to lead a national political party in Canada when he won the New Democratic Party leadership in 2017.

Neglected at the time was the fact that Mr. Singh was literally parachuted into a Vancouver suburb to secure a seat as a Member of Parliament. Lacking a connection to the Burnaby, B.C. riding, within two months of arrival his MP seat had been secured. Perhaps it helped that next to white-minority Richmond, Burnaby is the most 3rd World-oriented riding in the Greater Vancouver area.

From MP to NDP party leader was another hop, skip and jump. As reported by CBC News, Singh raised 53 per cent of all the money collected by the four candidates. His support was largely drawn from his home region of the Greater Toronto Area(3rd World-dominated Brampton), which alone represented two-thirds of his fundraising.

How fascinating. For one thing, who knew that community members in the GTA–meaning Sikh political stronghold of Brampton, Ontario—  cared so deeply about election results 4000 km away in Vancouver?

Such were the sketchy circumstances surrounding Singh’s rise to the top of the NDP Party totem pole. Once he got there, he began to indulge in a hobby shared by PM Justin Trudeau:

Playing the “race card” to run down those who ideologically oppose his brand of globalist politics.

Was Jagmeet Singh planted in the office of leader of the New Democratic Party? If so, how did it occur. The first clue, and in some ways the only clue, is found in an affiliation with the World Economic Forum.

Political pundits have picked up on the affinities between Jagmeet Singh, and Prime Minister Justin Trudeau. Both are WEF-disciples. Could it be that Singh became NDP leader to serve as a back-up for PM Trudeau? Is it not true that Singh has on more than one occasion rescued Trudeau from being toppled as prime minister?

Is the goal as manipulated by the WEF to maintain Liberal government rule over Canada in perpetuity? Cultural Action Party believe it to be the case.

We uncover the degree of coercion and manipulation which exist at the base-line of Canadian federal politics. To circumvent public knowledge, the Liberal government appropriated establishment media, “purchasing” the press in order to deceive the citizens of our country.

It’s a wicked game, all right. Post-modern in essence, the socialist seduction of Canada continues unabated.

5 thoughts on “Jagmeet Singh Loses All Credibility, Why Is He NDP Party Leader?”