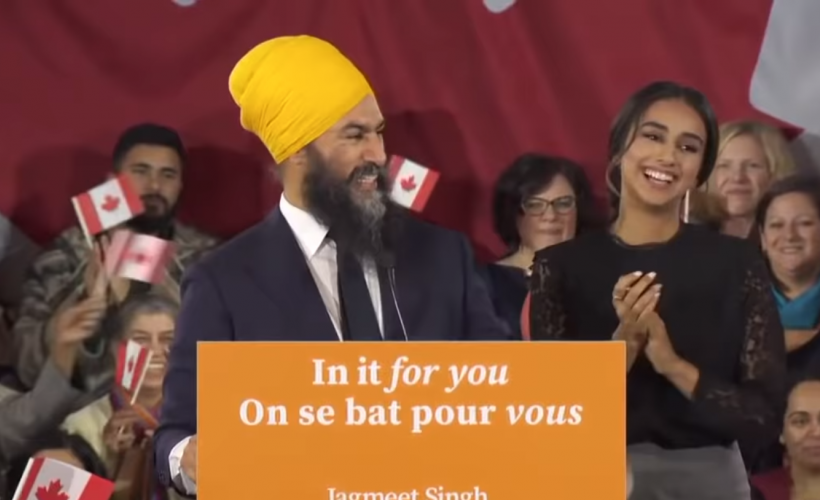 This week, the Conservatives and Liberals voted down a Bloc Québécois motion to remove a prayer that begins the day’s proceedings in the House of Commons.

NDP Party Leader Jagmeet Singh voted in favour of its removal. It’s becoming increasingly clear that Mr. Singh has a problem with Canada’s ties to Britain, in addition to its official religion of Christianity.

As reported by the National Post, “the 30-second prayer is non-denominational”– a dubious claim at best. The prayer includes a reference to God. Much to the chagrin of Mr. Singh, the Sikh God Waheguru is not the deity being referenced.

We uncover a consistent pattern in the politicking of NDP Leader Jagmeet Singh, as he articulates in the following:

“I don’t see the relevance of it [ties to Britain] and I don’t think that most Canadians do,” Singh told CTV News in November, 2018. Not only does the NDP Leader maintain an animus toward Britain– he thinks even less of Canada:

“The reality is: our Canada is a place of racism, of violence, of genocide of Indigenous people.”

Extent of media condemnation the NDP Party Leader? Begin at zero, and continue till you get to nothing. You really have to wonder how people with this degree of animosity gain leadership positions in Canadian politics. Then again, Justin Trudeau is our prime minister.

This week, Canadians expressed their feelings on Jagmeet Singh in direct terms. Mr. Singh visited the office of Peterborough-Kawartha NDP provincial candidate Jen Deck. Upon which protesters began to yell “Traitor!” and “Not welcome!” as Singh exited the office to a waiting SUV.

Mr. Singh’s hatred of Britain was not the motivation. It could be, if media expressed it properly. The main motivation is found in anger toward the politician for propping up Justin Trudeau’s pseudo-dictatorship until late 2025.

A dastardly act it is. Worthy of copious amounts of scorn, mainstream media has little problem with it. There sits Justin Trudeau with the lowest percentage of public support in history, resulting in the most slender of minority governments. In this context, Jagmeet Singh has the audacity to guarantee Trudeau’s iron-clad grip on society for an additional three years.

What is the purpose of this World Economic Forum member and federal party leader? To work on behalf of the Liberal Party?  To decimate our country’s history and heritage? For the purpose of branding non-3rd World Canadians racists and bigots? Perhaps all of the above.

The prayer that “Canadian” Jagmeet Singh wants removed has been a part of House of Commons daily proceedings since 1877.  The current version, which was updated in 1994, reads like this:

“Almighty God, we give thanks for the great blessings which have been bestowed on Canada and its citizens, including the gifts of freedom, opportunity and peace that we enjoy. We pray for our Sovereign, Queen Elizabeth, and the Governor General.”

Not good enough for Jagmeet Singh, as well as the mass of woke warriors supporting him. Have you heard the news? Everything associated with the foundation of Canada must go. Conversely, all that is associated with 3rd World Canada, Sikhism, Islam, LGBT, and Transgenderism must be promoted till the cows come home.

Now for the bad news: this is our Canada. It well appears that Jagmeet Singh lives for the purpose of running down both contemporary and historical Canadian society.

Are readers aware? Mr. Singh is presently banned from entry to India, the birth country of his parents. The Indian government do not want this person setting foot on their soil. If our citizenship would smarten up, we would be demanding the same regarding Jagmeet Singh’s presence on Canadian soil.